Lessons from a failed socialist water program in Detroit apply well beyond the city limits. 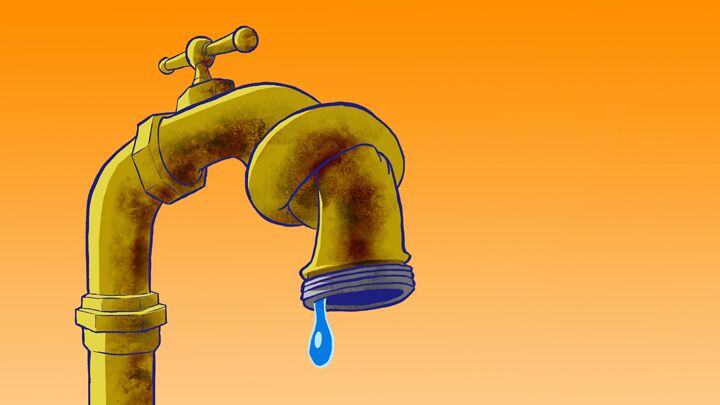 Lessons from a failed socialist water program in Detroit apply well beyond the city limits.

The United Nations says there is a humanitarian crisis in Detroit. It claims the city is violating its citizens’ basic and fundamental “human right to water and other international human rights” by shutting off water to those who refuse to pay. “The households which suffered unjustified disconnections must be immediately reconnected,” it states.

The Guardian newspaper sides with the UN report. Detroit cutting water service to households for non-payment is “economic shock therapy at its most ruthless and racist,” said the paper (June 25).

Yes, Detroit is making global headlines. But for all the wrong reasons. Sadly, the lessons that should be learned are completely missed. And the policies that destroyed a magnificent city are promoted as solutions to national problems.

In March, the city of Detroit revealed that a full half of its residents weren’t paying their water bills. Of 300,000 accounts, almost 150,000 were delinquent.

It might seem odd that Detroit has among the costliest water rates in the country—despite its location adjacent to the greatest source of fresh water on Earth. But because so many people are not paying their fair share, the burden is shifted to paying customers. Rates are high because each paying customer is essentially paying for two people. Water rates are set to go up another 9 percent this year.

But the city’s ability to pass on rate hikes reached the saturation point.

When water rates rise, fewer people can afford the water, so they stop paying. When enough people stop paying, politicians can raise rates all they want, but you can’t get something from nothing. At 50 percent noncompliance, this is where Detroit is today.

Yet because the Detroit Water and Sewerage Department (dwsd) is so heavily indebted (it owes over $6 billion and cannot borrow more money), it needs to squeeze all it can from its few honest customers to keep the water flowing through thousands of miles of antiquated and leaky pipes. Otherwise the agency goes bankrupt, and the water goes off for everyone. And the agency is on the verge of bankruptcy—owing creditors an outrageous $20,000 per water account! And that is if each of its 300,000 account holders actually pay their bills.

Not that dwsd’s deadbeat customers, who currently owe $120 million, will make much of a splash in the department’s debt, but it needs to start somewhere.

So the city decided to do what logic, common sense, and economics demand—something it should have done decades ago—and what would have avoided this whole situation in the first place: Shut the water off.

What happened? Mass deaths to dehydration? Disease epidemics? Child welfare agents breaking down doors to take children away from parents who couldn’t afford to provide water? No.

In May, Detroit sent out 46,000 cutoff notices to people who refused to pay their bills—some of them for eight years or more. What happened? Within 24 hours, 60 percent of people had paid their bills in full. Of those remaining, another 40 percent had paid within 48 hours. Consequences produce results.

But even for those who legitimately couldn’t pay, the city had welfare programs already in place to make sure they could have running water. These programs existed for years, but many people chose not to use them when they could, deciding instead just to not pay their bills at all. Seventeen thousand Detroit residents are now enrolled in such plans that base payments on each customer’s financial situation and ability to pay.

“The majority of our customers [who] are in delinquency status, they just built a culture of, ‘You’re not making me pay—I am not going to pay,’” said dwsd deputy director, Darryl Latimer.

When the squeaky water faucets and non-flushing toilets illustrated that they were not just entitled to other people’s services—and that if you don’t work, you don’t drink—people paid. Those who legitimately couldn’t pay got the help they needed.

All those media sob stories carried by the New York Times, Seattle Times, Huffington Post, et al. about the poor single mother of multiple children, covered in tattoos and with dyed orange dreadlock hair, dressed totally inappropriately for any job, who is going back to school on government programs to study homeland security, but has all that threatened because her water was cut off because she can’t afford to pay for it—and oh, the government is obviously racist and violating human rights to boot—look a little different after examining the facts.

Here is the reality in Detroit. People didn’t pay because liberal-minded city do-gooders thought they were showing love to people by not cutting their water off when they did not pay. The city would just cover it. Other people would just pay a little more. No harm done.

In May, Detroit sent out 46,000 cutoff notices to people who refused to pay their bills—some of them for eight years or more. Within two days 76% of them had paid their bill.
But harm was done—to all involved: those who refused to pay, and those who were forced to pay for the deadbeats. And on top of that, the dwsd is now billions in debt to people it has little chance of repaying. How is that showing love?

The entitlement mentality in this once-great city formerly known for its entrepreneurial spirit became so ingrained that even other government agencies stopped paying their water bills. City-run golf courses, a sports stadium, and the state fair grounds also reportedly owe the water department millions.

Detroit’s crumbling city-owned electrical grid is evidence of this same destructive entitlement mentality. Last year, Kevin Orr, Detroit’s emergency manager, said the city would shut down the utility after a string of high-profile power failures. The 100-year-old utility’s massive debts, disintegrating transmission lines and old technology made the company, which was once valued in the hundreds of millions, less than worthless—despite having a monopoly to service government-owned commercial centers like Wayne State University, Detroit Public Schools, Joe Louis Arena, Cobo Hall and the Detroit Institute of Arts. Privately owned Detroit Edison will take over the customers.

The Detroit Public Lighting agency is now a shell of its former self: peeling paint, dirty floors, empty offices. On a recent visit, Detroit reporter Charlie LeDuff described it this way: “It looked like a neutron bomb went off in 1959.”

As LeDuff notes, the last time the grid was mapped, officials used a 1960s-style board with pins and colored string. In the last four decades, not a single dollar has been invested in upgrades. Nine employees are left to fix and maintain the 88,000 lights and 1,400 miles of electric line.

Why has Detroit Public Lighting collapsed—while privately owned Detroit Edison is thriving? Maybe it has something to do with the fact that, for one of these companies, customers who don’t pay get their electricity turned off. For the other, having your neighbor pay for your “free” electricity became a human right. Guess which is which?

This type of thinking has so saturated what was once the 11th-biggest city in America that half of the entire city came to believe they were entitled to something they did nothing to earn. A city-wide culture of dependency resulted, with hundreds of thousands of people coming to rely on “free” water and sewer. Hence the massive shock and outrage when they were told it actually wasn’t their right to have someone else pay to pump, filter, treat and deliver water so they could shower and water their lawns free. That it wasn’t their right to have others pay for the wastewater to be carried away and treated again before being disposed of so disease and sickness doesn’t spread. That someone else maintaining thousands of miles of water mains and almost 30,000 fire hydrants (which are routinely stolen for their scrap metal content) is not a human right you are born with. That someone else replacing broken water and sewer lines, and laying new lines is not a right you get—not to mention having other people provide electricity, Internet, gas, a roof over your head, public transportation, a phone and other modern amenities—simply by virtue of the fact that you breathe air.

The only people not having their rights protected are the increasingly scarce Detroit upper-middle-class taxpayers who actually pays their taxes.

Detroit’s high-minded mentality caused the city’s collapse. The culture of entitlement and dependency caused its demise. Yes, there were other factors that contributed, like entrenched political corruption, criminal union pay and ridiculous pension packages. There was massive white flight from the city as automakers outsourced production. But what was the cause behind this? As the Big Three car manufacturers struggled with bankruptcy, why did Toyota, Honda, Nissan, Mitsubishi, Subaru, Hyundai, Volkswagen, bmw, Daimler—practically every major vehicle manufacturer—not open a single factory in Detroit or elsewhere in Michigan, instead opting for other states like Kentucky, Alabama, Mississippi, Texas and the South? Why did GM and Ford open plants elsewhere?

In Detroit, the producers left when everyone became a taker.

For decades, the Detroit mentality has been “everyone needs to pay their fair share.” What this really meant was sucking dry the producers and service suppliers, demanding that they subsidize the standard of living everyone took for granted. Detroit took and took and took from them until there wasn’t even any water left. Economic reality disconnected the socialist water spigot.

And yet, even now, with Detroit collapsing, the same “social fairness” policies guaranteed to produce dependency and a culture of entitlement are implemented at the national level as supposed solutions to America’s economic problems.

Detroit may be going through bankruptcy proceedings. Its debt load may be reduced. Its outlandish public servant pensions may be trimmed. Police and fire service will eventually be restored. But unless Detroit mentality is totally changed, unless the people of Detroit completely change their outlook on life and begin practicing a new way of life, the city will be back up the proverbial creek without a paddle.

There is only one way to fix Detroit—and America.

“There are two main ways of life—two basic principles—two fundamental philosophies,” explained Herbert W. Armstrong in a February 1973 Plain Truth article. “One is the way of giving; the other of getting. One is love; the other lust. One believes it is more blessed to give than to receive. The other insists that acquiring, taking, accumulating, in the way of competition, leads to progress and happiness. The one way is God-centered; the other is self-centered. … The one is the way of the divine nature; the other, the way of human nature.”

This world—all civilization, not just Detroit—is based on the hostile, competitive, self-centered way. The way of get, as Mr. Armstrong characterized it. It is the way that is bankrupting cities and nations. Carried to the extreme, it threatens global extinction.

But there is hope for Detroit. Detroit actually has a brilliant future on the horizon! The World Tomorrow—the coming Kingdom of God, which this magazine proclaims—will bring universal prosperity, proper education, universal good health and universal peace to this desperate world. In the wonderful World Tomorrow, people will cease chasing the false values based on the way of get. People will learn the way to real happiness.

Jesus Christ is coming in full power to set up a new government on Earth! He is coming as the King of kings to rule all nations. He is coming to change human nature!

“I see a very bright future—just ahead!” wrote Mr. Armstrong. Jesus Christ “is coming to enforce the way of outgoing concern, or love, of giving, serving, sharing, helping, instead of grasping, taking and self-centeredness. He is coming to abolish war, competition, strife and violence. … He is coming to clean up this filthy Earth. He is coming to restore the government of God as the all-powerful world government.”

Look forward to the day that this whole world will be saved. God speed that day!