A beautiful project in India that illuminates the future 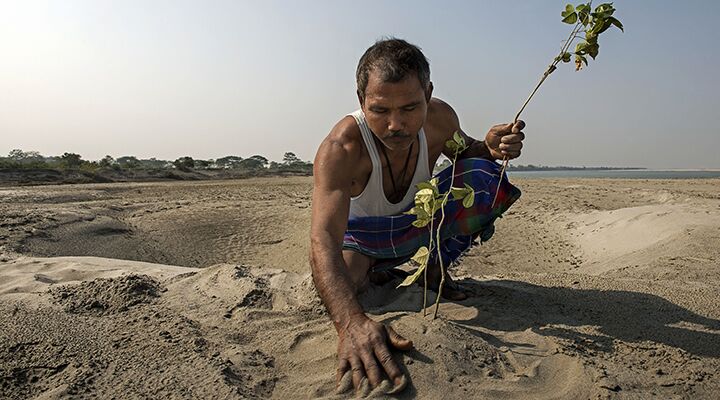 A beautiful project in India that illuminates the future

When Jadav Payeng was 16 years old, he confronted a problem quite unlike those most teenagers devote their attention to. He lived in remote northeast India on Majuli Island, the largest river island in the world. Abnormal monsoon flooding was bombarding the island’s eastern side. It was rapidly eroding the landmass and stripping all vegetation from the remaining land. Jadav looked at the wasteland where lush forest had once stood, and made up his mind to reverse the trend.

So he planted a tree.

That was in 1979, and Jadav has continued planting trees, spreading seeds and nurturing the forest almost every day since then. To date, he has planted more than 100,000 trees on one of Majuli’s islets.

35 years of planting.
Singlehandedly, he has transformed almost 1,400 acres of wasteland into a bustling forest ecosystem. That’s an area almost twice the size of Central Park.

In an e-mail interview with the Trumpet, Jadav said his planting has been successful mainly because it collaborates with the land’s natural healing ability. “The major contributor in making this forest is the nature itself,” he said. “I only catalyze the process.”

During the first few years of his labor, finding enough seeds and saplings was very difficult. Jadav typically had to canoe to the mainland to collect plants, and then carefully transport them back to the islet. But as the years passed, his trees matured. They began providing the seeds and saplings he needed to keep expanding the forest.

Another difficult task is watering plants over such a large area. To accomplish this, Jadav devised a drip irrigation system that is as inexpensive as it is effective. He pokes small holes in clay pots and hangs them above the saplings on bamboo poles. Over a period of days or weeks, the pots empty onto the plants. Jadav refills the pots with river water again and again until the trees grow large enough to obtain the water they need with their roots. “It is not just about planting saplings, but protecting them for the initial years till the sapling becomes self-sufficient,” he said. “Later the nature will take care of itself.”

Jadav said he derives great pleasure from the difficult work: “I am doing my duty with all happiness,” he said. “When I see the young sapling bearing fresh new sets of leaves, all the little pain I might have undergone is disappeared.”

As a result of Jadav’s tireless efforts, his forest is now home to over 100 species of trees and plants. There are arjun and cotton trees, tall elephant grass, mango and banana trees, goldmohur, jamun, jackfruit, and acres of bamboo.

A diverse array of animals has also returned to the region. Deer, Bengal tigers, apes, buffalo, wild boars, monkeys and many kinds of birds, reptiles, amphibians and insects have made Jadav’s forest their home. A herd of more than 100 elephants has also recently started living in the forest for six months of each year. Since the visits began, the elephants have given birth to 10 calves in the forest.

The animal reappearance that delighted Jadav the most was that of the threatened one-horned rhinoceros. “When I saw that even rhinos liked this habitat and visit every year, I feel great and it surely excites me!” he said.

Jadav said the most challenging part of his work has been “working as one man with little resources.” If more people had been working with him over the years, he says they could have “covered the nation” with a restored and healthy environment.

Earlier this year, the Indian government awarded Jadav the Padma Shri, one of the country’s highest civilian honors. India also named the forest that Jadav grew after him, and conferred upon him the title “Forest Man of India.”

1,400 acres of wasteland transformed into forest.
In recent months, he has set his sights on greening another of Majuli Island’s barren islets. “This should keep me busy for another 30 years,” Jadav said.

The most fascinating aspect of Jadav’s labor is that it can serve as a preview for the massive projects that will be undertaken all over the world in the near future. Many of the Bible’s most inspiring passages describe how Earth will look after the return of Jesus Christ. Deserts will blossom with vegetation. Burning sands will become fertile forests. Depleted ecosystems will bustle with plant and animal life. Agricultural abundance will be universal (Isaiah 27:6; 32:15; 35:1, 6-7).

Jadav’s work evokes those prophecies about the Millennium. His projects can help us picture the global restoration that will soon take place. And if his one-man crew has accomplished so much, imagine the amount of land that will be healed, restored and beautified when all men are working together!

To learn how the Bible’s awe-inspiring prophecies will soon become reality, order a fee copy of Herbert Armstrong’s booklet The Wonderful World Tomorrow—What It Will Be Like.