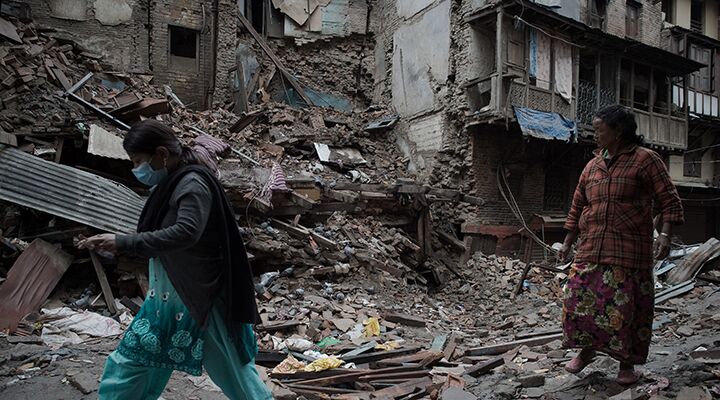 The world began shaking. The furniture, the lights, the plates on the table, the glasses on the shelf—the whole room, the whole building, the whole city. Windows shattered, foundations crumbled, buildings disintegrated. For those who were in Nepal on April 25, the Earth itself might as well have shaken off its axis.

For thousands of Nepalese, April 25, 11:56 a.m., was the end. The last sight of home, the last breath of air, the last heartbeat. By the time the last grim worker trudged through the debris at the last house in the last village and dug out the last corpse, the mountain of recorded fatalities exceeded 8,000 lives. About 19,000 more were injured, lacerated by flying glass, struck by plummeting concrete, half-crushed by collapsing walls.

All because there are two tectonic plates 9 miles down and about 50 miles northwest of Kathmandu—and on April 25, they shifted a bit.

“Me and my mom were at terrace washing clothes, and suddenly the house started shaking,” Manisha Dahal told the Trumpet from Kathmandu two days later. “We could not run as it was shaking tremendously. We sat on the terrace hugging each other. After few seconds, we saw a building fall down right in front of us. Then we saw a cloud of dust in the sky. We then saw a few building collapse at a distance.

“My vision became blur, and I thought we would not survive. … Birds and dust filled up the sky, and we could see other houses swing. Then, after a while the shaking stopped, and we went downstairs on the open road. As soon as we were on the road, we felt the second quake. Everybody were holding each other and praying for it to be over. …

“Till now, I have experienced 28 shakes, and we are terrified to go inside. We spent the night in the open grassland, which was OK, despite of cold. Then, in the middle of night, it rained. We tried to go inside thinking the shaking would not be repeated; there was a shock again.”

Manisha and those around her would have to endure more than 100 terrifying aftershocks. They would have to grieve for thousands of their fathers, their grandmothers, their infant sons, lost to a 7.8-magnitude monster. Tens of thousands like her would huddle in makeshift shelters, shell-shocked, petrified, at risk of disease, and unable to return to their pulverized neighborhoods.

These people died for a reason. That cost is too high for us to shrug this off. We need to face this thing.
Then, when the shocks had finally died down and the Nepalese were sifting through the pieces—it happened again. A magnitude 7.3 and a 6.3 hit on May 12. Eighty-three more people perished, and 2,000 were hurt.

Why did this happen? Why are husbands now without wives, mothers without daughters, grandfathers without grandsons? Why did they die?

Because a piece of Earth clicked? Is that it?

News about the quake was everywhere. Facts and statistics, updated hourly, beamed around the world. But did you hear any adequate—any true—answer to the most important, basic and burning question: Why did these people die?

No. This earthquake meant something. These people died for a reason. That cost is too high for us to shrug this off. We need to face this thing.

Let’s start here: Each of us is roughly a 17-billionth of a cubic mile big. We live on a 260-billion-cubic-mile particle named Earth. Earth has a hot core, a semisolid rock mantle and a thin crust. The crust consists of slim plates with tiny folds and grooves on its surface. On the surface, in some places, if you get really, really close, you can see a delicate dusting of man-made structures. And inside those structures are minuscule human beings.

What happens if there’s a tiny twitch in the crust? Or if the gaseous layer above it swirls a bit? Or if part of it gets damp? Thousands of those particulates called humans perish.

We continue only because we have been given a place among the stars under a warm sun, because a vast network of tailor-made natural systems work together to nurture us fragile little beings. This existence came from somewhere. This compassionate design came from someone.

Because creation came from a Creator, it follows that environmental disasters have a spiritual dimension. Thankfully, the someone who created our planet and created us reveals Himself to human beings. He is God.

But a God who lovingly made creation would never allow humans to suffer. That is a false argument, based not on God’s actual nature, but on our own ideas.

So God uses something no human being can control to communicate with us: our environment. We just need to get the message: If your entire world is shaking, something is wrong.

When earthquakes, tsunamis, hurricanes, mudslides, tornadoes and fires strike, does that mean God is lashing out at us in retaliation? No. It is God’s loving correction for those who will recognize it. Does it mean that those who die as buildings collapse on them are extra-sinful people? Jesus Christ Himself answered this exact question. He said that victims in such disasters are a warning to the rest of us that unless we repent, we will likewise perish (Luke 13:4-5).

Jesus also taught this decisive revelation: Death is temporary. Christ is the resurrection, and He says that those who died when He was on Earth under the Tower of Siloam and in our day in Nepal will eventually be resurrected. Then they will have the opportunity to be shaken from a sinful way of life, to be jolted out of a wicked and doomed existence.

The same opportunity that we have, right now.