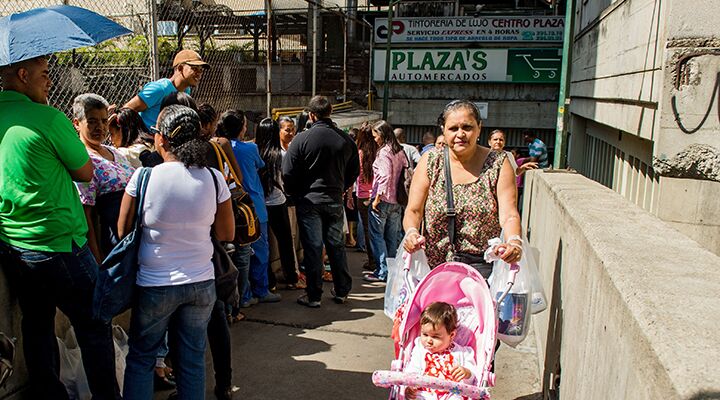 Venezuela has the world’s largest oil reserves, yet this socialist utopia is on the verge of economic collapse and possibly revolution. It stands as a stark warning of how addictive socialism is—and how destructive.

Some people blame Venezuela’s pending collapse on falling oil prices, but this was brewing when oil was at $100 per barrel. Venezuela is an example of what happens when governments embrace wealth redistribution in an attempt to buy votes. They call it promoting “fairness” and “sharing the burden.” It is the Achilles’ heel of democracy. Once people figure out they can vote themselves benefits out of the public treasury, a vicious spiral occurs with politicians promising ever-greater benefits and voters demanding increasingly more gifts. Venezuela is the result.

The Telegraph’s Peter Foster does a good job describing the situation. Take a look (emphasis added throughout):

[Late Venezuelan President Hugo Chávez] promised the people the riches of the revolution, and for a while he was able to deliver, thanks to his country being blessed with the world’s largest proven oil reserves.But now, as the people queue at the pharmacy and the supermarket for basic necessities like baby formula, flour, milk and toilet paper, the promises sound like empty boasts.Even the middle classes, previously insulated from many of the country’s gathering economic woes, are feeling the pinch ….In a shopping center in the Sabana Grande district last week, women queued outside a pharmacy for nearly two hours to buy two four-roll packs of toilet paper. In what has become the ultimate indignity for the Venezuelan public—and a huge embarrassment for the regime—shortages of toilet paper mean it is now strictly rationed.In public, the shoppers are stoical, wary of speaking ill of a regime that has a track record of taking revenge on its critics, excluding them from the handouts and government jobs that became the hallmark of Chavez’s rule.But in private, the anger is intense. “In Venezuela, the country with the world’s largest oil reserves, you have to queue for the right to wipe your backside,” said a queuing taxi driver, who declined to give his name.For Nicolas Maduro, the president, a former bus driver who Chavez designated as his successor and who won a disputed election in 2013, the response to the crisis has been a mixture of denial, wishful thinking and angry denunciations of international capitalism waging an “economic war” on Venezuela. …

Notice the incompetency of a socialist government more interested in waging war on capitalism than the real-life consequences of its policies (ibid):

But with real inflation now running at nearly 100 percent, according to Robert Bottome of the VenEconomia think tank, and with Venezuela’s oil revenues being squeezed further by international oil prices, the measures were equivalent to trying to open an umbrella in a hurricane.Sharply lower oil prices caught Venezuela off guard, with “no rainy day fund, no contingency plans,” wrote Mr. Bottome in his latest weekly report on the economy. “In short Venezuela is in the midst of a crisis unlike anything in its history.”The country is almost completely reliant on oil sales to pay for imports of goods that it no longer manufactures after decades of living as a petro-state. With Venezuelan oil prices dipping below $40 a barrel this week, those revenues are shrinking fast.

Why does Venezuela no longer manufacture things? The same reason store shelves are empty. It’s because of inane socialist policies including government-mandated prices that companies are “allowed” to sell their products for. This is part of the socialist dogma of making sure capitalist manufacturers are not “exploiting” their customers. Another reason is that the government has nationalized local and foreign manufacturers who refused to sell products at a loss. The government-run businesses then ran them for a loss, adding pressure to state finances.

Over time, ever-greater portions of Venezuela’s economy became government run. And run with losses. High oil revenue made up for the loss for a while, but the government increasingly turned to money printing to make up the difference between its revenue and the promises politicians made. Money printing led to massive inflation and the destruction of the value of the bolívar. Now that oil prices are falling, it appears like the socialist mecca may be about to collapse. Here is another example of socialism gone extreme (ibid):

In the streets of Caracas, there is a superficial normality. Cars still clog the roads, as it costs only 3.5 bolívares—roughly [56 cents]—to fill a saloon car with petrol—and many of the shops appear well stocked.

No wonder Venezuela is broke. The government is selling gasoline for 56 cents to fill a car. Not 56 cents per gallon—per car. But if the government allowed prices to rise to the cost of gasoline production, many people who have become reliant on government subsidies would be up in arms. Foster continues:

But look more closely and the “Potemkin village” aspects of Venezuela’s economy become clear. McDonald’s has no potato fries to serve because the company’s supplier cannot find the money to import real potatoes, so instead it serves a cardboard tasting substitute made from yuca.In a branch of the Farmatodo pharmacy, one entire wall is stocked just with toothpaste and mouthwash and another with bottles of Pepsi, following a government directive ordering stores to fill the shelves with anything to give the appearance of plenty. Curiously, for all the toothpaste on display, there are no toothbrushes.

Another silly government mandate. Order merchants to fill shelves. If only it were so easy. Just pass another law and outlaw the effects of bad government policy. What happens when the mouthwash runs out? Will the government order businesses to fill shelves with rocks? Will it mandate that McDonald’s only sell potato fries even though it can’t buy potatoes because nobody will take bolívares? This is what eventually happens in command economies. Socialism eventually degrades into the government becoming increasingly intrusive into people’s lives and in the economy of the nation. Until it collapses. Look at the government-run medical industry. As Foster points out:

For families like that of Carmen Perez, and 13 other Venezuelans who doctors at the Caracas University Hospital say have died as a direct result of medical shortages, the crisis is no longer about inconvenience, but the worth of a human life.In another consulting room, we listened as the father of a boy with leukemia was told that the hospital had only three of the five chemotherapy drugs his son needed, and that one of those was a substitute that would cause horrible side effects. As a young doctor pointed out though, the boy was lucky to be getting anything at all.Such is the speed of Venezuela’s downward slide that policy analysts, Western diplomats, economists and opposition activists interviewed by the Telegraph this week all admitted that no one knows where, or when, it will end.At the hospital they know only that if things don’t improve fast, more lives will be lost.”There are 600 to 700 people on the cardiac waiting list,” said a doctor, who detailed shortages of everything from gauze to sample tubes. “If they don’t receive the surgeries they need, more of them will die.”

As Foreign Policy describes, even as Venezuela has spiraled into hyperinflation and economic collapse, Venezuela’s leaders kept building massive state-financed mega projects—monuments to their greatness. They include a 50,000-seat soccer stadium and a 35,000-seat baseball park. As the Foreign Policy article pointed out:

[President Nicolas Maduro’s] big bet: A new sports park will take his countrymen’s minds off their sputtering economy. Venezuelans may not have hand soap, milk or deodorant right now. But they’ll have their sports. …And if similar projects around the world are any indication, the full cost of the stadiums could blow past initial estimates and run upwards of $1 billion, with the full price tag of the park, stadiums and transportation hub coming in even higher. Not that there’s much oversight: Funding for the project comes from opaque development funds that bypass congressional approval, potentially opening it up to the graft and corruption so pervasive in Venezuela. …Nagging shortages of basic foodstuffs remain a persistent problem. Even in places like Caracas, the sudden delivery of staple goods like sugar, coffee or corn meal can quickly lead to huge lines. And because of a steel and cement deficit, the government has cut back on public housing and infrastructure projects. Meanwhile, the country’s currency, the bolívar, has lost most of its value. Although the official exchange rate is 6.3 bolívares to the dollar, the black market rate is now 182. Analysts also estimate that inflation will rise to over 60 percent by the end of the year. And with oil prices dropping precipitously, the prognosis for the future is bleak: Many experts predict that inflation could hit triple digits next year as the recession deepens. …Indeed, before his death, Chávez inaugurated a number of megaprojects to showcase the success of his revolution, often taking credit even for those started by his predecessors. Finishing them has proven more difficult. According to Venezuela’s national comptroller’s 2013 annual report, 4,381 public infrastructure projects remained incomplete as of Dec. 31, 2013. A quarter of them began before 2006 and have languished due to a lack of funding, political will, corruption or poor execution.

Here is the ultimate result (ibid):

Roberto Montoya, a 37-year-old teacher in Caracas, and others fear that [the athletic coliseums will never be finished], especially as Venezuela’s economic crisis mounts. “I’m hoping that they will be able to finish it, especially the sports venues,'’ he says. “But right now I’m too busy trying to find some groceries to worry about it.”

Before you breathe a sigh of relief that you do not live in Venezuela, take a look at the latest issue of the Philadelphia Trumpet. Here is a sampling of some of the articles: