Why the counterintuitive choice is the right one 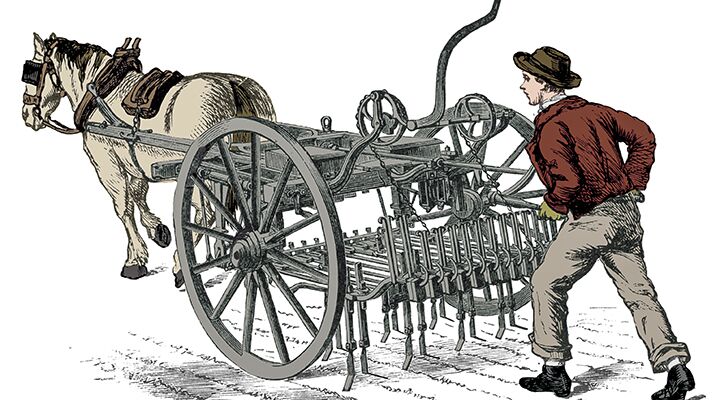 Why the counterintuitive choice is the right one

America, 1860s. On his family’s farm in upstate New York, 9-year-old Almanzo Wilder grows up—working. He embraces considerable responsibility, and he yearns for more. Then the boy receives an offer of apprenticeship from the owner of the wagon shop in town.

Almanzo’s father explains to him the benefits of the shop job versus farming: an easier life, shelter from the weather, fewer worries, plenty to eat, money in the bank. “But there’s the other side, too, Almanzo,” James Wilder says. “You’d have to depend on other folks, son, in town. Everything you got, you’d get from other folks. A farmer depends on himself, and the land and the weather. If you’re a farmer, you raise what you eat, you raise what you wear, and you keep warm with wood out of your own timber. You work hard, but you work as you please, and no man can tell you to go or come. You’ll be free and independent, son, on a farm.”

That comes from Laura Ingalls Wilder’s biographical book Farmer Boy. I got somewhat emotional reading it to my children the other day. Partly because of the touching interchange between a manly father and his son. And partly because of how foreign, how remote from life today.

There was a time in “the land of the free” when this was freedom. Being free to work, to provide for your family, free from dependence on others. Today, “freedom” has come to mean nearly the opposite. People seek freedom from responsibility. Freedom from consequences for inaction and failure. Freedom from having to work, provide, contribute, give or serve. The country that ascended the mountain to greatness has been transformed from rugged, moral and hard-working into soft and decadent. A 9-year-old is way ahead if he is responsible enough to make his own bed.

And the wagon shop apprentice is a self-sustaining stalwart compared to our extreme dependency. Folks in town who make things people need are the least dependent among us; they’re generating wealth in the private sector. Beside them America has millions of people on federal, state and local government payrolls, comprising the biggest sector of the national economy. Additional millions are even more dependent, living on handouts from myriad government social programs, welfare, continuous unemployment benefits, nationalized retirement funds and health-care entitlements. Even our once free and independent farmers live off federal subsidies.

In Britain the millstone of socialist entitlements is even heavier. And evidence shows these programs create as many problems as they purport to solve. Misguided welfare policies reward single mothers more than intact families. And since they subsidize it, they get more of it: Britain’s welfare system has patently created a surge in broken homes. Britain pays 2.6 million people for being sick and incapable; over half a million of them are thought to be able to work, but unwilling. A hundred thousand on sick benefit are between ages 16 and 24. Three fourths of these youngsters are suspected of faking their sicknesses. And 20 percent of them have been receiving this money for at least five years. Unsurprisingly, the nation is also suffering an exploding epidemic of 16-to-24-year-olds who aren’t going to school and aren’t working—and a simultaneous epidemic of youth antisocial and even criminal behavior. If he could have paused from his labor and peered into this future, Almanzo Wilder would have been incredulous.

Government tends to create dependents in order to justify and amplify its own existence. It promises the kind of freedoms Anglo-Americans have come to crave—freedom from responsibility, from work, from consequences. But the more we depend on government, the more we surrender our actual freedom—and compromise our character, and shrink within the confines of childhood in the shadow of the nanny state. This is one reason we have legions of grown men less capable, trustworthy and productive than the 9-year-old farmer boys of yesteryear.

Behold this regrettable manifestation of a pack of lies we promote and believe today: that honest work is a curse and idleness a blessing; that happiness comes from materialism; that luxuries are a birthright; that redistributing wealth is only fair; that it is more blessed to receive than to give. Now, one in five Americans say the most practical way to amass wealth and the best hope of financial security is to win the lottery. Among those who make less than $25,000 per year, it’s two in five. Not to work hard, or save, or invest soundly, or contribute a useful product or service to the free market—but to flush money down a whirlpool of impossiblility and cross your fingers.

Nonsense. Don’t believe the propaganda that life gets better only when it gets easier. Return to the Bible-based wisdom that helped build our nations. Give honest labor for honest wages. Turn down unnecessary handouts; shun get-rich-quick schemes (Proverbs 28:19-20, 22). Curb materialistic covetousness; live within your means. Apply yourself, be diligent and industrious (Proverbs 10:4). Commit to principled business conduct: fair transactions that benefit both buyer and seller. Take responsibility for your own (1 Timothy 5:8). Make God your partner, obey His laws, and give Him His tithe (Psalm 1:1-3; Malachi 3:10).

This is the most practical way to build wealth, the best hope of financial security. Follow this wisdom, and you’ll enjoy a considerable measure of actual freedom. And God promises in Joshua 1:8, “then thou shalt make thy way prosperous, and then thou shalt have good success.”