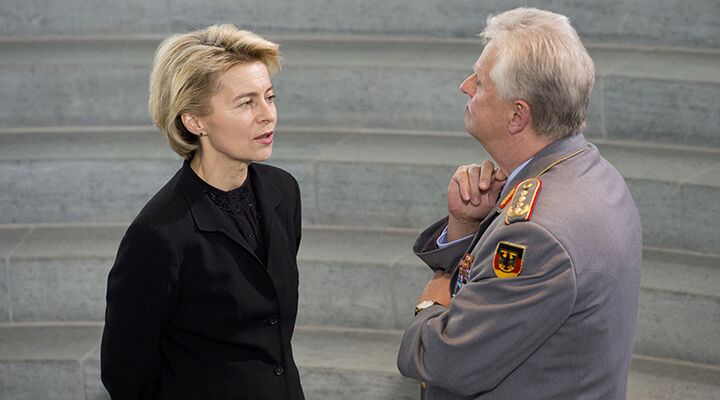 Such an army would fulfill Bible prophecy

Germany wants to be the “driving force in Europe of a parliamentary controlled European army,” German-Foreign-Policy.com reported December 8. It cited a position paper produced by military experts in the Bundestag. These experts want a European Union military academy and a permanent military headquarters.

But is having Germany in the driver’s seat of a European army cause for concern?

Rainer Arnold, the Social Democratic Party’s (spd) defense policy spokesman, presented the paper to the Bundestag. The authors in the paper recognize Germany as an international power house economically, but decry its laughable foreign and military policies. These policies, Arnold said, are “urgently in need of improvement.”

The signs are there for all to see: This will be an EU army under strong German control.
These spd demands come as Germany is independently building bilateral and multilateral projects with other European nations, particularly their militaries. Brigades from national armies are joining with the Bundeswehr and coming under the command of the German Army. “Never before has a state renounced this elementary and integral part of its sovereignty,” wrote Die Welt’s political editor, Thorsten Jungholt. Dutch brigades joined the German Army on June 12.

On October 29, German Defense Minister Ursula von der Leyen signed a declaration of intent on German-Polish cooperation with Polish Defense Minister Tomasz Siemoniak. This declaration of intent is not limited to training drills but provides for “placing combat battalions under the other’s command.” After the agreement, von der Leyen’s ministry declared the “German-Polish cooperation is a trendsetting milestone for the development of European integrated military structures.”

Hans-Peter Bartels, the chairman of the German parliament’s defense committee, left no doubt as to the final destination of all these additions. “The hour has come, finally, for concrete steps towards a European army,” Bartels told Die Welt.

The signs are there for all to see: This will be an EU army under strong German control.

[T]he EU will need to assume more responsibility around the world.
Deputy Director of swp Claudia Major
Apart from integrating other nations’ armies into theirs, the Germans also want to consolidate the defense industry. The German minister of the economy requested an EU armament industry based primarily in Germany—but the main requirement is that the armament industry be independent of the United States.

The government-affiliated German Institute for International and Security Affairs (swp) believes that America’s changing global role is a good reason for establishing an EU army. Claudia Major, deputy director of swp’s “Security Policy Research Group,” wrote that the recent years have shown that national sovereignty is illusory. In a globalized world, major developments, like the financial crisis, do not stop at state borders and the only way to counteract the risks is through cooperation. Because of America’s shift to Asia and Africa and a 2011 rebuking of its European allies to serve more in world affairs, “the EU will need to assume more responsibility around the world.”

German Vice President of the European Parliament Alexander Graf Lambsdorff expressed, “Only a European approach” to military issues can keep the “economic giant” that is Germany from remaining “a political dwarf, when it involves seriously defending western values and interests.” German political leaders see the establishment of an EU army as Germany’s means of exerting influence on the world.

The spd—in conjunction with Germany’s ruling parties—“want to be the driving force in Europe of a parliamentary controlled European army,” and it is “pursuing this objective relentlessly,” reported German-Foreign-Policy.com. Already we see the nucleus of a European army emerging with the German Bundeswehr agreements with Poland and the Netherlands. The German press stated the Bundeswehr is the “trailblazer for a European army.”

Germany’s dream of a European super-army controlled from Berlin, and independent of America—is now becoming reality—and should startle Western policymakers. The last time Germany attempted to exert its influence upon the world, it did not go well. The Bible shows what will happen next.

Key of David presenter Gerald Flurry recently spoke about a coming European power on his “Revelation 17:10” program. To see where Germany’s aspirations for an EU army are leading, read “Under Construction.”