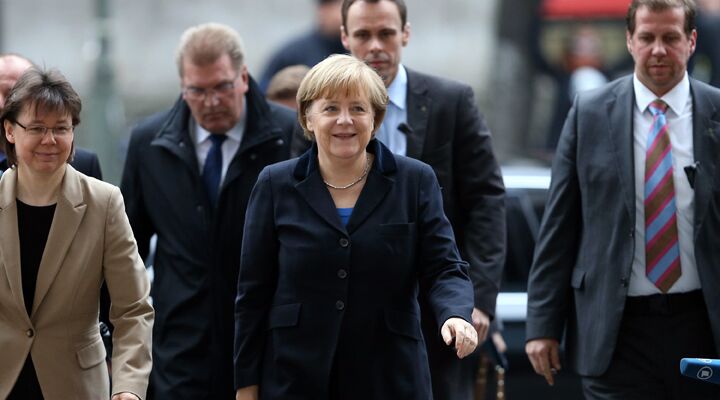 Germany lays out its ambitions for the next four years, including a plan to ‘strive for an ever closer associate of European forces, which can evolve into a parliamentary European army.’

Germany wants to create a new European army, according to one of the latest documents to come out of its coalition agreement. The coalition paper on foreign affairs and defense, published November 19 and approved by the coalition panel led by German Chancellor Angela Merkel, calls for Germany to face “up to its international responsibilities” and “stand ready if contributions to the resolution of crises and conflicts are expected.”

The paper explains that in order to “be prepared for the mission of the future,” the EU must work together. Wherever “useful and possible” there should be “a sharing of national military capabilities in the EU … as well as … a greater division of labor,” the report said—adding that the same thing applies to nato.

But its most striking statement was: “We strive for an ever closer association of European forces, which can evolve into a parliament-controlled European army.”

This is the clearest statement yet released of Germany’s intentions. The Trumpet has warned that this is Germany’s goal—by reading between the lines in other reports—but now the German coalition seeks to commit to this as its official government policy for the next four years.

It’s official: When Germany works together with one or two other armies, it does so with the goal of “evolving” a European army.

A clause in the Lisbon Treaty—formerly known as the European Constitution—allows a smaller group of European nations to work more closely together on military and defense. The coalition paper suggests enacting this.

Europe’s military would be divided into clusters. Individual nations would no longer have to maintain a balanced military. They would be free to specialize, but overall, each cluster would have all the necessary defense resources.

Each cluster would be built around a “framework nation”—one of Europe’s larger militaries. These framework nations would lead a cluster, providing a broad and balanced military as a foundation for other nations to build on. In the paper, Germany volunteered to be one of these nations.

All of this, the report said, “opens up great opportunities for more efficient use of limited resources for European security policy and could also provide opportunities for conventional disarmament in Europe.”

The coalition document’s stance on nuclear disarmament is also interesting. Germany’s last coalition document—between Merkel’s Christian Democratic Union (cdu), its sister party the Christian Social Union (csu) and the Free Democrats (fdp)—explicitly committed the German government to work toward the removal of all U.S. nuclear warheads in Germany. These bombs are owned by America, but controlled by Germany.

This commitment has been watered down. Despite the fact that the new coalition is with the much more pro-disarmament Social Democrats (spd), the government is no longer committed to the removal of the weapons. Instead, it is conditional on nuclear disarmament talks between the U.S. and Russia. If the talks are successful, it will “provide the basis for a withdrawal in tactical nuclear weapons stationed in Germany and Europe.” Completely ignoring the promise to remove the weapons in the last coalition agreement, Mrs. Merkel has left herself plenty of wiggle room. Has she decided to keep them?

The bulk of the paper, however, is not about military matters. Instead, it emphasizes “the means of diplomacy, peaceful conflict resolution and development cooperation” are the priority. Germany is only just getting used to being a soft power. It doesn’t want to put too much emphasis on the military.

One of the other priorities the coalition set was engaging with “countries on the southern and eastern shores of the Mediterranean.” These countries, the paper said, “are of strategic importance for Europe.”

“A closer integration of these countries in the EU can contribute to the stabilization of the region,” the paper said. Trumpet editor in chief Gerald Flurry has repeatedly warned to watch for greater German involvement in this region, most recently in the July print edition.

The paper also indicated that German relations with Russia could improve during the next government. Being more liberal, some might expect the spd to take a more confrontational approach to Russian President Vladimir Putin’s authoritarian regime. However, Gerhard Schröder, former German chancellor and spd leader, is close friends with Putin and even went to work for Russia’s Gazprom after he retired from the chancellorship.

So although the paper puts in the obligatory condemnation of Russia’s human right record, its emphasis is on a close working relationship. The new coalition wants “open dialogue and broader cooperation with Russia.” Germany also plans to “work with the European Union for coherence in policy towards Russia” and wants “a strengthening of cooperation in foreign and security policy ….”

“Security in and for Europe can only be achieved with and not against Russia,” concludes the section. “We want to work together with Russia to bring the settlement to the conflicts in the common neighborhood ….”

Germany also renewed its commitment to protecting Israel. The coalition parties “note with great concern that the situation of Christians and other religious and ethnic minorities in North Africa, and the Near or Middle East, [have] developed for the worse.” Christians “need to have a future in this region,” it states.

This paper, of course, represents words not actions. Calling for a European army is a long way from making one. But it does show what Germany’s leaders believe is important for the future. This increased focus on a European army—to the point of making it a key part of the coalition’s foreign policy—is big news by itself. Europe’s movement toward a common army has been sluggish, to say the least. But now it is officially one of the top priorities of the next-probable German government.

For more information on this push for a European army, see our recent article “Under Construction.”