What do you think would make you happier in the long term: winning the lottery—or permanently losing use of your legs in an accident? The answer may surprise you. 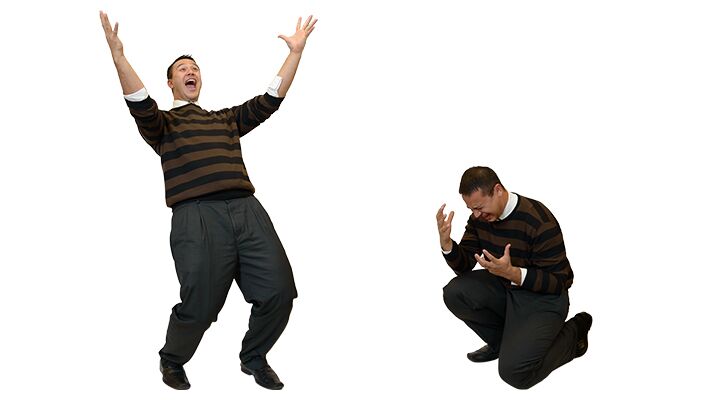 What do you think would make you happier in the long term: winning the lottery—or permanently losing use of your legs in an accident? The answer may surprise you.

Many years ago, a young sultan ruled over a tract of territory along the shores of the Red Sea. Each time a burst of prosperity came his way, the sultan’s spirits soared to the loftiest altitudes of pride and self-importance. But during times of adversity, he always fell to the depths of discouragement. His temper never knew a medium.

The sultan was frustrated by complications that entered into his life as a result of the wide swings in his temperament, but he wasn’t sure how to pinpoint the problem, much less remedy it.

One day, news came to this sultan of a ruler in a nearby kingdom who was said to have boundless wisdom: Solomon, king of Judah.

Accounts of Solomon’s bewildering wisdom made the sultan eager to seek his counsel. He traveled to Jerusalem and was granted an audience with the king. He explained his erratic nature and provided Solomon with examples of the oscillations in his mood.

“Return to me in one month’s time. I’ll be able to help you then.”

The sultan went back to his palace, feeling elated, proud and immortal. After the prescribed duration had passed, he returned to Jerusalem and entered Solomon’s court. The king handed him a small box and told him to open it. Inside was a ring with this Hebrew phrase etched onto its surface: Gam zeh ya’avor.

This too shall pass.

“This proverb will serve as a constant reminder that all material conditions, positive or negative, are temporary,” Solomon said. “Wear it, remember it, and live by it.”

Some have attributed the well-known proverb, not to Solomon, but to medieval Persian Sufi poets, early Turkish writers or others. The account of King Solomon and the sultan isn’t recorded in the Holy Bible, but only passed down by Jewish oral tradition, so it isn’t possible to dogmatically say the Jewish king was its author. However, in his book This Too Shall Pass, Avi Solomon points to discoveries of ancient rings and amulets bearing the Hebrew version of the phrase as substantiation of the Jewish claims. Still, some versions of the Jewish account depict Solomon not as authoring the proverb, but as receiving it from another.

How much it expresses! How chastening in the hour of pride! How consoling in the depths of affliction.
Abraham Lincoln, on the phrase ‘This too shall pass’
Regardless of the phrase’s origins, its wisdom and value are beyond debate.

It is not just applicable to the wildly intemperate sultan in the account, but to every person alive. Abraham Lincoln once praised the succinct brilliance of the proverb, saying, “How much it expresses! How chastening in the hour of pride! How consoling in the depths of affliction.”

Consolation in the Depths of Affliction

When a person is in the middle of a trial, there is a tendency to think it will last indefinitely. We have a nearly impossible time occupying a certain moment—especially an emotionally difficult moment—and imagining a future in which we feel differently than we do at that moment. Yet, every one of us can reflect back on trials that seemed hopelessly dark at one point, but eventually mellowed, softened and brightened up. Time goes on, winter gives way to spring, and as King Solomon definitely said, “the sun also rises” (Ecclesiastes 1:5; American King James translation).

If we can remember that adversity will pass, we can weather life’s storms in a way that speeds and facilitates our growth.

But what about profoundly traumatizing events? Does the sun also rise on these? Will the “this” pass even when it involves soul-grinding suffering?

In his book Stumbling on Happiness, Daniel Gilbert says that even in the most extreme trials we generally bounce back. “[R]ather than being the fragile flowers that a century of psychologists have made us out to be, most people are surprisingly resilient in the face of trauma,” he wrote.

Gilbert cites studies that tracked people who had suffered the loss of loved ones or had been paralyzed from the waist down in accidents. The researchers discovered that after just one year passes, almost all people—whether they had permanently lost use of their legs or a loved one—return to their baseline pre-loss levels of happiness. “Although more than half the people in the United States will experience a trauma such as rape, physical assault or natural disaster in their lifetimes, only a small fraction will ever develop any post-traumatic pathology,” he wrote.

This doesn’t mean the suffering from all traumas and tribulations always completely dissipates. The scarring from some experiences is deep and may leave us with long-term vulnerabilities. But in most cases, we are tougher than we think, and we have some say in how long we remain injured, and to what degree.

In the first century, some members of the Church in Corinth believed their trials were abnormally difficult, and were more than they could stand. The Apostle Paul wrote to them, “There hath no temptation taken you but such as is common to man: but God is faithful, who will not suffer [allow] you to be tempted above that ye are able; but will with the temptation also make a way to escape, that ye may be able to bear it” (1 Corinthians 10:13).

Man has an astonishing capacity for resiliency! In the thick of a trial, we often feel like it’s more than we can bear. But relying on God for help means we can bear and escape it, and build godly character in the process. When suffering comes, we should strive to learn from it. When the time is right, we should let it pass like water flowing over a rock.

Caution: Conquests, Too, Will Pass

As tough as it can be to remember during the throes of hardship that it will pass, it’s often even harder to keep in mind that times of abundance are subject to change.

We can be joyous when we are granted a victory. But we should remain grounded in gratitude toward God, and wary of riding an emotional high.

One of the studies that Dr. Gilbert cited in his book tracked happiness levels of people who won the lottery. Unsurprisingly, there’s a big surge in the levels of happiness that the winners report in the months just after the fortune befalls them. But the elation is short-lived. In fact, after one year passes, the data shows that the lottery winners and the paralyzed people were equally happy with their lives.

Remaining mindful of the impermanence of prosperous physical circumstances doesn’t mean we should limit our exposure to life like some kind of monk or stoic. We can drink deeply from the wells of life, but must remember that times of prosperity are not guaranteed to last.
People often allow times of prosperity to inflate their egos and fill them with hubris. This stifles growth, and may compel a person to take credit they don’t deserve, to burn interpersonal bridges, or to take the prosperity for granted.

Remaining mindful of the impermanence of prosperous physical circumstances doesn’t mean we should limit our exposure to life like some kind of monk or stoic. We can drink deeply from the wells of life, but must remember that times of prosperity are not guaranteed to last. That will help us avoid vanity, arrogance and extravagance—and the suffering that comes with them.

This Shall NOT Pass

King Solomon said that when a person’s life ends, he “shall take nothing of his labour, which he may carry away in his hand” (Ecclesiastes 5:15). You might make arrangements for all of the shiny material things you’ve collected to be crammed into your coffin when you die, but it won’t matter. Only one thing will remain after this life ends.

“[T]he spirit shall return unto God who gave it” (Ecclesiastes 12:7). This verse describes the spirit in man, which is the depository of a person’s memory and character. (You can learn more about this spirit from our free booklet What Science Can’t Discover About the Human Mind.) When someone dies, this spirit returns to God, who keeps it “on file” until the time of judgment described in Revelation 20:12-15 and other passages.

The only thing that remains after death is the character a person built during life.

How is that character built? In the way the person responds to all experiences, both high and low, in this life.

If a person built righteous character with God’s help, it will never pass.

Life is experience. It is rife with victories and disappointments, prosperity and trials. We can allow them to shove us all over the emotional spectrum, letting prosperity rush us into extravagance, and allowing adversity to hurry us into grief. Or we can view our experiences with a wider view, remembering that this physical life is so fleeting, and that the only thing that will never pass is godly character. With this truth firmly in mind, we can learn to temper our reactions. We can learn to speed our development of temperance and other traits of godly character. We can learn that this too shall pass.