The Fed threw the world’s biggest party—and it’s about to turn into a massive brawl. 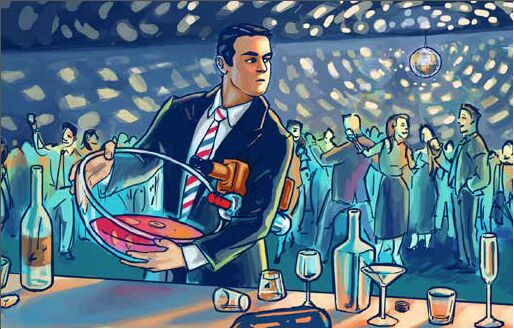 The Fed threw the world’s biggest party—and it’s about to turn into a massive brawl.

On October 28, the Federal Reserve announced it was time to end the free-money party. With stock and bond markets jump-jiving to all-time highs and the economy supposedly gyrating in robust recovery, the Fed started walking off with the punch bowl. But was this party a good idea to begin with? The free-money merrymaking has set up the economy for a massive hangover—and perhaps economic convulsions.

“The final word on quantitative easing will have to wait for historians,” Ambrose Evans-Pritchard wrote in the Telegraph on October 29. “[T]he experiment was a huge success … [but] that quantitative easing contaminated the rest of the world in complicated ways and may have stored up a greater crisis for the future.”

The Fed’s decision to print money like confetti is seen by many as a success. For example: In 2008, the global system was sitting on a financial time bomb. Sources told the New York Post it was “500 trades away from Armageddon.” The Fed concocted $105 billion out of thin air that day to pour into the system and keep everyone from going berserk.

So Wall Street still exists—that’s one celebratory blow of a party horn for quantitative easing. And official unemployment is another toot on a kazoo: It’s back down to 5.9 percent.

But the cover charge was the steepest stimulus package in U.S. history. Adjusted for inflation, it’s almost as much as the nation spent fighting World War ii.

The Fed printed $3.5 trillion worth of funny money to keep banking liquidity sloshing around the punch bowl and the big banks quick-stepping to the music. That is money that must be repaid—and with interest. But was it money well spent?

Well, for that much cash the government could have skipped bailing out the banks and instead purchased every single publicly traded bank in America: Goldman Sachs, JPMorgan Chase, Citigroup, Bank of America, BancFirst, Wells Fargo, SunTrust, bb&t, American Express—and dozens more. Then it could have spent the hundreds of billions left over on the world’s biggest block party.

Pouring that fiat money into the party dulled the immediate economic headache. Each additional drink kept the revelers happy a little longer and preoccupied them from yelling insults at the host at the top of their lungs. But it did nothing to make them feel better the morning after. In fact, it made it worse.

And when it comes time to cut them off, better call a bouncer.

However, the Fed went ahead and spiked the punch bowl with about a keg of quantitative easing. That move is credited with fueling today’s animal spirits. But it is increasingly evident that it didn’t fundamentally fix anything. At best it put off the day of reckoning. At worst it may have set up the economy for an acidic big heave—or an intoxication-induced coma.

During the last major financial crisis centering around the end of 2008, one of the worst outcomes was the number of jobs lost. Between 2007 and 2009, the economy lost 8.7 million jobs. It took until June 2014, more than five years, for the economy to finally gain back the jobs it lost. It was the slowest recovery since the Great Depression. Even today, after adjusting for population growth, America is still missing more than 6 million jobs.

And the jobs that came back were not as good as the ones lost. High-paying manufacturing and banking jobs have been replaced by low-paying positions in restaurants, hotels and temp agencies, which now account for a higher proportion of the total workforce.

While the government went wild spending stimulus money, taxpayers became less and less able to pay it back. According to the latest Census Bureau report, median household income has fallen to $51,939—about to where it was in 1989. That’s even less than the $55,489 the median family earned in 2009, during the depths of the economic crisis.

No wonder public-opinion polling shows that the typical American still thinks the economy is pretty miserable. It’s because it is.

True, unlike the 1930s, we don’t see food lines stretching from block to block. Instead, people get their handouts from the government more conveniently. Today, 46 million Americans are on food stamps—one in five households. In some cities, it’s one in three people. By the end of 2013, almost 50 percent of the population received at least one form of government assistance. America’s vaunted free-market economy isn’t so free any more—or so vaunted.

Maybe we blew the kazoo too fast.

So if Main Street wasn’t enjoying the celebration, who was? Surely somebody was having the bash of a lifetime with the government’s $3.5 trillion.

As it turns out, all those Fed dollars did light up a party—and a big one. You just weren’t invited.

Since the 2009 economic crash, and the onset of Fed money printing, markets have been on a tear. The Dow Jones tap-danced from under 10,000 to a record high of 17,390 at the end of October. Bond market investors are lip-syncing “Happy Days.” The Federal Reserve’s easy-money policy pushed interest rates to historical lows and bond prices to record highs. In many big coastal cities, even McMansion prices are setting new highs again.

Unfortunately, for most people the soaring markets don’t mean much. Eighty percent of financial assets, things like stocks, bonds and real estate, are owned by the top 10 percent of wealthiest households. Most people own few stocks and bonds.

So, after the government’s well-intentioned intervention, we find that the rich have gotten richer. But if you are among the 90 percent, all that money-printing just left you out in the cold looking in.

And soon it will hand you the bill for the party.

The post-2009 boom in financial markets has closely tracked the increase in money supply created by the Federal Reserve’s quantitative easing. After the Fed began creating money out of thin air in 2008, it used much of it to buy U.S. government treasuries from the big Wall Street banks. That drove up treasury prices, drove down interest rates, and put more money in the banks’ pockets. The banks then took that money and looked for other places to invest.

Since interest rates were manipulated down by the massive Fed buying, the banks looked elsewhere to get a return on their money—thus they poured money into the stock market. The artificially low interest rates also forced investors and pension funds to take on more risk, as they too were pushed toward the stock and real estate markets to earn a return on investment. The hedge funds and sovereign wealth funds from around the world saw what was happening. Not wanting to miss an opportunity to exploit the Fed’s market intervention, they joined the low-interest-rate, money-is-confetti party too.

The artificially manipulated low interest rates had one other, even more dangerous side effect. They encouraged people to borrow massive amounts of money. Banks, for example, were allowed to borrow money from the Federal Reserve at close to zero percent. They then took this money and re-lent it to consumers in the form of mortgages at 4 to 5 percent. Low interest rates also allowed the banks to lend money to investors who eagerly snapped up the low interest loans to invest in the stock and real estate markets both at home and around the world. In March 2014, margin debt (money borrowed to invest in stocks) surpassed the record highs set in 2007.

Perversely, perhaps criminally, the banks were also allowed to (and almost universally did) borrow money at near-zero percent from the Federal Reserve, a quasi-governmental institution, and promptly lend it back to the federal government at 2 percent on up to 5 percent. More free money for Wall Street courtesy of the Federal Reserve. This further twisted the distortions in the market.

For those in the know and with the means, these last five years have been the financial party of a lifetime. But what’s going to happen now that the Federal Reserve has taken their punch bowl away? Is the party over?

The Federal Reserve may not be handing out free money anymore, but it is still keeping the band playing for now to keep the partygoers happy. If you are one of Wall Street’s finest, Uncle Sam in the red-and-white-striped party hat will still give you a near-zero-percent nine-figure loan. So even though it’s way past their bedtime, the markets may hum along for a little longer.

On the other hand, there are a lot of sickly looking people who have clearly drunk and danced far too much.

According to statistics quoted by Arends, the stock market at current levels may be 80 percent overvalued compared to where it would be without Federal Reserve intervention. Could a generational market crash be looming?

We haven’t seen that hard reality hit yet. The drums are still banging away, the saxophones are blazing, and inebriated partiers have taken to the tabletops. The Fed threw the party. It hired the band. It invited the guests. It spiked the punch bowl. But now the keg is empty and the party is getting out of hand. It hopes it can now walk off without a brawl breaking out.

The partygoers are more than a little inebriated, and the odds of ending this politely are about as good as the lady with the lampshade on her head saying “quantitative easing” without slurring her words.

When reality hits this party, there will be nothing left of this house.