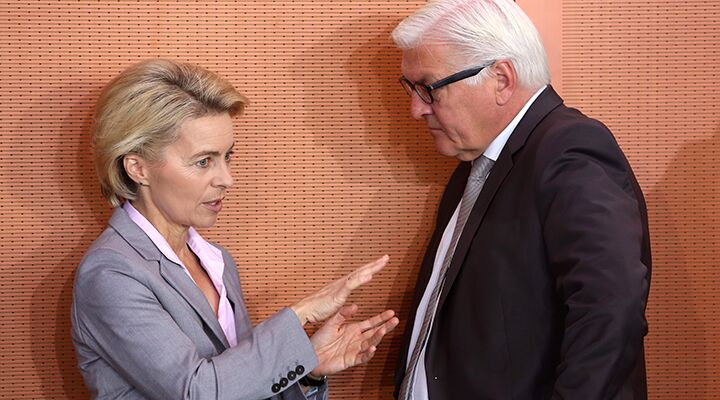 Germany’s military commitments may be small compared to America’s, but over the last decade, Germany has operated a series of overseas military missions unprecedented in its postwar history—all without a corresponding increase in military spending. The result is a military stretched to its limits.

“The poor state of Germany’s military, which has dominated headlines in the last week, is also threatening the peace of the country’s coalition government,” wrote the Local. A German-language paper said the news from Germany’s armed forces is reminiscent of a slapstick movie.

Only 42 of Germany’s 109 Eurofighters, and 38 of its 89 Tornados are flight-worthy. Only 70 of the army’s 180 armored vehicles are operational. Its navy has similar problems only 7 of its 11 ships are combat ready along with a quarter of its submarines.

Only 42 of Germany’s 109 Eurofighters, and 38 of its 89 Tornados are flight-worthy.
Two weeks ago, Germany’s military trainers, en route to help the Kurds in Iraq, were delayed when their Transall transport plane broke down, stranding them in Bulgaria. They borrowed a plane from the Dutch to deliver the weapons shipment. That broke down too. Last Monday, September 22, German Defense Ministry confirmed that 36 of the navy’s 43 helicopters could not fly, and that it may need to scale back its involvement in the EU anti-piracy mission in the Horn of Africa due to the shortage. This Monday, it emerged that another Transall plane broke down on the way to delivering equipment to fight Ebola, and was stuck in Gran Canaria in the Canary Islands all weekend. The next day, Parliamentary Secretary for Defense Ralf Brauksiepe confessed that Germany is overworking its soldiers in Turkey, operating its Patriot air defense system.

Now German soldiers due to return from Afghanistan have been delayed for nearly a week because the military doesn’t have any planes available to fly them home. The army is looking into borrowing Chancellor Angela Merkel’s VIP jet to fly them back.

According to the Süddeutsche Zeitung, von der Leyen called an emergency meeting September 26 to confront the mountain of maintenance problems. Then on September 28 Bild am Sonntag published an interview with von der Leyen, where the defense minister warned that the nation could not fulfill the promises it has made to nato: it cannot make the aircraft available in 180 days in case of an emergency.

Germany has tried to assume a military role in the world without the military budget to support it. The only way it has managed to do this has been to cut back on maintenance and investment in new equipment, leading to the problems it faces today.

Many former and current defense leaders in Germany want an increase in defense spending. “It is appalling that Germany recently decided to cut military spending by about €800 million (us$1.05 billion) in 2015,” former German Defense Minister Karl-Theodor zu Guttenberg wrote in the Wall Street Journal September 3.

Today, he is no longer a lone voice. “By Monday, when the latest failure of Germany’s limited air capabilities became known, politicians were demanding explanations from Ursula von der Leyen, the country’s defense minister, and pondering aloud the possible revision of what has long been a political no-go: raising the budget for defense spending,” the New York Times wrote on Monday.

It is appalling that Germany recently decided to cut military spending by about [US$1.05 billion] in 2015.
Karl-Theodor zu Guttenberg
Former German Chief of Staff Harald Kujat said that current levels of defense spending are “embarrassing for such a large country as Germany with such a big economy.”

“Now I am being asked whether we should spend more money,” German defense expert Thomas Wiegold said. “That has never happened before.”

While top German politicians, like President Joachim Guack and von der Leyen, want Germany to play a more active military role, the German public is not so keen. There are few votes to be won in increasing in defense spending.

After the events of the last few weeks, however, that increase seems set to occur. Von der Leyen has indicated that she wants more money. “From 2016, an increase of the budget will be necessary, for as much money as is necessary to fulfill all tasks,” Christian Democratic Union defense spokesman Henning Otte said.

As the United States retreats from the world, Germany is forced to play a more active military role—against the will of most of its citizens. This debate over military spending is a natural consequence of that shift. To take up America’s military slack, European nation’s militaries will have to work together more closely—an area where Germany is leading the way—or increase spending.

America is disengaging from Europe to take care of its own regional problems, forcing Europe to militarize. This transformation may require Germany, as well as other European nations, to increase their spending. For more on who will take over as America steps off the world stage, read “The World’s Next Superpower.”