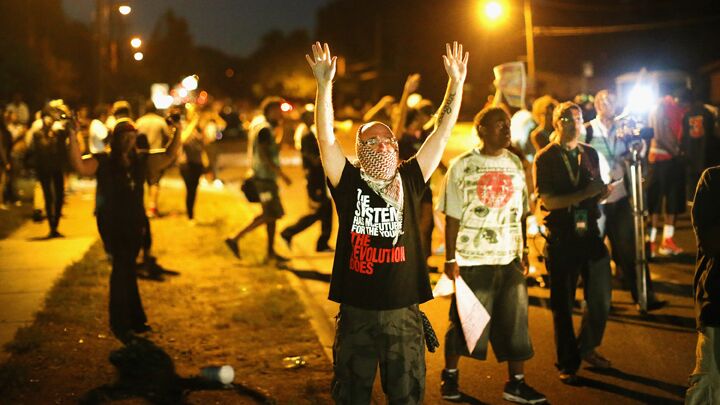 Riots tear up Ferguson, Missouri, after the fatal shooting of Michael Brown.

This was the scene that marred the streets of Ferguson, Missouri, Sunday night, after a vigil for Michael Brown, an unarmed black youth who was shot and killed by a police officer Saturday afternoon.

Michael Brown and Dorian Johnson were reportedly on their way home, walking down the middle of Canfield Drive, when a police officer ordered them to walk on the sidewalk.

According to county Police Chief Jon Belmar, when the officer got out of his car, “Brown pushed the officer back into his car and ‘assaulted’ him in the vehicle.” One shot was fired in the car. The officer then got out of his car and fired at Brown, killing him in the street. Reports say Brown had his hands up, indicating he was unarmed, but was still shot. Many details of what led to the 18-year-old’s death are still unknown.

Hours later, the looting started. With darkness descending, a QuikTrip convenience store was looted and set ablaze. The looting spread as multiple hundreds of people broke into stores, stealing merchandise, shattering windows and spraying graffiti. At least 15 stores were vandalized.

Eventually, armored police with batons and shields, accompanied by attack dogs, arrived to stop the chaos. By 3:30 a.m., 32 suspects were arrested for burglary, assault or theft.

On Monday, Jennings School District canceled classes, saying: “At this time we do not feel it’s safe for our students to walk to school.” Classes remain canceled.

That night, crowds gathered again and threw rocks at the police. Officers used tear gas and shot bean-bag rounds into the crowd. Five more were arrested.

Many of America’s inner cities are boiling over with racial tension. Hooligans and criminals are quick to exploit the chaos. The mayor of Ferguson noted that “a lot of the people [rioting] aren’t even from our town; but they came in and stole from our businesses and left our town in ruins.”

With more vigils scheduled, will we see more riots take place in the coming weeks? This evening, August 14, more than 50 cities have planned to hold vigils as part of the National Moment of Silence.

We don’t know how far-reaching events in Ferguson will be, however, we do know that such riots were prophesied. And more are set to come.

The book of Ezekiel, for example, has some of the strongest warning about internal warfare. The first part of Ezekiel 5:12 states, “A third part of thee shall die with the pestilence.” Trumpet editor in chief Gerald Flurry referred to this prophecy in his booklet Ezekiel: The End-Time Prophet. He wrote:

The word pestilence just means destruction or death (see Gesenius’ Hebrew-Chaldee Lexicon). One definition of the root word is “to lay snares, to plot against, to destroy.” So this pestilence could be a plague of violence or burning—not necessarily a physical disease at all! It can be defined as a plague of violence or rioting—such as the Los Angeles riots in 1992 or the Sept. 11, 2001, terrorist attacks! Why would the first third be burned with fire (Ezekiel 5:2), if it refers to a disease epidemic?

This is talking about race riots prophesied to happen during this end time in Israel, Britain and especially America.

Race riots are coming to America. Many of its inner cities are already seething, ready to explode.

All it took was one death to set off destructive riots in Missouri—and this while America is relatively wealthy; food is still readily available on store shelves and people’s tables. What will happen if something changes that? How many city streets will look like West Florissant Avenue did on the morning of August 11? To learn more about the coming riots, read “London’s Riots Were Prophesied.”