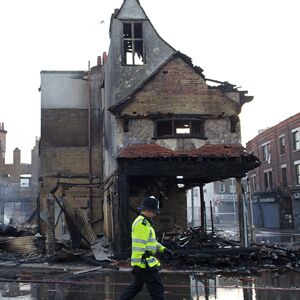 America’s moral breakdown is about to come home to roost.

We have all seen the damage caused by the riots in Britain. It was uninhibited anarchy and lawlessness. For five days, animal-like mobs burned businesses and homes, hospitalized police officers, looted shops, assaulted citizens, and even killed people.

It was a national disgrace.

And it is exactly what is coming to America—and soon.

In fact, the riots have already begun. Just days before the burning of London, a riot broke out at the Milwaukee State Fair. Yet, because of its racially charged nature, most media outlets buried the story.

As the sun went down at the end of the first day of the Wisconsin State Fair on August 5, it was as if the lights of civilization were temporarily snuffed out with it. According to the Journal Sentinel, the family-friendly event quickly descended into something out of tribal Afghanistan.

Eric, an Iraq war veteran, said that what he saw Thursday night compared to combat. “When I saw the amount of kids coming down the road, all I kept thinking was: There’s not enough cops to handle this. There is no way.”

“It would have taken the National Guard to control the number of kids that were coming off the road,” he said.

And those kids were violent.

Reports indicate that 300 to 400 young black youths began a “rampage” as they left the state fair. But it was a racially targeted rampage—with the mob pulling people out of cars and pillaging what they could grab, knocking people off bikes, beating pedestrians, and attacking the few onsite police officers.

“It looked like they were just going after white guys, white people,” said resident Norb Roffers. “We were just like cattle being herded out of the park, and they were picking and choosing who they wanted to beat on.” Roffers says his injuries are just limited to the headache he received after being hit in the head from behind with a traffic cone.

“It was 100 percent racial,” confirmed Eric. “As the mob ran through traffic, jumping on cars, they were looking through windows to see who they would attack.”

“It was like a scene out of a movie,” one witness said.

One white 15-year-old was knocked off his bicycle and surrounded by a mob who beat him unconscious. He was left lying in the street in the fetal position and then kicked and drop-kicked by other teenagers who happened to see him; finally other later-arriving teenagers threw his limp body into some bushes—as casually as someone might take out the trash.

“I don’t believe [last night’s events] are random,” said Mayor Tom Barrett. Perpetrators will be prosecuted regardless of race, he said, and more security would be provided to stop future occurrences.

Being as outspoken as he is, Donovan is sure to make enemies—but who can deny the dangerous, degenerating condition of America’s welfare-dependent cities?

On August 4, a Philadelphia mother spanked her misbehaving child while on a city bus. Another passenger confronted her, threatening to call the child-abuse authorities. The mother turned away and made a cell phone call. Minutes later the mother and child walked off the bus while four members of her family walked up and opened fire on the bus with weapons, including a machine gun.

One month earlier, a mob of around 60 black teenagers beat and robbed a smaller group of white people at a fireworks exhibition in Milwaukee.

Philadelphia is under a curfew due to inner-city violence. Philadelphia Mayor Michael Nutter said: “You have damaged your own race. If you want … anybody else to respect you and not be afraid when they see you walking down the street, then leave the innocent people who are walking down the street minding their own d- - - business. Leave them alone.”

Now Kansas City is considering a curfew for teenagers too. Over the weekend, a shootout injured four people and forced Mayor Sly James to dive for cover and his bodyguards to pull their weapons.

America’s cities are exploding with violence. And here is the scary thing: The economic hard times haven’t even started yet.

Back in London, Prime Minister David Cameron said a “slow-motion moral collapse” was behind the rioting. “This must be a wake-up call for our country,” he said. “Social problems that have been festering for decades have exploded in our face.”

We have to have the “determination to confront” these issues he said. It is time to “fight back.”

Good luck with that.

More people rely on government for their daily bread in America and Britain than the entire population of Greece, multiple times over.

But here is the point: They all have their government-provided daily bread!

What will our cities look like when the social welfare and other government money handouts stop coming? And that is about to happen. Whether through deflation and debt collapse, or inflation and dollar value destruction, the Western world’s welfare state economic model is failing. Already, Greek-style austerity is looming over government budgets. Forced social spending cuts are coming.

And when they do, America’s cities will burn just as fiercely as Britain’s.

But economic collapse has a deeper cause. America’s and Britain’s welfare states are but an outgrowth of their moral state. The welfare system is an immoral system that harms both its users and abusers, and it is contributing to social breakdown and economic collapse. But it is only a symptom of the true cause.

There is a cause for America’s and Britain’s social problems. There is a reason why thousands of unsupervised youth and teenagers feel they have the right to riot, steal, kill people, and burn our cities. And, to give David Cameron credit—it does get back to moral collapse.