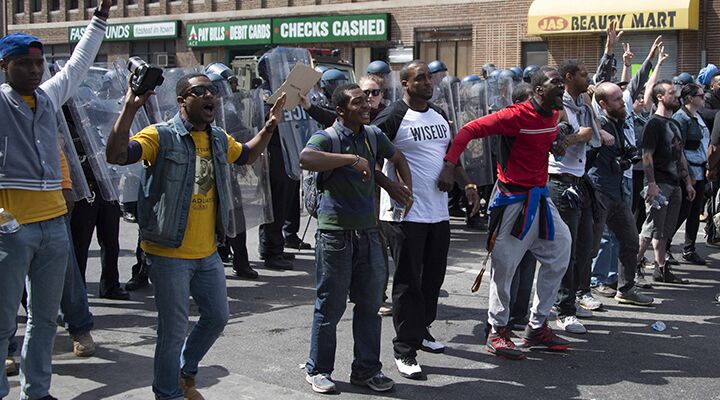 Some of our leaders are right now igniting the spark that will set America on fire with race riots and civil unrest.

Most Americans refuse to think seriously about how close this country is to experiencing race riots and large-scale civil unrest.

We meet all the criteria: rising unemployment, overloaded and failing social systems, mass discontent and uncertainty, loss of faith in leadership, a cultural disdain for law and morality. As these problems intensify, they’re fueling tension, even deep-seated hatred, between blacks and whites, rich and poor, and Democrats and Republicans.

Look around: The kindling is set. All that’s needed is a lit match.

It won’t take much, either. An incident like the beating of Rodney King in 1991 would do it. Perhaps a policeman unloading his pistol on one of these flash mobs; maybe it’ll be a protest that starts small but quickly gets out of hand. It could be a gang beating the wrong person, or a fed-up vigilante group taking matters into its own hands. In the age of cellphone cameras, Twitter and YouTube, the incident will likely be caught on camera and go viral, transforming it overnight from an isolated event into a national issue.

As grim as that scenario is, it gets worse: A growing contingent of leaders are actively seeking to incite race riots and civil unrest.

Consider and be sobered.

On Monday, Jimmy Hoffa, president of the labor union Teamsters, opened for President Obama at a rally in Detroit. “We got to keep an eye on the battle that we face: the war on workers. And you see it everywhere, it is the Tea Party. And you know, there is only one way to beat and win that war. The one thing about working people is we like a good fight. And you know what? They’ve got a war, they got a war with us and there’s only going to be one winner. … President Obama, this is your army. We are ready to march. Let’s take these sons of _______ out and give America back to an America where we belong.”

This man was warming the crowd for President Obama—by, apparently, advocating civil war!

Then there’s Indiana Congressman Andre Carson, who at an August 22 Congressional Black Caucus (cbc) meeting in Miami attacked the Tea Party as the chief stumbling block to a U.S. economic recovery. “Some of these folks in Congress right now would love to see us as second-class citizens,” he told the crowd. “Some of them in Congress right now of this Tea Party movement would love to see you and me hanging on a tree.“

At a recent rally in Florida, Congresswoman Frederica Wilson explained that she has heard Republican senators state that they are prepared to “die” before they approve tax increases. The audience’s response was disturbing. “Then they gonna have to die, they’re gonna have to die,” one audience member responded. Rather than silencing the call for blood, Congresswoman Wilson joined the chorus. “So we’re going to have to fight,” she stated. “We are going to have to fight them. We’re going to have to go up to their homes, so they have black people living in their districts too.”

In Texas, Congressman Al Green recently delivered a similar message. The Tea Partiers, he shouted, “don’t just go into their neighborhoods and protest, they come into the hood and protest! The question is this: What will we do? Will we allow the minority forces to speak for the majority? Or are we going to stand up for the things we believe in?! And are we willing to go across town and are we willing to go into other places beyond our comfort zones, and are willing to stand up for the cbc …?”

When you listen to speeches like that, you have to wonder how long it will be before one, ten, or ten thousand audience members grab their weapons, hop in their cars and set out “across town.”

In Detroit August 16, California Congresswoman Maxine Waters criticized President Obama for his bus tour through “white America.” “The Congressional Black Caucus loves the president too,” Waters said. “We’re supportive of the president, but we’re getting tired, ya’ll. We’re getting tired. … We want to give him every opportunity, but our people are hurting. … We don’t know why on this trip that he’s in the United States now, he’s not inany black community.”

This woman is playing with fire, and we’re all going to get burned.

In a speech a few days later, Waters took aim at the Tea Party. “As far as I’m concerned, the Tea Party can go straight to hell,” she stated. After the wild applause finally subsided, she added, “And, I intend to help them get there.”

Waters was speaking at Inglewood High School in California.

Even some within the White House seem to be on a war footing. Speaking at a rally of the American Federation of Labor and Congress of Industrial Organizations in Ohio recently, Vice President Joseph Biden referred to conservatives—fellow Americans he was elected to serve and protect—as “barbarians at the gate.” The “other side,” he yelled, has “declared war,” and it’s about time we “stand up.” If you’ve got the time, watch the video. Mr. Biden’s words are telling, but it was the sincerity with which he spoke, his tone of deep-seated disdain and hate, that was most compelling.

This man is America’s vice president.

No wonder many expect the upcoming election to be a bloodbath. Speaking on msnbc last week, Howard Fineman stated that the 2012 election is “not going to be a ‘Morning in America’ campaign.” Rather, it’s going to be a “darkness at midnight campaign about the Republicans,” he warned.

To be sure, plenty of Republicans are also brimming with anger toward the left. Across the country Republican personalities in both the government and media are pulling no punches in battling liberal opponents. And growing numbers of Americans are preparing for a civil war they now consider inevitable. “Whether Americans want war or not, it is coming,” wrote the co-founder of Right Side News yesterday. “If you are not ready for what’s coming, you had better get ready, because it’s coming, whether you are ready or not. And it’s coming very soon! The left will not take no for an answer. The left has us between a rock and a hard place and there is no painless way out of this corner.”

From one end of this land to the other, tension and hatred is welling, in our suburbs, in our malls, in our schools, and in the offices of state and federal governments. Race riots and large-scale civil unrest are brewing.

And rather than attempt to diffuse the tension, too many of our elected leaders—people who are supposed to possess the intellectual tools and the moral character to mediate conflict and preserve the peace—have positioned themselves at the vanguard of these armies.

Some of them are right now igniting the spark that will set America on fire with race riots and civil unrest!

The Trumpet doesn’t take sides in this issue. We don’t root for Republicans or Democrats; we believe both are deeply flawed in their ideologies and actions. Rather, Gerald Flurry (and the Trumpet) is tasked with the responsibility of making observations, considering events in the context of Bible prophecy, and then delivering God’s view of world events.

The Prophet Isaiah speaks a lot about America and Britain in the “last days” (Isaiah 2:2) just before Jesus Christ’s Second Coming. In Isaiah 1 verse 5 it says that “the whole head is sick, and the whole heart faint.” About this prophecy, Mr. Flurry explains: “God is saying the power structure (primarily white) that leads these nations of Israel is sick! … Neither the leaders nor their followers have the will or the strength to get to the roots of race riots or terrorist attacks and solve them once and for all …. Their ‘heart’ is so weak and unhealthy that the governmental system is about to ‘faint,’ or collapse!”

Verse 7 reveals what will happen as a result of this leadership crisis. “Your country is desolate, your cities are burned with fire: your land, strangers devour it in your presence, and it is desolate, as overthrown by strangers.” This is a terrifying passage!

“Because of the sin these nations are laden with, and because of the weakness of our leaders, we will experience desolation and burning—all at the hands of ‘strangers,’” writes Mr. Flurry.

“In other words, if we don’t repent, race riots and terrorism are going to get much worse,” he states.

This is not an easy message to preach, nor is it a pleasant reality to accept—but it isreality!

Will you accept it? Many people refuse to see this world for what it is. Right now many are burying themselves in the new football season, in the new season of television shows, in the glitz and glamor of Hollywood or their local mall. Others bury themselves in work, in projects, in the pursuit of stuff or power or wealth. That way they don’t have to contemplate the massive fires devouring Texas, the alarming outburst of flash mobs ransacking gas stations and stores, the gang violence in our cities, the array of leaders inciting racial conflict and civil unrest.

These people may be able to ignore reality now, but eventually one or more of these problems will come knocking on their door. By then it will be too late!

Don’t be one of these people. Don’t wait till the fire is devouring your neighbor’s home, till the riots are raging outside your door, till the shelves at your local grocery store are empty. It is important that you act now! “But the end of all things is at hand,” the Apostle Peter warned, “be ye therefore sober, and watch unto prayer.”

To start with, read Chapter Four of our free booklet Ezekiel: The End-Time Prophet. If after reading this chapter you feel compelled to learn more about Bible prophecy, and what you can do to avoid these end-time calamities, then request and study Repentance Toward God.