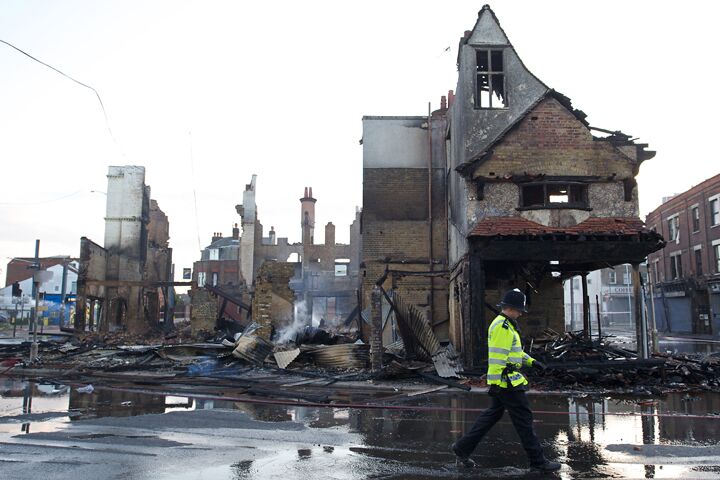 The violence in London has shocked Britain. Who could have foreseen that it would host widespread violence and looting? The Bible did. Its scriptures explain exactly what is happening in London.

“America, Britain and Israel have a terrible problem on their hands: violence. Violence from domestic troubles like race riots—violence from terrorist attacks,” wroteTrumpet editor in chief Gerald Flurry, based on prophecies in the Bible. “This violence is a much more serious danger than most people would ever imagine!”

“Your country is desolate, your cities are burned with fire: your land, strangers devour it in your presence, and it is desolate, as overthrown by strangers,” states Isaiah 1:7. This describes London exactly.

Another startling prophecy about these riots is in Ezekiel 5:12: “A third part of thee shall die with the pestilence, and with famine shall they be consumed in the midst of thee: and a third part shall fall by the sword round about thee; and I will scatter a third part into all the winds, and I will draw out a sword after them.”

In his booklet Ezekiel: The End-Time Prophet, Mr. Flurry wrote:

The word pestilence just means destruction or death (see the Hebrew and Chaldee Lexicon). One definition of the root word is “to lay snares, to plot against, to destroy.” So this pestilence could be a plague of violence or burning—not necessarily a physical disease at all! It can be defined as a plague of violence or rioting—such as the Los Angeles riots in 1992 or the September 11, 2001, terrorist attacks! Why would the first third be burned with fire (verse 2), if it refers to a disease epidemic?

The Bible tells us we can expect far more of these riots. In fact, they will cause the complete breakdown of society. Mr. Flurry continues:

The pestilence, or plague of violence, will cause many health problems that lead to famine. Sewage disposal will be disrupted. Gas lines will be broken. Jobs will be lost. Society will unravel and the collective panic will bring a stock market disaster! It will get so bad that violence and famine will take millions of lives!The Los Angeles rioting is just a type of what is going to happen to major cities in the whole nation! It is a stark prophecy of our future! Terrorist attacks, rioting and burning are the main thrust of the pestilence mentioned in Ezekiel 5. And this rioting will spread to other Israelite nations—unless people repent!

The Bible also reveals the cause of the riots. Before warning of the violence to come, Isaiah 1:5-6 state: “Why should ye be stricken any more? ye will revolt more and more: the whole head is sick, and the whole heart faint. From the sole of the foot even unto the head there is no soundness in it; but wounds, and bruises, and putrifying sores: they have not been closed, neither bound up, neither mollified with ointment.”

The riots happen because all society is sick. As Mr. Flurry writes: “Neither the leaders nor their followers have the will or the strength to get to the roots of race riots or terrorist attacks and solve them once and for all (see Daniel 12:9; 9:13; and Leviticus 26:19).”

The London riots started out with a racial aspect: A black man was killed by the police. Because of that, the police hesitated in their duty. David Green writes in the Telegraph: “Since the Macpherson report of 1999 the police have been hyper-sensitive about race. This attitude has now become so paradoxical that they find themselves standing aside when members of ethnic minorities are being harmed. The people who ran shops, or who lived in the flats above, were not given the protection they deserved.”

After quoting guidelines given to police, he writes: “In this kind of atmosphere, it’s not surprising that officers in charge of a riot think it safer to wait for orders from the top rather than use their discretion to protect the public without fear or favor.” This is just one part of the whole heart being faint, as Mr. Flurry points out:

Now, as a result, the police fear to act, even more than they have feared to in the past. Many policemen only feel secure if they do almost nothing. Other authorities also fear to act, thinking riots may be ignited in other cities. Our government is paralyzed by fear. The “whole heart” is “faint”! We no longer have control of our cities.

Now the riots have moved beyond race. Pictures released by police show whites and blacks looting. The riots are no longer about anger—they’re just an excuse to loot. An entire class of people has just figured out that if they all go out and loot at the same time, no one can easily stop them. It is the “flash mob” phenomenon on a massive scale. And this shows another way that the “whole head is sick and the whole heart faint.” Katherine Birdalsingh, who has taught in London’s schools, writes in the Telegraph:

Many of these mindless thugs involved in the riots don’t think more than 10 minutes into the future. They think that stealing trainers is “fun,” not even considering that it might be wrong. Many of them are, quite literally, unable to read and write: 17 percent of 15-year-olds are functionally illiterate. If you de-educate an entire generation, if you constantly make excuses for their behavior, if you never teach them the difference between right and wrong, then chaos is what you reap. These young people are just implementing what they’ve learned at school!

Many parents no longer teach children any sense of right and wrong. This is the result. Birdalsingh points out how the political elite simply make excuses for the criminals. “I am so angry, so ashamed, so utterly dismayed,” she writes. “Our great capital city is on fire and even this isn’t enough to convince people that the excuse-making must stop!”

The “whole head is sick and the whole heart faint.” An entire class of young people have no sense of right and wrong. Their parents won’t discipline them. Politicians, parents and teachers will not even admit that the problem exists! London’s riots show that all of British society is sick.

These riots are a warning to the whole world: This is what happens when a nation rejects God’s laws and revolts against His way of building a family. These riots are only going to get worse.