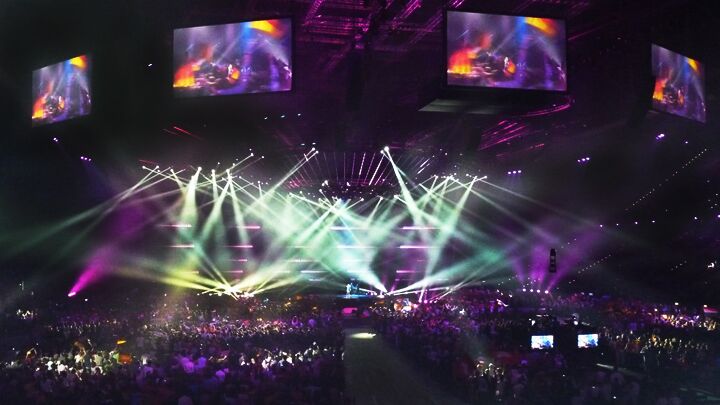 Russia will revive the Cold War-era Intervision Song Contest this October, according to July 25 reports.

Intervision was first established back in 1977 as a direct rival to the Europe-oriented Eurovision Song Contest. Few people in the participating Soviet nations had private telephones, so Intervision’s television viewers would turn on their house lights if they liked a certain song, or off if they didn’t. The state energy company would then record the size of each power spike, and report the results to the television company to determine points for each contestant. As the Soviet Union began to weaken in the early 1980s, Intervision was discontinued.

All these moves serve Putin’s general purpose of resuscitating the Soviet Empire. But this latest one—reviving the song contest—also serves another specific purpose.

An Alternative to ‘Abomination’

Russia entered Eurovision this year, and lost to an openly booing crowd. The audience was not criticizing the Russian contestants’ singing, but their country’s annexation of the Crimean Peninsula. More important than the hostile treatment Russia endured was Eurovision’s 2014 winner: a bearded drag queen from Austria going by the name Conchita Wurst.

Wurst accepted the victory through mascara-tinged tears, saying, “This night is dedicated to everyone who believes in a future of peace and freedom. You know who you are. We are unity and we are unstoppable. … I dream of a world where we don’t have to talk about unnecessary things like sexuality, who you love. I felt like tonight Europe showed that we are a community of respect and tolerance.”

Most of the Austrians, British, Dutch, French and other Europeans melted into rapturous euphoria at Wurst’s win and rainbow-colored words.

Not so Putin. When asked to comment on Wurst’s victory, he said, “The Bible talks about the two genders, man and woman.” People living in a way that blurs the line between the two genders, such as Wurst, “should not be aggressive, or put it up for show.”

The Russian Orthodox Church, an increasingly close ally of Putin’s, went a step further. It called Wurst an “abomination” and said the Eurovision win represented “one more step in the rejection of the Christian identity of European culture.”

What’s the solution to the decadence of Europe and Eurovision? In Putin’s view, it is Russia and the strictly “straight” Intervision. He said his decision to revive it was basically a protest to the collapsing morality of Europe and the United States. “For us it is important to reaffirm traditional values,” Putin said of Intervision’s revival.

It is the latest of many steps he is taking to portray himself, and Mother Russia, as lone defenders of traditional family values in a world led by a morally bankrupt West.

It is the latest of many steps he is taking to portray himself, and Mother Russia, as lone defenders of traditional family values in a world led by a morally bankrupt West.
In December, Putin said, “Many Euro-Atlantic countries have moved away from their roots, including Christian values. Policies are being pursued that place on the same level a multi-child family and a same-sex partnership, a faith in God and a belief in Satan. This is the path to degradation.”

Kirill i, the head of the Russian Orthodox Church, echoed those sentiments the next month saying Western powers are engaging in the “spiritual disarmament” of their people. “We have been through an epoch of atheism, and we know what it is to live without God,” Kirill said. “We want to shout to the whole world, ‘Stop!’”

This is an exact reversal of the Cold War era, which many viewed as “Christian” America against the “godless” communists of the ussr.

In all of this, Putin is tapping into the deep-rooted abhorrence that many around the world feel toward the West’s embrace of promiscuity, divorce, feminism, pornography, homosexuality, abortion and so on. But as he portrays Russia as the righteous answer to the West’s embrace of godlessness, he also invokes divinity regarding Russia’s expansionism. “May God judge them,” Putin said after annexing Crimea in March, in words directed at the “Bolsheviks” who gave the peninsula to Ukraine decades ago.

History teaches that there is no more potent or dangerous force to sway populations toward a geopolitical aim than religion. This remains true in the modern world: Religion is at the heart of the myriad of ongoing conflicts in Africa and the Middle East; it is the main factor motivating Iran’s provocative foreign policy; and, believe it or not, it is even the coalescing force behind the seemingly secular European Union.

It should come as no surprise, then, that Russia is taking steps to harness the deluding persuasiveness of religion in order to promote its geopolitical agenda.

Mr. Putin’s intensifying efforts to portray Russia as a defender of traditional values is accentuating the divide between Orthodox East and Catholic West. The cultural fault line between Russia and its European rivals is running deep. And Putin’s continued emphasis on the diverging religious identities of the two sides is further deepening it. This increases the probability of conflict between them.

For more on the coming conflict between Russia and Europe, read “The Rise of Asia.”