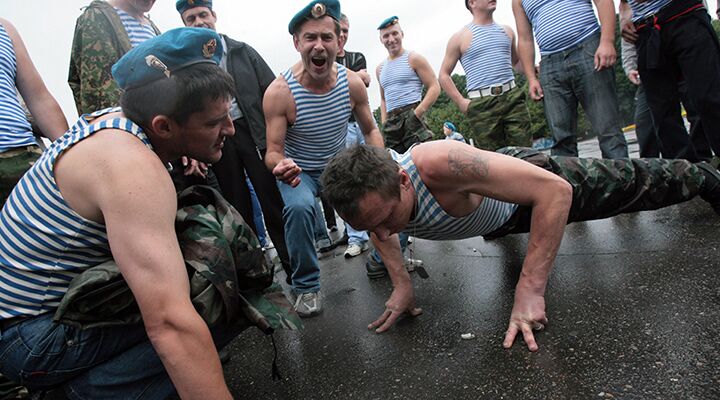 Is he preparing Russia to be a nation of soldiers?

Russian President Vladimir Putin revived a Soviet-era program Monday designed to boost the physical fitness of Russians throughout the nation.

The program, “Ready for Labor and Defense,” was first implemented in the 1930s under ruthless Russian dictator Joseph Stalin. Its purpose was to ensure that Russian comrades ages 6 and up were prepared to work and fight for the ussr. When the Soviet Union collapsed in 1991, so did the fitness program. Since then, Russian schools have been left to themselves when it comes to teaching physical education.

The new version of the program will standardize Russian P.E. once again.

To kindle enthusiasm for the program, Putin is reintroducing the old slogan Stalin used for the regimen: “Ready for work and for defense.” Putin says the program will “pay homage to our national historical traditions” and will teach Russians “to stand up for themselves, their family and, in the final run, the Fatherland.”

In light of Russia’s recent violent annexation of Crimea, the ongoing buildup of Russian troops near its border with Ukraine, and Moscow’s overall surge in nationalism and aggression, such news takes on significance.

In 2005, in a clear sign of his long-term goals, Putin said the demise of the Soviet Union “was the greatest geopolitical catastrophe of the century.” Since ascending to power, he has tenaciously labored to undo that unequaled “geopolitical catastrophe.” How? By rebuilding the Russian Empire one brick at a time.

Creating a customs union with Belarus and Kazakhstan was one brick, welding parts of Georgia to Russia was another, annexing Crimea was another brick. This pre-military fitness program is another.

Since the people of Russia are on a fitness high after winning more medals than any other nation at the Sochi Olympics, and since the Russians are rallying behind Putin like he’s a rock star, the program is bound to be popular.

The Trumpet has forecast, based on Bible prophecy, that Vladimir Putin will soon lead an army larger than any the world has ever seen. His revival of the soviet pre-military program could help lay the groundwork for the Russian portion of that massive military force. Scripture shows that Chinese soldiers will also comprise a large part of that massive military force, and it may not be a coincidence that China has had a national fitness program of its own in place since 1995. Russian analyst Lev Navrozov said this program and other aspects of Chinese society mean that China “is a military camp, in which everyone is a soldier” (World Tribune, Aug. 11, 2011).

For information about that vast Asiatic army soon to take shape, read “Is Vladimir Putin the Prophesied ‘Prince of Rosh’?”