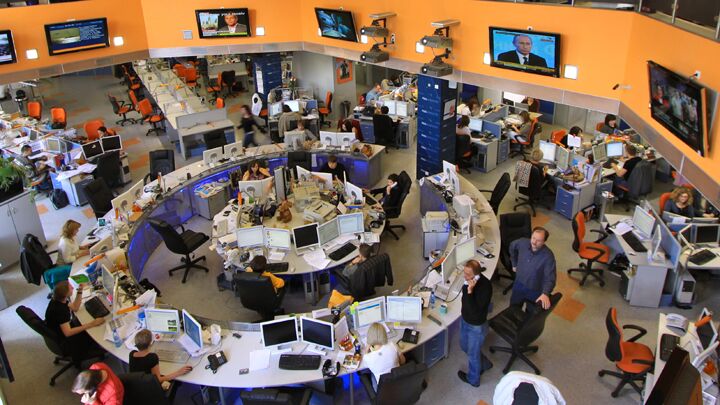 In a maneuver that tightens his clutch on Russia’s media, President Vladimir Putin dissolved the nation’s primary state news agency and replaced it with a propaganda machine. This move is just the latest of many revealing a new openly aggressive direction by the Russian president.

The ria Novosti news agency was government-controlled, but it didn’t toe the Kremlin line to the degree Putin deemed acceptable. He was displeased by the agency’s coverage of demonstrations in Russia that followed his 2012 announcement about running for president again. The last journalistic straw appears to have been ria Novosti’s reporting on the mass protests currently underway in Ukraine. So, on December 9, Putin dissolved the decades-old agency.

Its headquarters in central Moscow will be used by a new state-controlled organization, Rossiya Segodnya, which is essentially a propaganda apparatus for the Kremlin—completely uncritical of the Russian leader.

In a separate maneuver in late November, Putin greatly extended his grip over tv and radio when the media arm of state-controlled Gazprom bought Profmedia.

Such moves prove the new authoritarian direction Putin is taking, Serge Schmemann said in a recent New York Times op-ed. “[I]n replacing a respected news agency with a propaganda machine, Mr. Putin followed the more openly aggressive stance of his return to the presidency in May 2012—what Russians call Putin ii, or Late Putin.”

This more openly aggressive “Late Putin” or “Putin ii” is something the Trumpet has been anticipating. We predicted his second, more dictatorial phase in our May/June 2012 issue, referring to it as “Dark Rider Putin.”

As Vladimir Putin enters into the Kremlin once again, he does so with more power than any Russian since the collapse of communism. And the stage is set for him to take on a new and much more dictatorial role.History proves that once a dark rider becomes Russia’s ruler, he uses every possible measure to secure the nation: Domestic challengers are crushed, economic life is completely subjugated to Moscow’s needs, and Russia’s military is built up with the goal of securing and expanding the nation’s borders. Putin has long been working to rebuild Russia’s influence in its former Soviet periphery, and analysts believe his reelection will intensify these efforts.

Besides his clampdown on the Russian media, in recent weeks Putin has also yanked Ukraine away from years worth of talks toward EU cooperation back into Moscow’s orbit, claimed sovereignty over the Arctic, and has said Russia is the “moral compass of the world.”

These are milestone moves—and they are becoming routine for President Putin.

Editor in chief Gerald Flurry explained in the January 2004 Trumpet issue that the most significant aspect of Russia’s resurgence would be its catalytic effect on European unification:

A more dictatorial Russian government is coming fast …. That power will be able to challenge Europe when nobody else can, including the U.S. … Russian elections have recently moved President Vladimir Putin much closer to becoming a dictator. This strikes intense fear in Europe. The Europeans still remember how violent Russia was in World War ii, and Russia is a close neighbor with massive piles of nuclear weapons. … The Russian election is triggering a fear that will hasten the uniting of the European Union. The Russian election will cause Germany and other European nations to want a stronger leader. Throughout history, Germany has often sought a strong leader. Bible prophecy says it will do so again—for the last time!

Putin’s tightening grip on the Russian media and similar actions have sobering implications for the short term, but Bible prophecy makes plain that they immediately precede the most hope-filled event ever to occur in the history of the universe. To understand how today’s headlines about Russia intricately connect to this awesome future, check back with theTrumpet.com soon to read Mr. Flurry’s article in our February 2014 issue, “Is Vladimir Putin the ‘Prince of Rosh’?”

Or to begin receiving hard copies of our print edition each month—for absolutely no charge, no follow-up and no obligation—just click here.