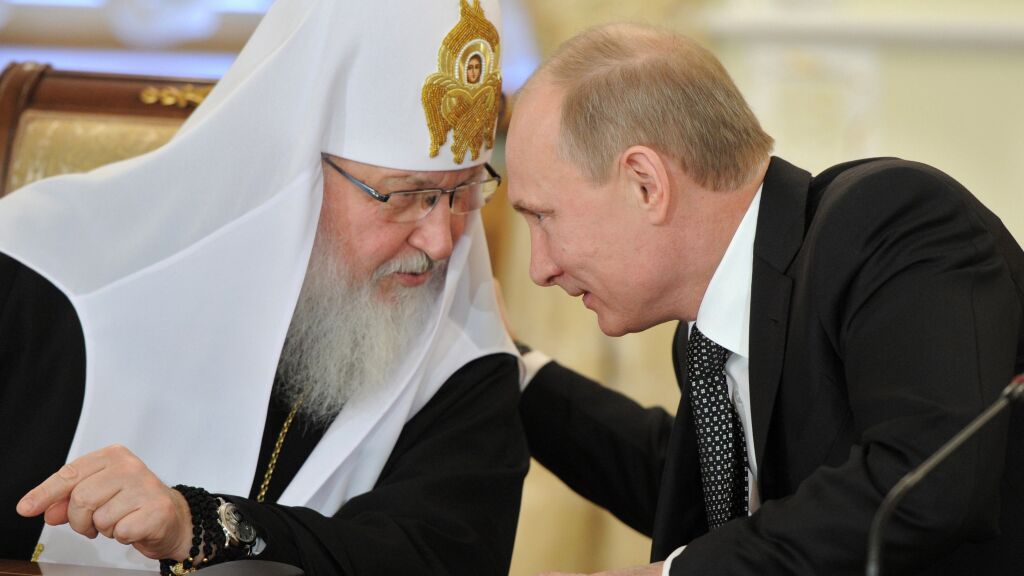 “In principle, Ukraine does not independently exist,” said Russian Orthodox Church leader Kirill i during a June 18 address. Ukraine is instead part of “the historical territory of Russia,” the patriarch said, according to a report by the Kiev-based Espreso tv.

Such a stance on Ukraine mirrors that of Russian President Vladimir Putin. In 2005, Mr. Putin said the demise of the Soviet Union was “the greatest geopolitical catastrophe of the [20th] century.” Ever since, his prime objective has been the rebuilding of Russia’s influence in its former Soviet periphery—especially in Ukraine.

Although Putin never tried to hide what he calls “his deep Christian faith,” he did avoid overtly religious displays and rhetoric up until around 2012. That year, after tens of thousands of mostly-liberal Russians protested his return to the presidency, Putin responded by leaning on the Russian Orthodox Church’s conservative appeal.

With more than 160 million followers worldwide—including 70 percent of Russian citizens—the Russian Orthodox Church has proven a powerful comrade for Putin.
Since then, he has forged a close alliance with the church.

With more than 160 million followers worldwide—including 70 percent of Russian citizens—the Russian Orthodox Church has proven a powerful comrade for Putin. It has helped him paint his opponents as lawless liberals. And—as demonstrated by Kirill’s June 18 statement—the church has given Putin’s expansionist foreign policy a stamp of divine approval.

The Kremlin and church have also walked in lockstep on such issues as the independence of Georgia’s pro-Russia breakaway states and the Syrian crisis.

Dmitry Oreshkin, an independent political analyst in Moscow, says this lockstep agreement is to be expected given the political climate in Putin’s Russia. “On Ukraine, as elsewhere, the Russian Orthodox Church these days unfortunately cannot have any stance different from the state’s one because it is becoming more and more an instrument of state policy,” he said.

Righteous Russia vs. the Godless West

Just as Putin has cozied up to the conservative Russian Orthodox Church in order to work against liberals within Russia, so he has also leaned toward the church in order to paint Russia as a defender of traditional values in a world led by a morally broken United States and Europe.

In December, Putin said: “Many Euro-Atlantic countries have moved away from their roots, including Christian values. Policies are being pursued that place on the same level a multi-child family and a same-sex partnership, a faith in God and a belief in Satan. This is the path to degradation.”

Kirill echoed those sentiments the next month saying Western powers are engaging in the “spiritual disarmament” of their people. “We have been through an epoch of atheism, and we know what it is to live without God,” Kirill said. “We want to shout to the whole world, ‘Stop!’”

This is an exact reversal of the Cold War era, which many viewed as “Christian” America against the “godless” communists of the ussr.

History teaches that there is no more potent or dangerous force to sway populations toward a geopolitical aim than religion. And this remains true in the modern world.
In all of this, Putin and Kirill are tapping into the deep-rooted abhorrence that many around the world feel toward the West’s embrace of promiscuity, divorce, feminism, pornography, homosexuality, abortion and so on. But even as Putin and Kirill portray Russia as the righteous answer to this embrace, they also invoke Divinity regarding Russia’s expansionism. “May God judge them,” Putin said after annexing Crimea in March, in words directed at the “Bolsheviks” who gave the peninsula to Ukraine decades ago.

History teaches that there is no more potent or dangerous force to sway populations toward a geopolitical aim than religion. And this remains true in the modern world: Religion is at the heart of the myriad ongoing conflicts in Africa and the Middle East, it is the main factor motivating Iran’s provocative foreign policy, and it is the major coalescing force behind the seemingly secular European Union.

It should come as no surprise, then, that Russia is taking steps to harness the deluding persuasiveness of religion in order to promote its geopolitical agenda.

Mr. Putin’s increasing public emphasis on the Russian Orthodox religion in order to justify his geopolitical aims is accentuating the divide between the Orthodox east and the Catholic west.

In the aftermath of Russia’s annexation of Crimea, the civilizational fault line between Russia and its European rivals is running deep. And Putin’s emphasis on the diverging religious identities of the two sides is further deepening it. This increases the probability of conflict between them.

For more on the probability of conflict between Russia and the EU, read “The Crimean Crisis is Reshaping Europe.”