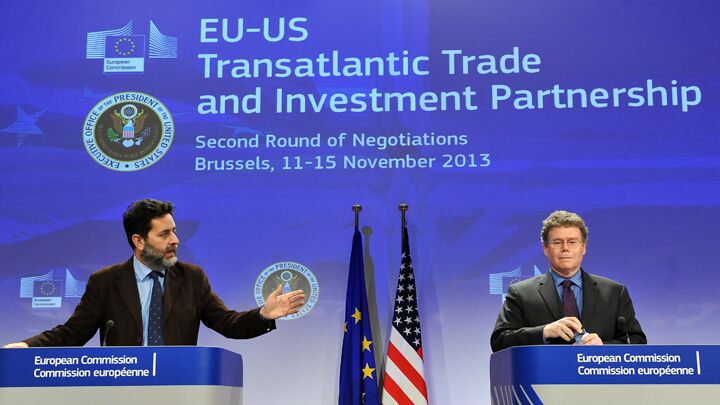 A little-known pact being negotiated between Washington and Brussels concerns the transfer of American sovereignty to globalist bodies outside the United States.

Remember the referendum in America about whether or not European corporations should be able to strike down our laws, subvert our rights, and circumvent our national sovereignty? No? That’s understandable. In fact, we never had such a referendum. All current negotiations on the Transatlantic Trade and Investment Partnership (ttip) are being conducted by unelected Washington technocrats—away from the eyes and ears of the general public.

The ttip is a plan to create a single economic market encompassing the United States and the European Union. Some have described it as an economic counterpart to the North Atlantic Treaty Organization military alliance.

The agreement isn’t just another free-trade pact. In addition to establishing a transatlantic free-trade area, it would harmonize U.S. and EU regulations governing industrial standards, labor laws and intellectual property rights. To enforce these harmonized regulations, the European Commission is insisting on an Investor-State Dispute Settlement Mechanism. As reported by George Monbiot at Guardian Unlimited, these mechanisms would allow megacorporations “to sue governments before secretive arbitration panels composed of corporate lawyers.”

Such arbitration panels would bypass domestic courts and override the will of national legislatures. They would subject the United States to the same type of antidemocratic, technocratic regulation that member states of the European Union already have to endure. If Congress passed a law in violation of the new transatlantic regulations, the U.S. government would have to use taxpayer funds to compensate foreign corporations for their loss.

According to a leak published in December 2013, former EU Trade Commissioner Karel de Gucht proposed that a Regulatory Cooperation Council meet twice a year and prepare a regulatory program. This council would be composed of senior level representatives from the European Commission’s General Secretariat of the Council and the United States Office for Information and Regulatory Affairs.

Whether the Regulatory Cooperation Council is established or not, this much is sure: The implementation of the ttip agreement would transfer some level of U.S sovereignty to regulatory bodies outside the United States!

U.S. President Barack Obama met German Chancellor Angela Merkel last month to encourage the passage of this controversial trade union. While some 70 percent of the German people oppose the ttip, both Mr. Obama and Ms. Merkel announced that they hope for a deal by the end of this year.

During a recent address at a German-American Cultural Foundation luncheon, former German Defense Minister Karl-Theodor zu Guttenberg also touted the ttip as vital to transatlantic security, though he said an agreement before the end of 2016 is unlikely.

In a New York Times op-ed written three years ago by Guttenberg and Pierpaolo Barbieri, the authors likened the ttip to the 1957 Treaty of Rome—the agreement that established the European Economic Community and laid the foundation for the current European superstate.

“Given the complexity of the deal, it may be best to seek what Commissioner De Gucht called a ‘living agreement,’ one that can be furthered if and when the politics allow,” wrote Guttenberg and Barbieri. “The open-ended nature of the groundbreaking 1957 Treaty of Rome, which enshrined the concept of an ‘ever closer union’ in Europe, should be used as a template.”

What Guttenberg, De Gucht and their allies are advocating is really the economic—and eventually political—merger of the United States with the European Union!

It’s significant that most of the press coverage about the dangers of the ttip seem to be generated in Britain. While Americans seem to regard the ttip as just another trade deal, the British know from experience where such trade deals lead. In the 43 years since Britain joined the European Economic Community in 1973, London’s sovereignty has been eroded to the point where Britain isn’t much more than a province in an emerging European superstate.

The bureaucratic cabal that runs the EU now wants to engulf the United States into its corporatist empire!

Ironically, America is responsible for creating so many of the globalist movements that threaten it today. The Trumpet has long reported on how the U.S. government cooperated with the Catholic Church and former member of the Nazi Party to build a European superstate capable of helping Washington oppose the Soviet Union.

Karl-Theodor zu Guttenberg’s grandfather, Karl-Theodor Freiherr von und zu Guttenberg, cosigned the Declaration of Atlantic Unity with Clarence Streit and 240 other leaders from across Europe and the United States. The purpose of this 1963 declaration was to create a transatlantic economic zone similar to the ttip agreement currently being negotiated.

The 1963 agreement never came to fruition because Americans were reluctant to surrender national sovereignty to globalist bodies and Europeans feared being swallowed up by a much more powerful United States.

These fears persist to this day. For this reason, it’s unlikely the Transatlantic Trade and Investment Partnership will be passed into law through peaceful diplomatic negotiation. Bible prophecy does foretell a corporatist empire that will straddle the Atlantic Ocean in the time just before Jesus Christ’s return. This resurrected Holy Roman Empire will be led by Germany and the Vatican, and it will cause the “merchants of the earth” to wax “rich through the abundance of her delicacies” (Revelation 18:3).

Neither America nor Britain will join this empire willingly. Instead, both nations will be forcibly annexed into this German-led empire via a blitzkrieg-style invasion. Building up the European Union and Germany is one of the most foolish decisions America has made. America and Britain have forsaken God and have instead put their trust in foreign allies. They will soon find out the hard way that these foreign allies do not have their best interests at heart.

To read more about the dangers of America’s naive alliance with Germany, read editor in chief Gerald Flurry’s article “Alamogordo: A Mistake You Only Make Once.”