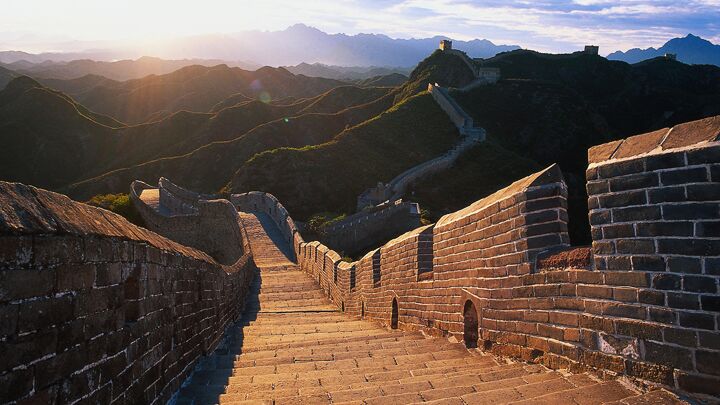 “Tuesday we made an early start and were driven to the Great Wall of China, surely one of the ‘seven wonders of the world’ in terms of man-built wonders,” wrote the internationally recognized ambassador for peace to millions of his readers in the February 1980 edition of The Plain Truth magazine.

“The wall is about 3,600 miles long, and on top is wide enough for a two-lane highway” Herbert W. Armstrong added, recalling his Dec. 4, 1979, visit. Enamored by the sheer size, scale and scope of the acclaimed edifice, he added, “Just another word here about the Great Wall of China. It is longer than the distance from Los Angeles, California, to New York, longer than the distance across the entire United States. Although I had seen pictures of it, I had not realized that it continues up and down over mountain tops. It was built in its entirety by hand labor, probably countless thousands of men. And it was hundreds of years in building. Apparently it was built to keep out the nomads from the north.”

Over time Mr. Armstrong developed a strong rapport with China’s leadership. In 1974, the Chinese chief of protocol invited him to visit Beijing. The overture was extended in Addis Ababa via Ethiopian Ambassador Mikasha, who planned to accompany him on the trip.

Mr. Armstrong was disappointed he was unable to visit in 1974 and meet with Mao Tse Tung, leader of the Earth’s most populous nation. However, he did write a lengthy cover article in the March 1977 edition of The Plain Truth recounting the message he wanted to deliver to Mao of Jesus Christ’s prophesied return and replacement of man’s governments by God’s divine, loving, peaceful rule.

In 1979, in the Great Hall on People’s Square, Mr. Armstrong was met by Tan Zhen-lin, vice chairman of the National People’s Congress and, at the time, one of the three top men in China. During this meeting, Mr. Armstrong explained prophetic events yet to unfold in Europe, the Middle East and Asia.

Relations reached a climactic high in 1984, when U.S. First Lady Nancy Reagan welcomed him to the White House on May 17. The visit was for meetings with government officials and to attend performances by the Little Ambassadors of Shanghai. As founder and chairman of the Ambassador International Cultural Foundation, Mr. Armstrong had been working with the Little Ambassadors and sponsored their four-city U.S. tour that included performances at Ambassador Auditorium, San Francisco, Seattle and Washington, D.C.

At the White House, Mrs. Reagan thanked him for sponsoring the Little Ambassadors’ tour. Thereafter, they moved into the famed East Room, which was used for entertainment by presidents Abraham Lincoln and Teddy Roosevelt. White House and Ambassador Foundation officials, along with over 400 guests from the Republican Women’s League, assembled for a special performance by the Little Ambassadors. After the entertainment, the children, first lady and Mr. Armstrong gathered for photographs. As he was departing the East Room, he noticed a piano and, to the delight of those present, sat down and performed a few pieces. Afterward, members of the Chinese media interviewed him regarding the Ambassador Foundation’s strong relationship with the Little Ambassadors of Shanghai, who by now were affectionately calling him “Grandpa.”

A key high point of Ambassador Foundation relations with China came two months later in the Great Hall at 10 a.m. on Nov. 7, 1984, as Mr. Armstrong was greeted by Deng Xiaoping. The visit to the world’s most populous nation was historic—it was the first time a leader from the Christian religion had been invited to speak before leaders of the People’s Republic of China. After group photographs, the two sat together at the rear of the room and, as was Mr. Armstrong’s custom, presented the leader of China with a piece of handcrafted crystal, titled Winter Trees, by the famed American artisans at Steuben.

Sadly, the death of the man who had met more world leaders in their private offices than any other came on Jan. 16, 1986, stalling the progress of his and Deng Xiaoping’s project set in motion at their meeting two years earlier: construction of the Golden Bridge Exchange Center in Beijing. A year before his death, Mr. Armstrong oversaw planning meetings conducted at Ambassador College with Chinese officials for the building to be modeled on the architecture and engineering of Ambassador Auditorium. The shelving of the project was exacerbated by the cadre that assumed control of the Ambassador International Cultural Foundation. They ultimately destroyed its humanitarian endeavors, lacking both the vision and diplomacy to further the momentum of cultural humanitarianism worldwide as led by the internationally recognized ambassador for world peace.

The Armstrong International Cultural Foundation has continued the legacy of Mr. Herbert W. Armstrong and the efforts of the humanitarian Golden Bridge Exchange. This was clearly on display when on February 28 this year, China’s National Symphony Orchestra made its debut performance at Armstrong Auditorium in perpetuation of the spirit of the efforts of its namesake and China’s Deng Xiaoping. With each movement of the orchestral alchemy, the audience responded with avid applause, and as the final dulcet tones rang out, the enthusiastic listeners responded with a standing ovation.

For more information on Herbert W. Armstrong, his legacy, and what the Bible foretells about China’s future, read He Was Right and Russia and China in Prophecy.