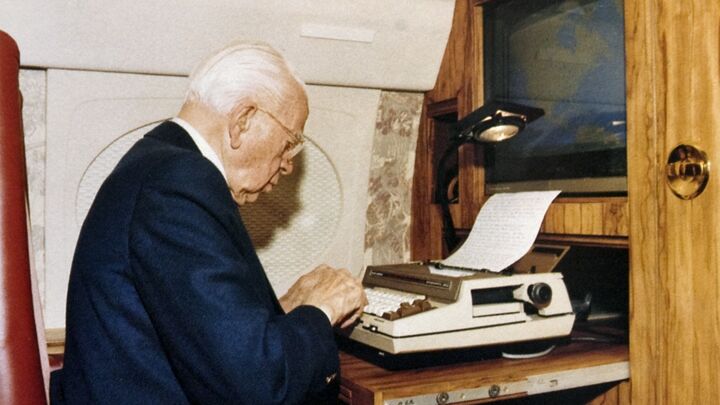 “I am writing from Bucharest, Romania. I am spending two or three weeks at the Otopeni Clinic, famous over all of Europe, recharging tired batteries,” wrote Herbert W. Armstrong to readers of the Feb. 28, 1977, Worldwide News.

I have kidded about being 37 going on 36. It is acknowledged by all, so far as I know, that I appear to be at least some 20 years younger than I actually am. I have said that not one man half my age (42) out of a hundred could keep up with the pace I do in God’s Work.But there may have been a slight misunderstanding in some of this, and I wish to be utterly frank, and not to pretend. It is true the dynamic power, energy and drive have been there. It is true that probably not one in a hundred half my age could do the work that I have been doing.But what I feel most of you have not realized is that much if not most of all that energy, vitality, drive and power has come from two sources. God, of course (Isaiah 40:29-31), and sheer determination and self-drive, even when I did not feel up to it.But God is with me, and I need your prayers! I need at least 10 more years of vigorous, active work to finish the Work that God has committed to me, or less, if God cuts time shorter, which is most likely!

The lens of history reveals just how specific his prayerful petition to God was miraculously answered. He would later cut his Romanian rest stop short by several days in order to fly to England for a speaking engagement. Forty-eight hours after his departure, a 7.3 earthquake, the largest in Romanian history, shook for a minute, killing 1,500 people and destroying much of the Bucharest landscape.

During the summer of that same year, after concluding meetings in Japan and Israel, Mr. Armstrong flew to the Ivory Coast on his first visit to what he termed “darkest Africa.” During the trip, “he contracted a touch of what seemed to be intestinal flu,” the Worldwide News of Aug. 29, 1977, reported. The bout, it said, “gave him a fever which was aggravated by a stomach upset he contracted in Abidjan, Republic of Ivory Coast.”

That August, shortly after returning from Abidjan, Mr. Armstrong’s heart stopped beating, and he ceased breathing. The ambassador for world peace lay lifeless for a brief moment in time.

His longtime friend and personal chauffeur Melvin Olinger recalls, “I was running errands in town for him the day of the heart failure. I returned to his house some 20 to 30 minutes after the attack. Nurses said he stopped breathing for a minute and a half. Those of us there were all silently praying for God’s miraculous intervention.”

Then, dramatically, after being anointed (James 5:14; Psalm 103:3; Isaiah 53:5) and receiving cpr, he was revived, his heart began beating, and he gasped again the breath of life!

After 16 months of recuperation, during which time he continued producing a prolific amount of articles, Mr. Armstrong resumed world travel flying to Jerusalem on Dec. 11, 1978, for various meetings with local and national officials.

“God brought me back to life from complete heart failure and death, in August 1977 for a purpose,” he declared to co-workers in an April 16, 1979, letter. “That purpose is to finish proclaiming His message around the world ….”

Now “back in harness,” as he termed it, he drove himself even harder than before in the fulfillment of Christ’s prophecy that the good news of the Kingdom of God would be preached in all the world as a witness in advance of His Second Coming (Matthew 24:14).

Did God answer his 1977 request for more years of life? Absolutely! Those remaining years were filled with greater vitality and drive, enabling the completion of the commission God had committed to him. During these additional years, God would open even more miraculous doors for preaching His gospel via public appearance campaigns and meetings with world leaders.

In June 1985, representatives of the world’s nations gathered in San Francisco to commemorate the 40th anniversary of the United Nations. Delegates reviewed 40 years of achievement and considered the future of the world organization. Herbert W. Armstrong had reported the 1945 conference for the Plain Truth magazine and World Tomorrow radio program. At the time of the 1985 conference he had met with more heads of state and leaders of government than any other man alive. He was afforded a position of honor and duly recognized by the delegates during the sessions of discussion and debate.

He died January 1986, approximately eight years and 11 months from the time of his February 1977 prayer. This example of faith and obedience to God recalls one of his most powerful publications: The Plain Truth About Healing.

For over two decades, our editor in chief, Gerald Flurry, has continued in the tradition of the very power and spirit of Mr. Armstrong’s example. He led an almost six year court battle over this book and many other works of Mr. Armstrong, which had been spurned by those who assumed control of the physical and spiritual assets with which God has so blessed His Work.

The Trumpet’s sponsor, the Philadelphia Church of God, won that legal battle out of the courts, and has continued vigorously to revive those works and publish them free for the asking. Request your copy of The Plain Truth About Healing without cost or obligation, and develop a personal relationship with the all-powerful God behind the miraculous answer to Herbert W. Armstrong’s righteous prayer.