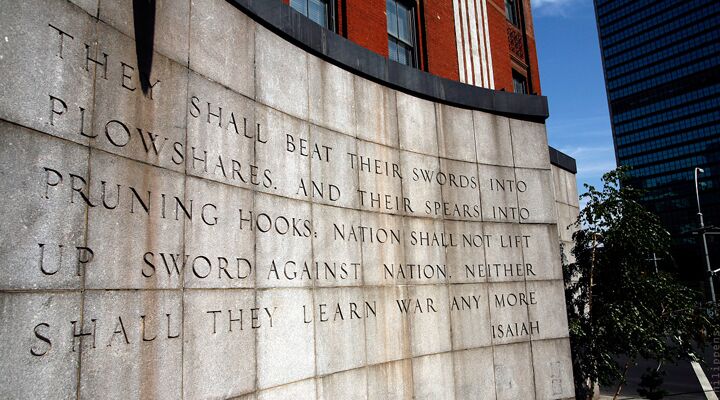 In June 1985, representatives of the world’s nations gathered in San Francisco to commemorate the 40th anniversary of the United Nations. Delegates reviewed 40 years of achievement and considered the future of the world organization. Herbert W. Armstrong had reported the 1945 conference for the Plain Truth magazine and World Tomorrow radio program. At the time of the 1985 conference he had met with more heads of state and leaders of government than any other man alive. He was afforded a position of honor and duly recognized by the delegates during the sessions of discussion and debate.

Then president of the UN General Assembly Paul Lusaka declared, “If you ask me what the United Nations needs most, more power or more money or both? My answer would be the United Nations needs above all the love, the understanding, the interest and support of the peoples of all nations.” U.S. Secretary of State George Schultz added, “The hardest thing for human beings to do is to set lofty goals and work hard for them while recognizing that they may never be fully realized. Yet this is what the United Nations is really all about. The failure of the United Nations to meet all its lofty aims is no cause for despair. We should continue to set high goals that aspire us to work harder and to persevere.”

“As one who has devotedly sat on the sidelines of the Security Council for nearly 40 years, perhaps I may be forgiven for saying that there are moments, or have been moments, and still are, when I feel that only an invasion from outer space is likely to reintroduce to the Security Council that spirit of unanimity and collegiate responsibility which the authors of the charter were talking about. I sincerely hope I may be proved to be wrong,” lamented UN Under Secretary General Brian Urquhart from the United Kingdom.

Only three of the original signers of the UN charter were alive at the time of the 1985 conference and were invited to attend the commemoration conference and speak to the delegates.

First was General Romulo, from the Philippines, who stated, “We who came together in those early days of the UN know that the most and certainly the best we could do at that time was to build the foundation. We can pride ourselves that the foundation is still intact, but the structure of a genuine peace is yet to be built. This is the continuing challenge for all those who understand that the human race cannot survive in a condition of world anarchy.”

“It’s not enough for young generations to say we do not want a nuclear war—that’s obvious. But if there is to be peacekeeping there must be peacemaking, and the United Nations needs a tremendous expansion in the way in which solutions are worked out and brought forward,” declared Harold Stassen of the United States.

Sitting in the front row, Herbert Armstrong listened to the third living original signer, Charles Malik of Lebanon, passionately tell delegates, “When we look ahead to the years of peace we find that distressingly little is being contemplated to be done in this conference in the realm of the mind and spirit. It is with the spirit and mind of man through his ideals and his attitudes that we must devote considerable attention if the peace is going to be truly won. Unless we secure the right conditions for spiritual and intellectual health and unless we determine the right positive ideals of which man should live I am afraid all our work in this conference may prove to have been in vain.”

After his speech, Dr. Malik privately discussed with Mr. Armstrong what he considered to be the missing dimension in the philosophy of the UN representatives:

There is an old wisdom in the Middle East with which we are fully acquainted. You know history began in the Middle East—I mean the history of the Western world began in the Middle East, in Mesopotamia and Egypt on the shores of Lebanon, with the Phoneticians then in Jerusalem and so forth. One of the basic things everybody believes in, everybody without exception, in every village in Lebanon, every village in Egypt, everywhere! …One of the important things we talk about is the devil! I’d like to see one man speak of the devil. The devil has penetrated human hearts everywhere. … So we believe that the devil is at work in the midst of all these events, and the devil is at work and has not yet been completely conquered, vanquished—we will not have peace. We will never have peace, we will never have peace. You think the right conditions are going to bring peace as long as the devil is around? We had a thousand people at lunch today—more than a thousand people, 1,500. I was sitting down and thinking all the time, Mr. Armstrong, all the time, what is going on in the minds of these people? I’m not sure the devil was there in the minds of these people. I’m not sure at all. With all their schemes and ideas and emotions and aspirations and plannings and all kinds of things. The devil is at work. So, I think if you ask anybody, any peasant in Lebanon or in Egypt will tell you, of course the devil is at work.

He went on to comment that the devil had concealed himself and conquered the minds of the UN delegates as evidenced that they “didn’t even dare speak of him.”

Today, those original signers of the UN charter are dead, and as Dr. Malik noted, few people realize that this is Satan’s world. A few months after this private meeting on the sidelines of the UN conference, Herbert Armstrong would release his final book, Mystery of the Ages, whose second chapter asked, “Could anything be more mysterious than the question of the unseen spirit world? Angelic beings have always been a mystery to people on the Earth. Do angels actually exist? Is there, in fact, a Satan the devil? Is Satan a literal, immortal being? Did God create a devil?”

As Satan’s rule on Earth draws nearer to the end, it becomes increasingly important for an ambassador of the Kingdom of God to reach many nations with the words of warning of tribulation and the promise of peace. There is a special urgency in reaching the nations of the industrial world. For it is these nations that prophecy reveals will trigger the crisis that catapults the human race into the final trial (Matthew 24:21-22). Finally, according to God’s prophecy, Satan will be removed for a thousand years as Jesus Christ ushers in prosperity for all via peace enforcement (Revelation 20:1-3). With the devil removed, peace will come to the previously blinded minds of man, as God’s sure word of prophecy is revealed to their opened minds.

Perhaps one of the most visionary statements at the 1985 conference came from Canadian UN Ambassador Stephen Lewis. “It is said, according to United Nations studies, that we have had 150 conventional wars since 1975, fought in 71 countries … with over 20 million people dead. It continues even at this moment in time at a measured loss of life of a thousand people a day, 30,000 a month ad infinitum. What would we do without the United Nations forum on arms control and disarmament? It is entirely possible that without it the doomsday clock would have already struck midnight. Perhaps we can meet here again in San Francisco 40 years from now, in the year 2025, and in the interim, because of the tireless work which is done, sanity may have intervened and we will then be at a conference discussing a convention on the control of the proliferation of plowshares and pruning hooks.”

The passage the ambassador referred to is from Isaiah 2 and is repeated in Micah 4. “And he shall judge among the nations, and shall rebuke many people: and they shall beat their swords into plowshares, and their spears into pruning hooks: nation shall not lift up sword against nation, neither shall they learn war any more” (Isaiah 2:4). In his booklet Isaiah’s End-Time Vision, our editor in chief commented on this famed passage: “This verse is on a plaque at the United Nations. But in 6,000 years of man’s history, those words have not even come close to being fulfilled! Only God will fulfill this verse—not man. War on this Earth is about to end forever! A beautiful, glorious world is about to burst on the scene. God will use those saints being called now to help create that glorious world!”

Herbert W. Armstrong knew this well, and had spent the years from 1967 to 1985 doggedly fulfilling the godly commission to preach the gospel of Christ around the world as a witness (Matthew 24:14). Evidence of this is irrefutable, as he was specially recognized at the UN’s 40th-anniversary conference as the individual who had met with more heads of state and leaders of government than any other man alive. He took to those world leaders the way of peace, a message of a coming law, government and way of give that will bring lasting peace—the Kingdom of God.

The UN conference yielded no permanent peaceful outcome in achieving the objective of Isaiah 2:4 and the “proliferation of plowshares and pruning hooks.” Conversely, only three months after attending the UN conference, Mr. Armstrong attended for the last time the largest annual peace convention on Earth—the Feast of Tabernacles (Leviticus 23:34-26). To learn more about God’s commanded holy days, request your free copy of Mr. Armstrong’s thought-provoking booklet Pagan Holidays or God’s Holy Days—Which?

There is a powerful lesson for all of us upon reflection on these two peace conferences this “unofficial ambassador for world peace” attended within the last six months of his action-packed 94 years.

Filled with the memories of personal interaction with world leaders and fresh from his special invitation to attend as an honored guest the 40th-anniversary celebration of the establishment of the UN, Mr. Armstrong labored one last time at the Feast of Tabernacles to fill the minds of members of the Church with God’s utopian vision of the World Tomorrow. This festival was and is truly one with an assured outcome of lasting peace for all nations (Revelation 11:15). Request your free copy of Mr. Armstrong’s booklet on this very subject, aptly titled The Wonderful World Tomorrow.

Twenty-seven years after his final attendance at the Feast of Tabernacles, this past week members of theTrumpet.com’s sponsor, the Philadelphia Church of God, gathered around the world in perpetuation of God’s scriptural command to continue the world’s longest-running conference on world peace. As with Herbert Armstrong, Gerald Flurry spoke in person and via satellite to attendees in all corners of the globe declaring the way of peace and the message of the soon-coming return of Christ and establishment of God’s family government—peace enforcement for all mankind. Together we memorialized a prophesied soon-coming time of peace and prosperity ushered in by God Himself where all mankind (Zechariah 14:16) will be attending a “conference discussing a convention on the control of the proliferation of plowshares and pruning hooks.”