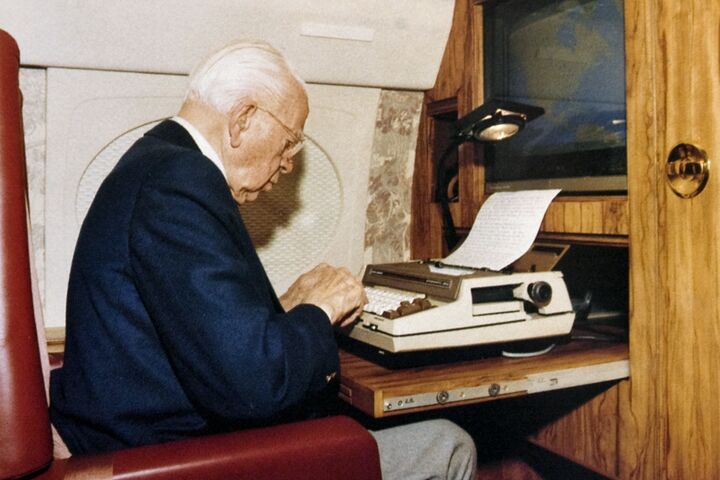 During the summer of 1977, after concluding meetings in Japan and Israel, Herbert W. Armstrong flew to the Ivory Coast on his first visit to what he termed “darkest Africa.”

His personal aide recalled, “He was not in the best of health during the trip, but I couldn’t persuade him to cut it short” (Stanley Rader, Against the Gates of Hell).

“We are having to spend the weekend at Abidjan, Republic of Ivory Coast,” Mr. Armstrong told readers in the Aug. 12, 1977, edition of the Bulletin.

He and his team found the French-speaking African west coast country the best fit for use as a regional base for public lectures organized for the neighboring English-speaking nations of Ghana and Liberia, a short 15-minute commuter flight away from Abidjan.

In the same article, Mr. Armstrong noted, “We will see the president and perhaps a few top officials here, but no public meetings due to the language barrier.”

While in Abidjan, Mr. Armstrong wrote extensively for various worldwide publications he had founded decades earlier. The Aug. 15, 1977, edition of the Worldwide News reported, “He also said he hoped to return to the Ivory Coast for evangelistic efforts there but would have to have a translator since the country is predominantly French speaking.”

At the time, he was unaware that this West African country would be the last nation to stamp his passport for 16 months.

For much of the 11½-hour flight back to the United States, Mr. Armstrong sat at his typewriter prolifically writing for various publications.

This selfless sacrifice is all the more noteworthy, as “he contracted a touch of what seemed to be intestinal flu,” the Worldwide News of Aug. 29, 1977 reported. The bout, it said, “gave him a fever which was aggravated by a stomach upset he contracted in Abidjan, Republic of Ivory Coast.”

The toll taken by this trip on Mr. Armstrong was to have a drastic effect on him, and ultimately a powerful effect on the direction of God’s work.

That August, shortly after returning from the Ivory Coast, Mr. Armstrong’s heart stopped beating, and he ceased breathing—the ambassador for world peace, without portfolio, lay lifeless for a brief moment in time.

His longtime friend and personal chauffeur Mel Olinger recalls, “I was running errands in town for him the day of the heart failure. I returned to his house some 20 to 30 minutes after the attack. Nurses said he stopped breathing for a minute and a half. Those of us there were all silently praying for God’s miraculous intervention.”

Then, dramatically, after being anointed (James 5:14) and receiving cpr, he was revived, his heart began beating, and he gasped again with the breath of life!

After over a year of bed-ridden recuperation amid a bevy of incessant writing, Mr. Armstrong flew to Jerusalem on Dec. 11, 1978, for various meetings with local and national officials.

“God brought me back to life from complete heart failure and death, in August 1977 for a purpose,” he declared to co-workers in an April 16, 1979, letter. “That purpose is to finish proclaiming His message around the world ….”

Now, “back in harness,” as he termed it, he drove himself even harder than before in the fulfillment of Christ’s prophecy so that the good news of the Kingdom of God would be preached in all the world as a witness in advance of His avowed Second Coming (Matthew 24:14).

It wouldn’t be until late 1982 that he returned to the Ivory Coast. Ironically, on this trip, “Abidjan was a rest stop and a very interesting one at that,” reported the Pastor General’s Report of November 8 that year.

Accompanying Mr. Armstrong was his news editor for the Plain Truth magazine. While on location, he noted, “The Ivory Coast is perhaps black Africa’s most successful nation. Its huge outpouring of coffee (world’s third-largest producer) generates considerable national income. Abidjan’s skyline is indeed quite impressive, as is the layout of the city itself, weaving its way around a series of coastal lagoons.”

The city acted as a base of recuperation for Mr. Armstrong and his entourage after crossing the U.S. east to west, visiting Bermuda and then refueling in the Cape Verde Islands, en route to meetings with officials and public lectures in Africa, Greece and Spain.

Perhaps some of our Trumpet subscribers in the Ivory Coast recall these visits of this unofficial ambassador for world peace.

Today, after a bloody civil war and amid political divisions, this beautiful West African country needs stability, needs hope, needs an injection of joy, needs the love of God’s law and His government, which yields true, lasting life and peace.

All this can only be truly found in the message Mr. Armstrong declared to world leaders during his powerful ministry. Our publication’s founder, Gerald Flurry, wrote in his latest and gripping work, The Way of Peace Restored Momentarily, “Look at the list of world leaders Herbert W. Armstrong came into contact with, and who responded warmly to him.

“They called him an ambassador for world peace. That is a miraculous understanding, when you realize that he had that kind of an impact on the leaders of this evil world. It is something I think we need to pay more attention to.”

The Trumpet continues to give the world the benefit of that legacy.

Are you paying “more attention” to this legacy? Do you recognize the documented historical record of this powerful witness to the way of peace? Is it motivating you to action in your life, daily applying the wisdom of a king to “seek peace and pursue it”? (Psalm 34:14). Will you read and heed Mr. Armstrong’s oft-quoted Christ-declared instruction to the multitude of world leaders to whom he witnessed in his lifetime, that “It is more blessed to give than to receive”? (Acts 20:35).

That’s the only sure way to personal peace of mind, peace with God and peace with fellow man.