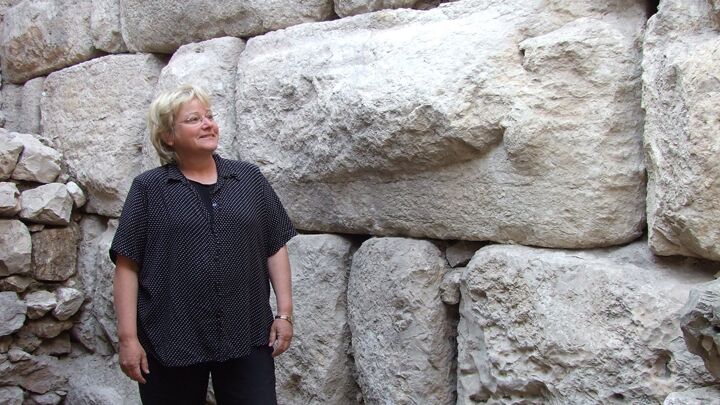 Every so often you meet someone who is consumed by a lifelong pursuit. For some it’s a focused zeal to become the best in their field, be it business, athletics or the arts. For others, it’s to make a scientific breakthrough that will change the world.

For Eilat Mazar, it’s to bring the ancient history of Jerusalem back to life.

No current archaeologist has brooded over the sites of ancient Jerusalem like Dr. Mazar. She excavated on the Temple Mount in the 1970s as a youth with her grandfather, the late Hebrew University president, Prof. Benjamin Mazar. She excavated with Dr. Yigal Shiloh on the City of David excavations while she was in her early 20s. She directed her own excavations at the palace of David beginning in 2005. She’s currently conducting a multiyear excavation on the Ophel. Dr. Mazar has spent decades of her life on this ancient hill of the City of David. No one’s hands have been so covered in that ancient dirt.

To have worked with Eilat Mazar for the past seven years is to have witnessed a heroic effort to uncover the remains of biblical kings that lie buried in ancient Jerusalem. She impresses me like few people have.

Eilat Mazar expresses a genuine interest for all diggers at the dig site.
The first time I met Dr. Mazar was in October 2006. I was in Jerusalem for the first time, volunteering on her dig as a college student. She greeted me with a big smile, introduced me to a few Hebrew words and quickly put me to work under the guidance of another archaeologist supervisor. At break time, she came over to me, a regular Joe on the dig, and started asking me all about my family and my life. At the time, I thought this was very out of the ordinary: the director of the excavations taking time out to express a genuine interest in me. Later, I witnessed that this is how she is with everybody.

Then there was the time toward the end of the 2006 excavation season where I was having trouble finding whether a certain layer touched up to a wall. Eilat, as she insists on being called, walked by. Seeing my baffled look, she asked if she could come and help. I gave her my trowel and she went to work with gusto. With every stroke of the trowel carving back the dirt, I sensed I was watching a master excavator at work. The confidence with which she dug made me realize the wealth of experience those hands had. It was as if she could see exactly what was under each shaving of soil. As she sent the dirt out in waves, I quickly bucketed it up. Fifteen minutes later, she had removed more earth than I had in an hour and, more importantly, found the answer: No, the layer did not touch the wall and therefore couldn’t be used to date the wall.

There was the time in the last week of that same excavation when I looked up from digging to find Eilat giving a group of people a tour. I recognized one of them as Dr. Israel Finkelstein, a well-known archaeologist and vocal dissenter of the history Eilat was uncovering. Yet here she was, giving him a personal tour of the excavation site while in progress. After, I asked Eilat why she opened up her precious dig site to someone who disagrees with her so strongly. She said it is not up to her to keep Jerusalem’s history to herself; it belongs to everyone.

There was also the time between the excavation seasons when I accompanied Eilat to an archaeological convention in Tel Aviv. She was releasing her recent discovery of Nehemiah’s wall to a standing-room-only crowd of hundreds of people. This event—a scholar from Hebrew University in Jerusalem walking into liberal Tel Aviv University—was as close as I’ve gotten to high-noon showdown in Dodge City. Immediately following Eilat’s presentation, the next professor got up; instead of using his time to show what he had discovered, he used all of it to discredit Dr. Mazar’s work. I was incensed at some of the preposterous claims. But she was unaffected, unperturbed, and determined to continue her work.

After a professor attempted to discredit Eilat’s work I was incensed at some of the preposterous claims. But she was unaffected, unperturbed, and determined to continue her work.
Then there was the time a few months later when Eilat released to the public a reading of an inscription found in her excavations. She read it as “Temech,” a family mentioned in the Bible that went with the Jews who returned from Babylonian exile during the Persian period. After a few more epigraphers viewed the inscription online, they wrote Dr. Mazar, saying that her reading was wrong. Instead of obstinately continuing to believe her theory, Dr. Mazar happily conceded, saying how wonderful the Internet can be as it unites scholars from around the world in helping the process of discovery. I’ve witnessed this type of intellectual honesty a number of times. While Eilat is stubbornly committed to her work, she is not stubbornly committed to her theories.

There was the time—actually many times during the latest phase of excavation—when I arrived for work at the normal time of 6:30 a.m. and found Eilat wearing a safety vest and walkie-talkie directing the flow of morning traffic. She had been at the dig site since 5:15 to oversee the crane and skeleton crew removing the massive sacks of earth from the previous day’s digging. Traffic in Jerusalem is so congested that the crane has to be off the street by 6:30. (We once made a game of timing the most prolonged car horn blast—it was over a minute.) At a time when most people aren’t awake, the head of the excavation thought nothing of pulling traffic duty.

There were the many times when we would leave the dig site together in her car, crawling through the epic congestion of Silwan, the predominantly Arab village that sits on the location of the ancient City of David. Every time we came to a stop for a brief moment, she’d be talking out her rolled-down window to some local as he walked past, or yelling to another as he sipped his Turkish coffee from a rooftop overlooking the road. At first I thought she was just being friendly with strangers. But then I overheard them calling her Eilat. Whether Arab or Jew, these City of David inhabitants all knew her. What amazed me further is that she knew them: She had worked with many of them or their family members over decades of excavation on that same hill. In this most volatile neighborhood on the planet, here was one lady who had the respect of them all.

Then there was the time when I was up late one night working on some post-excavation work. When I was finished, I e-mailed her the file and went to bed. The next day at work she lightly scolded me, telling me that I needed to get more sleep and not stay up that late working. Checking my e-mail when I got home, I noticed that she had replied to my e-mail. The time stamp of her reply was just after I had sent it—in the middle of the night. It seems that only she is allowed to work late into the evening, not one of her staff.

Eilat has only two priorities in her life: her work and her family.
Then there was the time, just a month ago, when I was talking to her eldest son over a beer in Jerusalem. I told him how impressed I was with his mother’s unrelenting effort in the face of all the difficulties and criticisms over the years. I expected to catch some slight sense of “Here’s another person going on about my famous mother” in him. Instead, he responded with unvarnished ex-Israeli army resoluteness: “She is amazing!”

Eilat has only two priorities in her life: her work and her family. That is literally all she has time for. Thankfully, when you participate in her work with her, you become her family.

This is the brilliant, experienced, intellectually tough-but-honest, hard-working, yet unpretentious, unprejudiced and downright motherly archaeologist who has produced many amazing discoveries coming out of Jerusalem. Along with her use of the Bible as a manual of history, this is the character behind the discovery of David’s palace, Solomon’s construction and Nehemiah’s wall.

For me it has been an honor to be part of those discoveries, and also a privilege to work with the woman whose character made them possible.