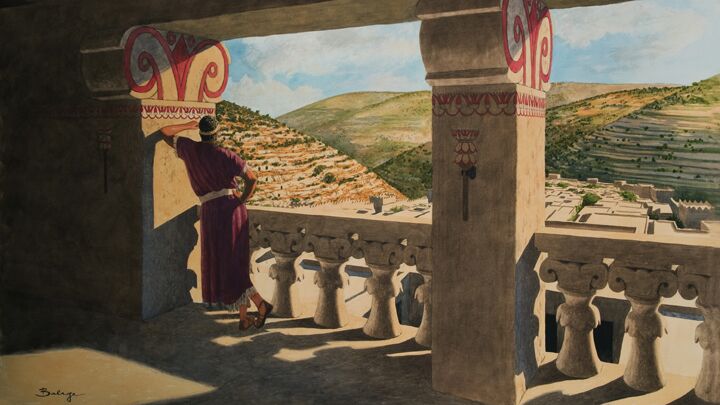 Critics have long contended that the Bible is an unreliable source of history. That it is loaded with exaggeration, legend and fable, inflating the importance of Israel’s past.

One particular source of scorn is the fantastic descriptions of the golden age of Israel’s monarchy, the reigns of King David and King Solomon. Revisionist historians claim the account overstates the significance of their rule.

In 2005, however, in what many archaeologists called “the find of the century,” something was unearthed that brought fresh credence to the scriptural narrative. And intriguingly enough, it was a respect for the Bible that precipitated the discovery.

What the Bible Says

King David was the 10th-century b.c. poet-warrior and slayer of Goliath whom the Bible says consolidated and expanded the ancient Israelite kingdom into a regional power. In about 1000 b.c., King David conquered Jerusalem and made it his capital.

The biblical account of this conquest is noteworthy. Before David established Israel’s capital there, Jerusalem was a Jebusite stronghold (Joshua 15:8). David ruled for seven years in Hebron before attacking this enemy fortress at the heart of Israel’s territory. The Jebusites were so certain they could defend against David’s attack that they taunted the young king—boasting that even the blind and lame could defend the city (2 Samuel 5:6). David offered the reward of command of the field armies to whoever could capture the stronghold. Joab seized the opportunity. He led a sneak attack by climbing up into the fortified city through a water conduit, resulting in its capture (verses 7-8; article, page 12).

The account continues: “So David dwelt in the fort, and called it the city of David. And David built round about from Millo and inward. And David went on, and grew great, and the Lord God of hosts was with him” (verses 9-10). Thus the kingdom of Israel, under David’s reign, became a regional power, according to the Bible.

At that point, Scripture describes David’s palace being built—by workers sent by the Phoenician king of Tyre as a gesture of friendship (verse 11).

Another detail worth noting in the passage comes in verse 17: “But when the Philistines heard that they had anointed David king over Israel, all the Philistines came up to seek David; and David heard of it, and went down to the [strong]hold”—or, the fortress. This verse in particular had a profound impact on Eilat Mazar of Hebrew University.

“Where was David coming down from?” Dr. Mazar asked, with 2 Samuel 5:17 in mind. She reasoned that he must have come down from his palace—which was situated on top of the hill, just outside of the original Jebusite city.

Many archaeologists had assumed that David’s palace must have been located within the walled city. But why would the king of Israel build his royal palace inside the cramped city walls of the old Jebusite fortress, Mazar wondered. The old city was only about 9 square acres. Relying on the history recorded in 2 Samuel, however, the location of the palace to the north made sense: Once David heard about the Philistines’ approach, he left his palace at the peak of Mount Zion and “went down” to the stronghold, or entered the walled city.

With this Bible-based theory in mind, Dr. Mazar started digging immediately north of the City of David, right at the top of Mount Zion. And after just one season of digging, she discovered a massive wall—up to 10 feet wide in some places, and running 100 feet long, east to west.

Below the walls, Mazar first found 11th-century b.c. pottery. Then, inside a room above the 11th-century b.c. fill, her team located 10th-century pottery—dating to the time of King David and free from material from any other period.

The following season of excavation, Dr. Mazar expanded the dig site, discovering a much larger wall over 16 feet wide, testifying of the building’s importance and grandeur. As she put it, this was “not just a house, but a fantastic house.”

A house—you could say—fit for the king of a mighty nation. Just like the Bible said. And in the location the biblical account suggested.

Dr. Mazar believes that only 20 percent of the palace has been uncovered. Plans are underway for further excavation in the near future.