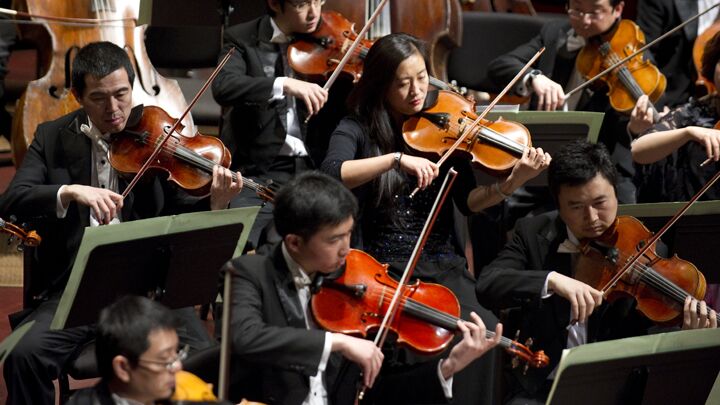 A blazing pink-and-orange prairie sunset. The sun shining on a high wall of glass behind the shadows of towering pillars. Colors refracting in giant crystal chandeliers. Small groups humming with conversation, melting into the buzzing crowd. Seats filling. Theater lights dimming. The audience hushing. The curtain opening. That first note.

This is a concert at Armstrong Auditorium.

And it is why the finest structure at Philadelphia Church of God headquarters—standing right next to the Trumpet offices—is an auditorium.

Armstrong Auditorium opened its doors in 2010 as the new home of the Armstrong International Cultural Foundation concert series. The hall has already welcomed scores of performers and visitors for dozens of performances. Inside, thousands of concertgoers have heard the flutter of the flute, the tinkling spectrum of the piano, the earnestness of the violin, the mesmeric chords of the harp, the warm reverberation of the cello, the resonance of the wind quintet, the lavishness of the orchestra and the splendor of the human voice.

Foundation chairman Gerald Flurry emphasizes classical music in the concert series because it combines several noble, admirable and exemplary qualities into one experience. It starts with history’s most gifted, most trained, most elite composers, who poured their brilliant minds and their lives into fashioning each detail of each piece of music. Their compositions are layered with intellectually challenging complexity: the deeper you go, the more there is to discover. Yet, at the same time, the music communicates something universal, meaningful, emotional. The classical concert takes this composition and hands it to the contemporary musician who has spent his life exerting his mind to train, work, persevere and overcome in order to convey the piece to the listener and, on top of that, add his own interpretation, his own passion, his own heart to the music. The Armstrong International Cultural Foundation brings a taste of this marriage of excellence and passion to Armstrong Auditorium.

But this fervency and quality also blossom in other forms of music. That’s why classical music forms the core, but not the whole, of the performing arts series. Armstrong has hosted many other high forms of music: the cultural kaleidoscope of the Bayanihan Philippine National Dance Company, the exuberance and expertise of the 5 Browns, the poised splendor of the Russian National Ballet Theatre, the familial genius of the Romeros Guitar Quartet, the popularity of Doc Severinsen and His Big Band, the high energy of StepCrew, the folk mastery of Mark O’Connor, the rich lyricism of Jubilant Sykes, the dynamism of Nathan Gunn, the nationalistic nobility of the Band of Scots Guards and The Black Watch, and the Latin-flavored mixture of humor and virtuosity of the Assad Brothers and Paquita d’Rivera.

In the process, concertgoers and staff have also experienced interacting offstage with men and women who represent countries all over the world, as well as high levels of talent, education, discipline, skill, culture and character. Some of the performers, like Broadway star Brian Stokes Mitchell, have hosted public master classes at Herbert W. Armstrong College. Sometimes, like with the Branford Marsalis Quartet, the Chieftains, the Byron Berline Band, Jubilant Sykes, the Eroica Trio and others, students and faculty from the college and Imperial Academy have even taken the stage alongside the greats for a number or two. They’ve also put together numerous concerts and productions of their own.

It’s certainly about something much higher than money, since the pcg subsidizes 50 percent or more of each concert. It’s about the human spirit.

Physically, human beings are similar to all the other creatures on Earth. Yet we are undeniably different. We learn, we speak, we sing, we dance—we write literature, we make discoveries, we do business, we have families, we love and so much more. Why? Because each of us has something special—it’s the human brain plus the human spirit. It’s the incredible human mind.

The astonishing, spirit-powered human minds God gave us are capable of choosing great evil. Every day we prove that fact. We overwhelmingly choose to follow Satan’s selfish way of life, twisting our minds into warped and even horrific misuses. The Trumpet message is a warning against those sins.

But Armstrong Auditorium’s message is hope. It celebrates the greatness of the human spirit as God created it. It celebrates the fact that the power, the capacity, the beauty of each human being is ongoing evidence of our virtuosic Creator! We are bright and beautiful creations of our loving Father. He allows us to make our own decisions and learn the hard way, but His masterwork is underway right now: a design that will ultimately redeem the vast majority of mankind!

The Armstrong Auditorium concert is simply a glimpse into that spectacular future. It’s a preview to a time when Jesus Christ will return and will put down all rebellion, all our perverted misuses of the human spirit. It’s a preview of a happy, abundant, innovative, brilliant utopia that will bloom under His rule—where each person uses his or her God-given human mind the right way, to help make the world a paradise of peace, progress, joy and fulfillment. It’s the way we were created to be. And it’s coming. We call it the wonderful World Tomorrow.

In the meantime, in the world today, there is hope.

As it blasts the warning through the Trumpet, the pcg continues to announce this message of hope. Armstrong Auditorium will do its part to enhance that message in October with its 2013-2014 performing arts season. Once again, audiences will unite with performing artists from around the world inside the universal joy of music, sharing precious moments when we are not Germans, Americans, Filipinos, Hungarians, Britons, Russians or Israelis, but when we are all children of God joining together in His creative masterpiece of sound.

Sidebar: Who is the PCG?

The Philadelphia Church of God publishes the Trumpet newsmagazine and theTrumpet.com. It also supports other activities, including numerous publications, a television program, a youth camp, a K-12 school, a liberal arts college, and congregations around the world. It sponsors the Armstrong International Cultural Foundation, which hosts an archaeological dig in Jerusalem and a concert series in Armstrong Auditorium.