The catch to the Mars One project 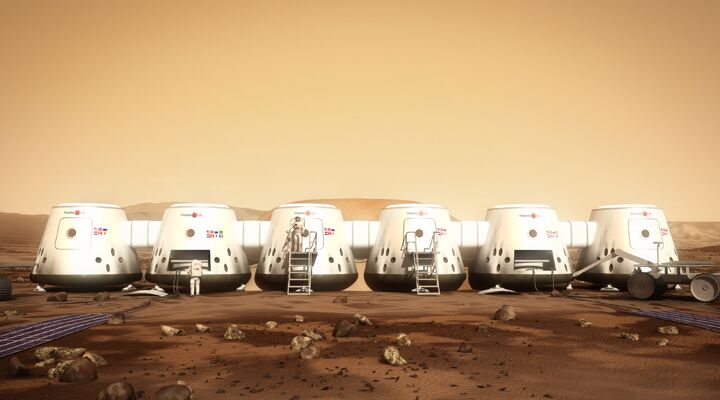 The catch to the Mars One project

A project called Mars One kicked off a mission in June 2012 to build the first human settlement on planet Mars. The private spaceflight project plans to land four people on the Red Planet in 2023, and send four more every two years thereafter.

But there is a catch.

Back in 2009, nasa scrapped its plans for a manned Mars mission largely because the cost of sending a crew there and back, and sustaining them while there, was projected to be $100 billion. In an economic climate in which even key military operations are increasingly viewed as unsustainable luxuries, the expense made nasa’s plans impossible. So, how can Mars One boldly go where nasa couldn’t afford to?

Mars One includes no return-trip ticket. Once the spacecraft transports the crew to Mars, a segment of it would connect to a prebuilt habitat (sent by earlier unmanned launches), and become the permanent home of the new settlers. The dwelling plans include systems for generating energy, water and breathable air from Martian resources. The settlers would spend the rest of their lives in the tiny colony, with no chance of ever returning to Earth.

Because of that, Mars One’s mission is expected to cost only $6 billion. And rather than relying on elusive government funding as nasa did, a key component of Mars One is a reality tv show with an audience vote that determines which applicants will ultimately get the nod. From the moment the candidates are selected, they will be celebrities. Their training, flight and new lives on Mars will all be thoroughly documented—and generate premium advertising revenues.

On April 22, the Dutch project began accepting applications from people seeking to become an astronaut/colonist. The fact that the candidates would never return to Earth made planners, sponsors and analysts wonder if many people would apply.

Within two weeks, they had received 78,000 applications from 120 nations, making it the most applied-for job in history.

Mars One co-founder Bas Lansdorp was stunned. “The fact that we are already at such a significant level in just two weeks’ time surprised us positively.” Lansdorp said they hope to attract a total of half a million applicants before the deadline.

Why are so many people eager to leave Earth forever and live out their lives in the most spartan of circumstances on Mars?

The earliest chapters of history show that mankind has a deep urge to thrust beyond what is known and discover new domains. Man’s restless spirit has pushed us to the highest peaks and the deepest ocean depths; sailing to the planet’s every corner and then soaring off Earth altogether. Fame, adventure, escape and other considerations factor into the allure of Mars One and other exploration opportunities.

In the case of clamoring for a one-way ticket to colonize Mars, there may be another motivation at work. As the late Ray Browne, an author and retired professor, said about the subject nearly a decade ago, “I suspect that the obsession—if that’s what it is—is a kind of subterranean fear that things are going to get too hot down here, so now is the time to look for that Shangri-La. And if we just get up there, a few of us, we’ll escape all the trouble that we’re having down here.”

It’s an intriguing notion. Anyone can recognize “all the trouble” here on Earth. But would migrating to another planet truly escape it? The Bible has an answer.

Astoundingly, Scripture shows that God wants and intends mankind to move out onto Mars and beyond. “For thus saith the Lord that created the heavens; God himself that formed the earth … he created it not in vain, he formed it to be inhabited” (Isaiah 45:18). This jaw-dropping verse, alongside several other scriptures, reveals that God did not create the vast universe just to be an ornament to be observed from Earth: He designed it to be inhabited!

Hebrews 2:6-10 say God will put “all things” (Moffatt, “the universe”) in subjection to man. But then the passage acknowledges that He hasn’t done so yet.

There is a very good reason He hasn’t. God gave us Earth to care for—and look around: “All the trouble” shows that we aren’t yet capable of successfully governing ourselves. If mankind was somehow able to populate another planet, we would bring “all the trouble” with us.

But God has an inspiring plan for changing and healing the human nature that creates so many problems. Once He accomplishes this, then man will be able to fulfill the true potential God has given us.

If Mars One gets off the ground—and that is a big if—only a tiny handful of the half a million expected applicants will be accepted. But each of those people—and the vast majority of all men who have ever lived—have the potential to go far beyond Mars, and to inhabit the whole universe!