By Andrew Miiller and Robert Morley 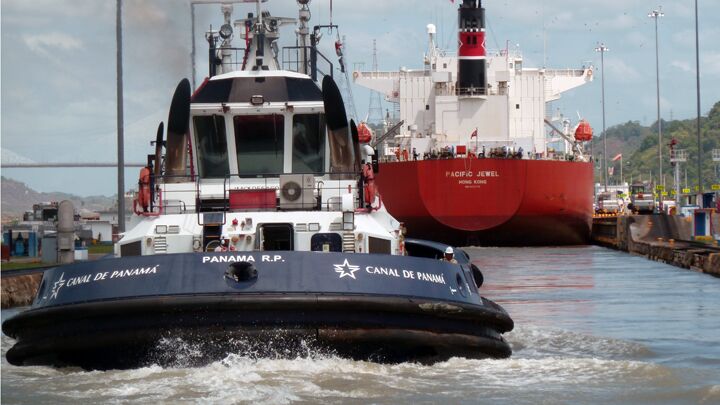 By Andrew Miiller and Robert Morley

It is one of the most astonishing success stories in history. At one time, the English-speaking peoples of Britain and America controlled two thirds of the world’s agriculturally productive land. And, impressive as their landholdings were, their maritime reach was even more astounding.

These two powers controlled virtually every important oceanic choke point and sea gate on the planet. Oceanic trade and sea communication only existed to the extent that Britain and America allowed it. This domination of global trade turned these two peoples into economic superpowers.

Massive port cities like Hong Kong, Port Said, Quebec City and Calcutta—river gateways to entire countries and continents—all flew the Union Jack. New Orleans flew the other red, white and blue. From these cities and many others, goods from almost a quarter of the world’s population traveled to markets around the world. It was British and American ships carrying those goods too.

Control of these ports meant mastery of the world’s shipping lanes. British and American guns commanded both ends of the Mediterranean Sea, as well as the Panama Canal, the Strait of Malacca, Cape Horn and the Cape of Good Hope, in addition to the best natural and strategically placed naval harbors in the world.

Never have so few people controlled the destiny of so many.

How did these two nations grow to dominate global trade to such an astounding extent? The book The United States and Britain in Prophecy explains why America and Britain rocketed from insignificant nations to global superpowers. As Herbert W. Armstrong explained in his book, it all began with a promise made to the ancient patriarch Abraham in which God promised to give his descendants control of the “gates” of their enemies (Genesis 22:17). God gave Britain and America these commercial gates, virtually ensuring that they would become economic and military superpowers.

But God also warned that if America and Britain did not obey Him, then not only would those sea gates be taken away, but they would be used against these nations (Deuteronomy 28:52).

The maps on the following pages depict the amazing extent of British and American power at one time—and then show how much of it has been lost. The fulfillment of this latter prophecy is a telling indicator of where the U.S. and Britain are heading.

Britain annexed Malta in 1814 as part of the Treaty of Paris, ending the Napoleonic Wars. After annexation, Malta served as the headquarters of Britain’s Mediterranean fleet. The island was vital to British success in the Mediterranean during World War II—King George VI even awarded the George Cross to the Maltese people collectively. Britain granted Malta political independence in 1964.The last remaining British troops withdrew in 1979.

Malta is now a member of the European Union and the eurozone. Germany is dominating the EU, and Malta is swiftly becoming a German vassal state.

After the Rock of Gibraltar was ceded to Britain in 1713 as part of the peace terms ending the War of the Spanish Succession, Britain erected a formidable military garrison for the strait’s defense. The garrison played a strategic role in the Napoleonic Wars, the Crimean War, World War I and World War II. Spain has tried to claim Gibraltar more than once, but the people of the province voted to remain under British rule in 1967 and 2002.

Since the Spanish government is still pushing for full control of this sea gate, it seems unlikely Britain will be able to keep it much longer.

10 percent of global trade passing through Gibraltar each year

106,000 ships passing through the strait annually, including 5,000 oil tankers

British influence in the Niger region increased over the course of the 19th century until Nigeria became an official British colony in 1900. The colony in Nigeria allowed Britain to suppress radical Islamist movements in West Africa and to keep the Gulf of Guinea free from pirates. After Nigerian independence in 1960, however, Britain’s global power began to decline, and the United States had to start taking on more maritime policing responsibilities.

The U.S. Navy’s failure to keep the waterways safe has allowed pirates to threaten the region, a fact not lost on the leaders of China or Germany, which are developing military ties with Nigeria.

The Union of South Africa brought the cape under the executive power of a governor-general representing the British Crown in 1909. The Cape Town Naval Base became significant during World War II, when South African Prime Minister Jan Smuts went about fortifying South Africa against a possible German invasion.

The surrender of South Africa to the Communist influenced African National Congress ended much of Britain’s control over the Cape of Good Hope in 1994.

3,400 ships that come into the Port of Cape Town each year, laden with 4 million tons of cargo

Although this strait has never been under direct British or American control, the British Empire was able to project naval power into this area when Pakistan was part of British India. After Pakistani independence in 1947, Britain and America had to rely solely on their relationship with Arabic states to secure this sea lane.

Now that Iran is rising as a dominant power in the Middle East, the security of Hormuz is being called ever more into question.

26 number of crude oil tankers that pass eastbound through the strait each day, moving 17 million barrels of oil

From 1888 to 1960, this strategic sea gate, along with the entire Gulf of Aden, was protected by the British Navy operating for the British Somaliland protectorate. Control of this gate was vital to Britain’s struggle against the radical Islamist leader Sayyid Mohammed Abdullah Hassan in 1913. British Somaliland was granted independence in 1960. Since then, British Somaliland has joined the Somali Republic and become an Islamic state.

For the past decade, the coast of Somalia has been plagued by pirates while the mainland struggles against the Iranian backed al-Shabaab terrorist militia. Iran’s military strategy includes gaining control over this gate.

30 percent of hydrocarbon trade that passes through the strait

8 percent of overall seaborne trade that passes through the strait

The Canal Zone was declared a neutral zone under the protection of the British at the Convention of Constantinople in 1888. British control of the Suez Canal gave the Allied powers a strategic advantage in World Wars I and II. British troops guarded the Canal Zone up until 1956, when Egyptian strongman Gamul Abdul Nasser nationalized the area.

Today, the Suez Canal is under the power of a Muslim- Brotherhood-dominated Egyptian coalition. This coalition’s growing alliance with Iran means that the canal could soon be closed in an attack on the West.

35 thousands of ships that transit the canal each year, including 3,500 oil tankers

8 percent of overall seaborne trade that transits the canal annually

Under the terms of the Convention for the Extension of Hong Kong Territory, Britain obtained a 99-year lease of Lantau Island and the adjacent northern lands from mainland China in 1898. Even though the government of China was displaced in a Communist coup in 1949, Britain still gifted this South China Sea prize to the People’s Republic of China in 1997.

456,000 vessels that moor in the harbor every year

Great Britain seized control of Trincomalee from the Netherlands in 1795, fearing that its alliance with France would give the French Empire control of Indian Ocean trade routes. During World War II, the port harbored the British Seventh Fleet and proved to be an invaluable asset after London lost the Singapore Naval Base to Japan in 1942. This strategic gateway was completely lost to Britain after London relinquished control of the Port of Trincomalee to a newly independent Sri Lanka in 1957.

The Sri Lankan government is now being courted by Chinese leaders who would like to see the island as a strategic asset in their “String of Pearls” strategy to control the Indian Ocean.

Thomas Raffles signed a treaty with Sultan Hussein Shah on behalf of the East India Company in 1819, which allowed Singapore to be developed as a British trading post. The British voluntarily gave up this most strategic sea gate in 1965 when Singapore withdrew from the British-backed Malaysian Federation to declare independence.

China is now reaching out to Singapore in an effort to cement control of the Strait. Singapore now maintains first position among asean countries as a Chinese trade partner.

35 percent of all seaborne goods that pass through the strait

50 percent of the world’s merchant fleet (60,000 ships) that sails through Malacca

50 percent of all petroleum goods that pass through Malacca

Along with Clark Air Base, Subic Bay Naval Base once represented the largest overseas military installation of the United States Armed Forces. It fulfilled a vital role in World War II and the Vietnam War. The Filipino government ordered the U.S. to withdraw from the area in 1992. The withdrawal ended a vast American military presence in the Philippines that began when the U.S. captured the islands from Spain during the Spanish-American War in 1898.

Now that U.S. military presence in the area has been drastically reduced, China is claiming the entire South China Sea for its own.

The 10-mile-wide Panama Canal Zone has been called the “birth canal” of American greatness. Its construction in 1914 allowed the United States to become a global power. Control of the Panama Canal Zone gave the Allies an advantage in World War II when Nazi Germany sent U-boats to the Caribbean to cut off American oil supplies. When U.S. President Bill Clinton surrendered the canal back to the government of Panama, an era of American greatness came to an end.

A Chinese company now runs both ports on each end of the Panama Canal Zone. Germany is courting Panama itself as a potential user of the euro currency.

5 percent of global seaborne trade that passes through the canal

British Captain John Byron explored and claimed Saunders Island in 1765. The British Empire did not establish a permanent naval presence in the Falklands until 1834. This naval base proved vital to British interests in World War I when the Royal Navy fought to keep Germany’s East Asia Squadron from passing Cape Horn.

Argentina is ramping up pressure on Britain to relinquish the islands and recently passed a law that prohibits British ships from docking in any ports located in the Buenos Aires province.