More than ever, our sons need a masculine example to look to. Here is the best. 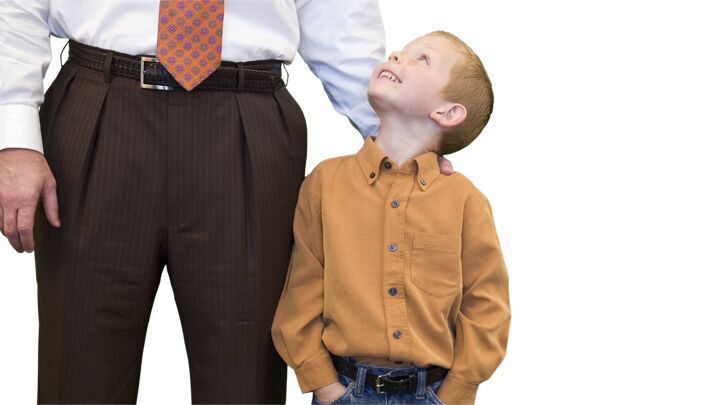 More than ever, our sons need a masculine example to look to. Here is the best.

Two hundred years ago, the father’s role was clearly defined. He was at the center of family life. He was the head, the primary caregiver, breadwinner, protector, moral educator and law-enforcer.

Today, assuming the father is even present, you would be hard-pressed to find one who fulfills even two of those responsibilities. The modern father has relinquished his duties and abdicated his God-given role as the loving head of his home. Today, boys grow up not knowing what role to fulfill, if any. Our boys are in trouble!

The only solution is to get back to the wisdom of the Bible.

An excellent definition of godly masculinity is summed up in the way Carl Sandburg described Abraham Lincoln—as a man of steel and velvet. The 16th president was a powerful and persuasive speaker, a man of valor and strength. He was a mighty man of war who faced down forces of evil and preserved the union of the American nation.

And yet, Lincoln was a man of peace. He was merciful, kind, gentle, thoughtful, friendly, patient and humble. He was neither feminine nor domineering. He was a real man—a man of steel and velvet.

One man fulfilled that description far better: Jesus Christ. Artists have portrayed Christ as a skinny, soft-spoken, long-haired, effeminate wimp who died of a broken heart. How deceived this world is!

The Bible says that it is shameful for a man to have long hair and that effeminate men won’t even be in God’s Kingdom (1 Corinthians 11:14; 6:9).

Jesus was not what you might think. He was a real man. Physically, He was a man of impressive strength and endurance. Before His ministry began at age 30, He worked hard as a carpenter (Mark 6:3) and observed all the physical laws of good health (Hebrews 4:15). During His ministry, He walked from city to city through mountainous terrain—sometimes traveling many miles in one day. Prior to being tempted of the devil, Jesus went without food and water for 40 days—something no frail weakling could ever endure. Before His crucifixion, Jesus was brutally beaten (John 19:1) and then nailed to a stake with iron spikes. Yet, having led such a robust and healthy lifestyle, He lived through what would have easily killed the average man. He survived until a Roman soldier finally thrust a spear into His side.

Artists who paint portraits of Jesus must not have read John 2, where Jesus confronted moneychangers in the temple. When He saw shady transactions going on inside God’s house, Jesus took a handful of ropes and whipped the livestock right out. He kicked over tables and chairs and threw money all over the floor. His deep voice bellowed through the halls: “Get out of God’s house, and take all of your belongings!” This was at the very beginning of His ministry, when few even knew who this man was (read verse 18)—yet these Jews were too fearful to challenge this strapping and righteously indignant young man.

Imagine that same scene with the melancholy, wimpy Jesus from the pictures and movies. Hard to do, isn’t it? The real Jesus was nothing like what most people imagine!

No one knows just what Jesus looked like, but reading the Bible shows that He was a muscular man of perfect health and enduring strength.

Physical fitness is only a fraction of what godly masculinity is all about, though. Jesus was a learned man who took His education seriously as a youngster. When He was a boy, He walked into the temple at Jerusalem and discussed the truth of God with the most educated theologians. Luke 2:47 says that all who heard Him were “astonished at his understanding and answers.” They were amazed by how much this 12-year-old understood! As Jesus grew up, He increased in wisdom and stature (verse 52). His education never ended.

By the time His ministry began, Jesus had developed into perhaps the finest and most persuasive speaker in mankind’s history. Those who heard Him were astounded, and those who hadn’t heard Him traveled a long way so they could. People who knew Him as a child couldn’t believe how eloquently this Jewish carpenter could speak. When He finished speaking, He often tried to withdraw for a quiet moment, yet throngs of people would sometimes track Him down (Luke 4:42).

Jesus also had a commanding presence. His doctrine astonished the masses, because He “taught them as one having authority” (Matthew 7:29). Jewish authorities coveted his popularity. Pilate, who oversaw Christ’s execution, even acknowledged that Jesus was a just man who spoke the truth (Matthew 27:24).

The Other Side of Manliness

Together with steel-like traits of vibrant health, intelligence, decisive leadership, righteous indignation and powerful persuasiveness, Jesus also exhibited many velvet qualities. Above all, He was humble. Publicans and Pharisees criticized Him for spending time with sinners, but He knew that the sick are the ones who need the physician (Luke 5:31-32). The Lord and Master of the disciples instituted an ordinance of humility at His final Passover and washed their feet (John 13:13). He was their Lord and Master, to be sure—but that just meant He was to serve those under Him all the more. He taught that those who serve the most will receive the highest positions in God’s Kingdom. We can see then why Jesus, the most humble servant who ever walked this Earth, qualified to be King in God’s Kingdom.

Jesus was also a compassionate man. No matter how busy He was or how crowded the scene, Christ always seemed to make time for the disadvantaged. Christ once left Jericho with a great multitude, and two blind men cried out for Him to have mercy on them. The multitude ridiculed them, but Jesus stopped to help them. “So Jesus had compassion on them, and touched their eyes: and immediately their eyes received sight, and they followed him” (Matthew 20:34).

This genuine compassion for others even caused Christ to weep on occasion. In the case of Lazarus, Jesus cried because of the people’s lack of faith (John 11:32-43).

The gentleness of Jesus is reflected in how He treated children. In Mark 10, after some adults pressed to have Jesus lay hands on their little ones, His own disciples rebuked the parents. But He rebuked the disciples, saying that we must all become as little children to enter God’s Kingdom; then He took these children up in His arms and blessed them.

This same kindness is what drew so many women toward Christ—some even wept at His feet. At Jacob’s well, Jesus asked a Samaritan for water. She was taken aback, since other Jews wouldn’t even speak to Samaritans. Christ discerned that this woman was involved in an adulterous relationship; the way He dealt with her evidently prompted her to repent of that wickedness and to support Christ’s work (John 4:28-30).

This is how quickly Jesus forgave people who showed fruits of repentance. Another time, scribes and Pharisees were about to stone a woman caught in the act of adultery. But Jesus intervened to prick everyone’s conscience: “He that is without sin among you, let him first cast a stone at her” (John 8:7). After everyone left, He told the woman to go and sin no more.

Jesus Christ was the epitome of true masculinity. He wasn’t all steel—lording His authority over people. Neither was He all velvet—weak and effeminate, standing for nothing. He was both steel and velvet: strong, bold, courageous, gentle, patient and meek. This godly form of masculinity drew many men, women and children to Him.

The Bible tells us much about what kind of man Jesus was—the kind of man all men should become. Little is recorded about His younger years. Yet there is enough for us to know that, as a boy, Jesus obeyed His parents, Joseph and Mary, and developed an intimate relationship with His spiritual Father in heaven (Luke 2:51-52). The mere fact that Christ began His ministry at the relatively young age of 30 reveals what kind of character He had as a boy, a teenager and a young adult.

Jesus Christ’s spiritual Father and His physical parents taught Him how to be a man.

That might sound hopelessly ideal. But we must understand that it is the only real solution to what is happening to our society. This is what is missing from today’s debates over how boys ought to be reared.

Many commentators have their so-called solutions. Some want to soften boys even further and would never tolerate them leading their wives and children as the head of the home. Some think boys ought to be macho, looking down on women, and won’t stand for boys being compassionate, merciful, unselfish and kind. What confusion.

The problems with our boys will never improve until we put God back at the center of family life!

Read Deuteronomy 6 and see how serious God is about parents teaching little boys how to be masculine men—and girls, for that matter, how to be feminine women. God says we ought to diligently teach our children all His ways, when we talk with them, sit with them, walk with them, when we wake up in the morning and when we go to bed at night (verse 7). What an effect it would have on our children, even now in this sinful generation, if parents would accept full responsibility for their children’s upbringing and raise them the way God says to!