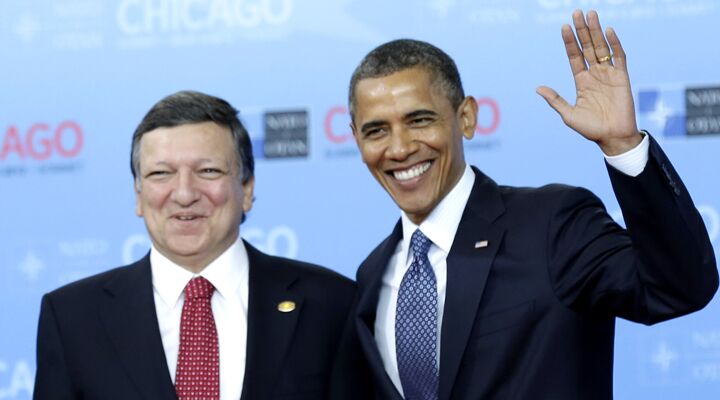 The United States is abandoning Britain in favor of a new friend—the European Union.

British Euroskeptics have long dreamed of leaving the European Union and forming a new relationship with the Commonwealth and the United States. Unlike the EU, this alliance would share Britain’s fundamental values—their laws flow from the same tradition. It would be a trade alliance that would benefit all involved.

The problem is, America’s not interested. It’s more pro-European than most of Europe is.

America’s response to Britain’s growing Euroskepticism shows that it views Britain as a bridge to Europe, rather than an important ally in its own right. If Britain leaves the EU, its usefulness to America is over.

The UK Independence Party is growing in popularity. Prime Minister David Cameron recently said that a British EU exit was “imaginable.” Faced with this shift, U.S. President Barack Obama himself is reportedly lobbying Cameron to keep Britain in.

The Telegraph’s diplomatic correspondent Alex Spillius reported that “the issue was raised by President Barack Obama in a video-conference call with the prime minister” on December 18.

American diplomats are also raising the issue. “It is important to state very clearly that a strong UK in a strong Europe is in America’s national interest,” Spillius reported a “senior U.S. administration official” as saying.

The sheer hypocrisy of a nation formed because it didn’t want foreign control over its affairs (no taxation without representation) telling Britain that it must subordinate itself to Brussels has offended many in Britain. But America’s shift in priorities has some logic. Britain used to be a major power, and the European Union used to be a bickering trading organization. Now, Britain is steadily shrinking in power and prestige while Europe is growing into a more powerful political union (though the bickering continues.)

Britain doesn’t have the clout that it used to, so America is looking for a new ally that does.

The fact is, the U.S. administration no longer sees Britain as its friend. Its friend is Europe. The administration’s European track record proves it.

Washington-based foreign affairs correspondent Nile Gardiner details this track record in a blog post for the Telegraph. In January 2011, America’s ambassador to the UK, Louis Susman, said, “I want to stress that the UK needs to remain in the EU.”

Stronger British participation in Europe “is crucial if, together, we are going to meet all the global challenges facing us, including climate change and security,” he said. “But let’s be clear: All key issues must run through Europe.”

In 2010, U.S. Vice President Joe Biden said Brussels could claim the title of “capital of the free world.” He praised steps toward closer integration, like the signing of the Lisbon Treaty. “The Obama-Biden administration has no doubt about the need for and strongly supports a vibrant European Union,” he said. “We believe it’s absolutely essential to American prosperity and long-term security.”

Now, America’s support for Europe could be set to move beyond rhetoric. Many commentators expect a new U.S.-EU trade initiative to be announced early this year.

“Despite approving noises from both sides of the ocean over the years, a comprehensive EU-U.S. trade deal has never seriously been attempted,” wrote the Wall Street Journal last month. “That could be about to change, and a good thing too.”

Both sides see a transatlantic free-trade deal as a cost-free way to boost the economy.

European Commissioner for Trade Karel De Gucht recently said that “Perhaps not a marriage, but certainly a closer partnership” between the EU and the U.S. was in order. De Gucht is still discussing the feasibility of such a plan with U.S. authorities, but said, “I am confident we will be able to deliver it very soon.”

The idea also has strong support in the U.S. In November, U.S. Secretary of State Hillary Clinton supported the idea, saying, “If we work at it, and if we get this right, an agreement that opens markets and liberalizes trade would shore up our global competitiveness for the next century, creating jobs and generating hundreds of billions of dollars for our economies.”

“2013 presents the best moment for a serious U.S. trade initiative since Mr. Obama was first elected,” wrote Edward Luce in the Financial Times just over a week ago. “Most European governments, including the French and particularly the Germans and British, are also enthusiastic.”

Luce sees the deal as more than an economic partnership. He heralded “the geostrategic benefits to what is likely to be called the ‘transatlantic partnership.’”

“By 2030, Asia’s economy will be larger than that of the U.S. and EU combined according to the U.S. National Intelligence Council’s Global Trends report,” he wrote.

“By acting now when they still account for half the world’s economy, the U.S. and EU still possess the leverage to set the global standards that others, including China, are likely to follow,” he continued. “Five years on, it may be too late. In the words of a senior EU official, the round would be ‘strategic not tactical, global not bilateral.’”

Such a free-trade deal would not be easy. It would require many compromises, which Brussels may not be willing to make. But the recent surge in interest in a transatlantic free-trade partnership shows that America is keen on pursuing an alliance with Europe.

Even America’s so-called “Asian pivot” is pushing it toward this alliance. It’s a little counterintuitive, but if America wants to focus more attention on Asia, then it must have a strong, reliable partner across the Atlantic to cover for it. This is why America is trying to persuade EU countries to spend more on defense, rather than relying on the U.S. The U.S. seems like it would even favor a strong military union in Europe.

It’s still a bit of an exaggeration to say the EU is now America’s new best friend. It’s the direction transatlantic relations are heading, not a destination that has already been reached.

But they will get there. Two important trends the Trumpet has watched for years are the breakdown in relations between Britain, America and Israel, and America’s growing love for Europe, and especially Europe’s leader, Germany.

America can see that its global power is diminishing. But rather than addressing the cause of it, it is trying to build up a new power in Europe.

The loss of America’s power ultimately gets back to individual morality and a refusal to trust God for deliverance. This loss of power isn’t causing the U.S. to turn back to God in repentance; instead America is turning to its new European ally.

Bible prophecy reveals that this trust will be betrayed in a frightening and horrible way, but it will teach America a vital lesson. The American people will ultimately learn to trust God, not other nations, for protection.