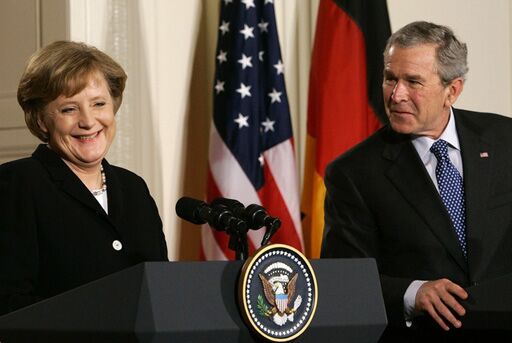 In June last year we wrote that if Angela Merkel became chancellor of Germany, Berlin’s relations with the United States would improve significantly. Seven months have passed, and it appears this scenario is coming to fruition.

Just months after her assuming leadership in Germany, signs are emerging that the German chancellor is seeking stronger relations with her counterpart and friend across the pond. In what could prove a major milestone in German-U.S. relations, Chancellor Merkel visited with President George W. Bush in Washington last week. The significance of the change occurring within German-U.S. relations cannot be underestimated.

Last Friday, Stratfor analysts also noted the importance of the German chancellor’s visit with the American president that was to occur that day. “Geopolitics teaches that place is everything and that personalities are unimportant. But from time to time, an exceptional individual emerges who is able to affect the world in unique ways and make more of himself or herself—or more importantly, his or her country—than the average leader. …

“Similarly, on occasion there are critical events that so drastically affect the world that one cannot help but wonder if it really is all about location. …

“While it is difficult to identify such key moments without the benefit of hindsight, we may have arrived at another of these critical junctures: German Chancellor Angela Merkel’s first meeting with U.S. President George W. Bush, due to take place in Washington on Friday” (January 13; emphasis ours throughout). Stratfor described the event as a watershed event in world history—but the truth is quite different from what these analysts understand.

Regarding the meeting, the article continued, “This is a meeting about business. About Iran, about the European Union, about Russia, about Iraq, about China. About what happens when Chirac is gone, or Berlusconi is ejected from office, or Russia turns off natural gas exports again.

“This is a meeting about how two allies who were once incredibly close can be close once again.”

Chancellor Merkel’s visit to America clearly signals a dramatic shift away from the anti-American stance of former Chancellor Gerhard Schröder. As the largest and most influential nation in Europe, Germany, in improving its relations with the United States, will likely set the tone for an improvement in European-American relations. Considering that both political powers have mutual concerns on the global scene—such as Iran’s growing belligerence toward Europe and America and the volatility in Russian energy supply—it is highly likely that European-American relations will continue to perk up.

Over the next few months it will become clear that during the German chancellor’s recent visit to America, the foundation of a mutually beneficial—yet, ultimately, short-lived—relationship between America and Europe was established.

In a follow-up article after the summit, Stratfor again highlighted the significance of the event, and its likely repercussions on the global scene. “In her first press conference on U.S. soil, new German Chancellor Angela Merkel indirectly repudiated the long-time Franco-German axis—and planted the seeds for a deep revamping of U.S.-German relations” (ibid.) With a history plagued by conflict and mistrust, German-American relations definitely appear to be on the mend.

“For his part, Bush also played not only to the German crowd, but was sure to do so in a way that made clear that U.S. interests are in lockstep with Berlin’s, going out of his way to emphasize that Germany is the ‘heart of Europe’ and enthusiastically extolling Merkel’s virtues” (ibid.).

As this occurs though, it is important to bear in mind the history of America’s relations with Germany. The United States defeated this nation in two world wars. It would be naive of America to view Germany’s present warmth without reservation as a gesture of a long-term desire for peace and friendly relations.

There are fundamental divisions between the German and American peoples. A definite undercurrent of anti-Americanism clearly remains within the minds of many Germans and Europeans. The Economist stated that a 2005 poll by the Pew Global Attitudes Project demonstrated that “skepticism about the future of their union does not imply that Europeans want closer transatlantic ties. Half or more in every non-American country surveyed said they wanted Europe to be more independent of the United States, and huge majorities—between 70 percent and 80 percent—said they thought the world would be better off if America faced a rival military power” (June 23, 2005).

In the long run, friendship with the U.S. is not something that Germany or Europe needs, or even wants. Europe has a well-established history of making policy decisions based on a principle of competition—not cooperation—with the U.S. Whether it be in the area of technology, trade, military or diplomacy, a German-dominated Europe has been challenging the U.S. as it emerges as a superpower in its own right. Time will prove the current friendship with America to be purely a short-term relationship of convenience.

But the most compelling evidence of the transience of this relationship is Bible prophecy.

The Bible clearly describes an end-time flowering of German-U.S. relations, such as we are seeing today. But it presents it within a blood-curdling context: This unity immediately precedes a tragic backstabbing by a united German-led European union of nations.

Notice this striking prophecy in Ezekiel 23:9: “Wherefore I have delivered her [discussing America primarily] into the hand of her lovers, into the hand of the Assyrians [end-time Germany], upon whom she doted.” If you study this passage, it shows a perverse relationship between these two nations that ends with Germany, after gaining America’s trust and support, fatally betraying the U.S. in a tragic double-cross.

Over the next few months and years, watch for America to increasingly become “lovers” with Germany, foolishly looking to the greatest war-mongering nation in history for friendship, peace and safety. Fooled by rhetoric, America will lie vulnerable to German betrayal.

The Trumpet’s editor in chief wrote in the September-October 2000 issue: “The U.S. trusts Germany—our lovers, as Ezekiel calls them (Ezekiel 23:4)—more than we trust God! That could be the worst foreign-policy mistake we have ever made—or ever will make.”

The seeds of Germany’s future betrayal of America can be seen in the pro-American policies espoused by today’s German government. Germany—and Europe’s—relationship with the United States is sure to improve, but time will prove it to be a short-term fling. As inconceiveable as it might seem, the Bible clearly tells us that America will eventually be dumped and betrayed by her European “lovers.”