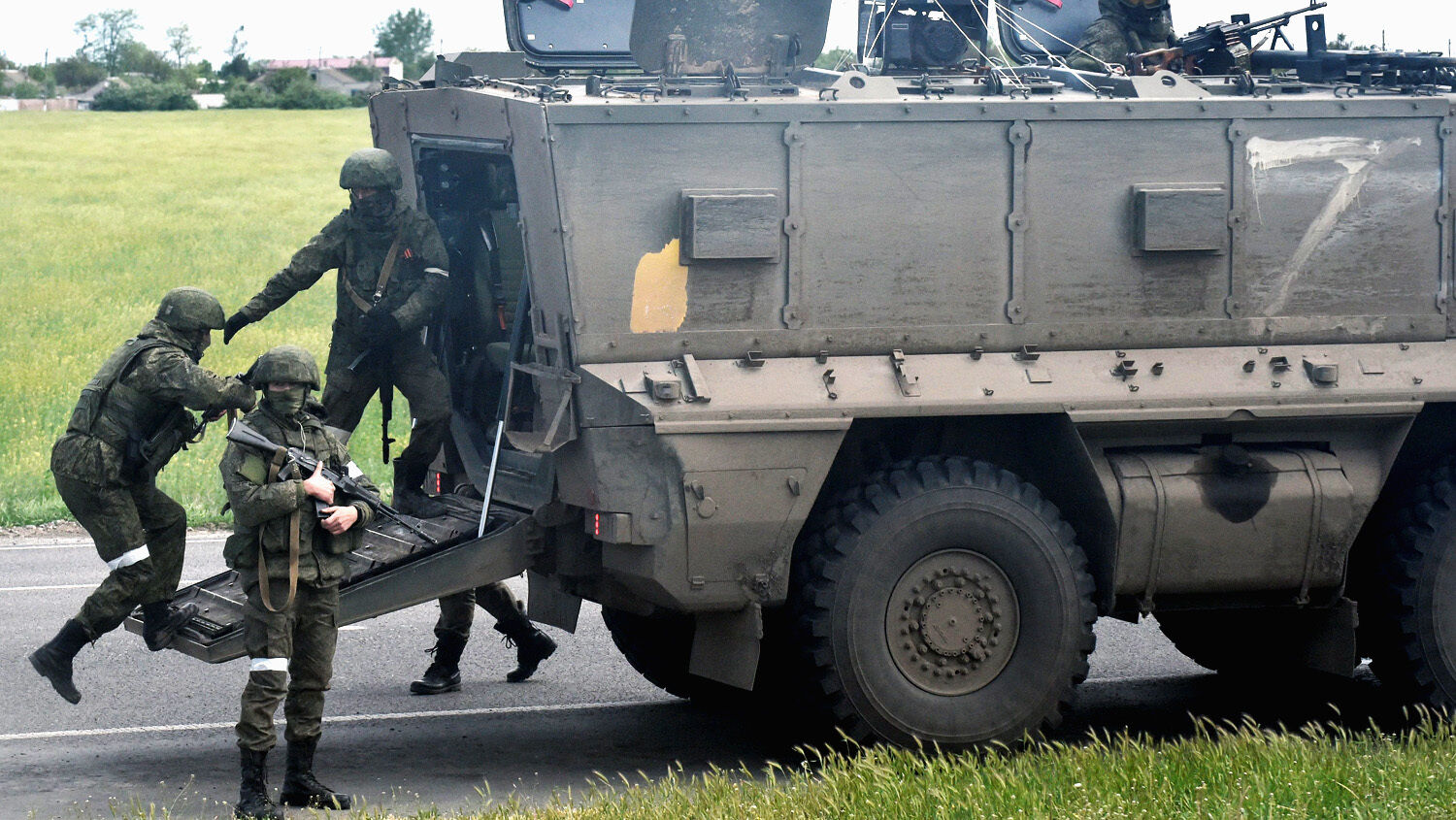 Russian servicemen on a roadside in the Kherson region on May 19, amid the ongoing Russian invasion of Ukraine
OLGA MALTSEVA/AFP via Getty Images

And Vladimir Putin says he is just getting started.

Russian forces are illegally holding, torturing and forcibly displacing Ukrainian civilians in the occupied regions of Kherson and Zaporizhzhia, Human Rights Watch reported on July 22, in the latest evidence of incalculable evil in Russia’s war.

Atrocities carried out by Russian soldiers north of Kyiv, Ukraine’s capital, became the subject of war crime hearings earlier this year. But the new report focuses on the south of the nation, where Russian occupational forces maintain a firm grip.

“Russian forces have turned occupied areas of southern Ukraine into an abyss of fear and wild lawlessness,” Yulia Gorbunova, senior Ukraine investigator with Human Rights Watch, said. “Torture, inhumane treatment, as well as arbitrary detention and unlawful confinement of civilians, are among the apparent war crimes we have documented, and Russian authorities need to end such abuses immediately and understand that they can, and will, be held accountable.”

The Human Rights Watch report is built on testimony by 71 people from Kherson, Melitopol and a dozen other cities in occupied southern Ukraine. These individuals detailed dozens of cases in which Russians detained Ukrainian civilians arbitrarily and tortured many of them, as well as cases in which Russians “disappeared” civilians. The main torture methods described were prolonged beatings, electric shock and suffocation with plastic bags. These resulted in numerous injuries, including broken bones and teeth, concussions, severe burns, cuts and bruises, as well as death.

The testimony also included accounts about two Ukrainian soldiers—Denis Mironov and Vatali Lapchuk—who were tortured to death, and a third who survived the abuse. The survivor told Human Rights Watch about Mironov’s final weeks: “Denis was in pitiable state. … He spoke in a whisper, one word at a time … could not finish a sentence. He groaned, he could not cough. It was obvious that his chest was pierced, and his ribs were pressing on his lungs. He could not lie down properly … he could only sit. … We all lost a lot of weight. Denis could eat only apple sauce. … We spoon-fed him …. For 22 days without any medical attention, he was slowly dying.”

Denis Mironov was tortured to death for resisting in occupied Kherson. His ribs were broken, and one of them pierced his lungs. Then Denis was taken to the occupied Crimea. He died there: https://t.co/d2C8NOrXWd#tortured #PutinWarCrimes pic.twitter.com/iXzds8ZqLM

Human Rights Watch says the purpose of the violence is to “obtain information” and “instill fear so that people will accept the occupation, as Russia seeks to assert sovereignty over occupied territory in violation of international law.”

One former detainee described Russian forces beating him repeatedly with a baseball bat. Another had to be hospitalized for a month for injuries sustained during torture. And a third said that after seven days in a Russian prison, he had broken ribs and a busted kneecap, and could “barely walk.”

In many cases, civilians are simply never seen again, without any explanation from the Russian forces who detained them. Such are said to have been “disappeared,” which often means murdered and buried in a mass grave without identification. Human Rights Watch estimates that at least 600 civilians in Kherson alone have suffered this fate since the war erupted in February.

Numerous accounts detail Russians freeing a detainee only after he or she had signed a pledge to “cooperate” with occupiers and had delivered a statement on camera apologizing for attempts to defend their homeland and imploring others to welcome the Russians.

A hostage video from Kherson. A Ukrainian woman with swollen eyes and shaven head is forced to say on camera that she has undergone ‘a denazification course’, apologize to Russians. It’s hard to imagine what was done to her. All proponents of Ukraine’s concessions should watch it https://t.co/09Ds6qfagG

The Geneva Conventions allow warring parties to detain combatants as prisoners of war and to hold civilians in some cases. But they prohibit arbitrary detention, improper confinement, disappearances and torture of any kind. Such practices may be categorized as war crimes and crimes against humanity. Political leaders behind such acts, as Russian President Vladimir Putin is behind these, can be charged for the crimes of their soldiers.

But Putin appears unconcerned by any such possibilities. He maintains that Ukraine has never really existed as a country separate from Russia, and that his forces are engaged in a noble mission to rid the nation of Western-allied, “Nazi” elements so that it will embrace Mother Russia. It is impossible to know how much of his own propaganda Putin truly believes. But on July 7 he said Russia has “not yet commenced anything serious” in Ukraine. The violence so far is only the beginning.

#Putin: “We haven’t even really started anything yet. But the West can try.” pic.twitter.com/M8n5DWxkKO

Putin’s increasing belligerence indicates a dark future for Russia, Ukraine and the world. When these tragic current events are viewed alongside Bible prophecy, the indication becomes certain.

The Bible warns that a massive power will rise from the East in the modern age. Revelation 16:12 calls this power “the kings of the east.” Revelation 9:16 notes that it will field an army of 200 million men. Daniel 11:44, 12:1 and Matthew 24:21-22 make clear that this bloc will be one of the main belligerents in a nuclear World War iii.

Ezekiel 38 gives details about which nations will contribute soldiers to this mega-army and shows that it will be led by one country—and one man.

Verse 2 states: “Son of man, set thy face against Gog, the land of Magog, the chief prince of Meshech and Tubal, and prophesy against him.” Bible scholars largely agree that “Gog” refers to Russia and “the land of Magog” includes the region of modern-day China. Meshech is related to the modern Russian spelling of Moscow: MocĸBa. And Tubal refers to the Russian city of Tobolsk, to the east of the Ural Mountains.

Still another name for all of Russia lies somewhat covertly in this passage. There is disagreement over how the Hebrew word rosh in this verse should be rendered in English. The King James Version quoted above translates it as the adjective “chief.” But the accurate translation is not as an adjective but a proper noun: Rosh. This is an ancient term for the peoples who became known as Rus—Russia.

The mention of Magog shows that this man’s leadership spills over the borders of Russia and into China. Verses 5-6 include ancient names for the peoples of such nations as India and Japan, showing that these will also lend their military might to this multinational power led by Russia.

When these Bible passages are examined alongside current events in Russia, the identity of this “prince of Russia” becomes clear. In the September 2014 Trumpet, Mr. Flurry wrote: “I strongly believe Vladimir Putin is going to lead the 200 million-man army. Just look at the power he already has. Can you think of any other Russian politician who could become so powerful and have the will to lead Russia into the crisis of crises? I see nobody else on the horizon who could do that.”

By the time Mr. Flurry wrote his booklet The Prophesied ‘Prince of Russia’ in 2017, he was even more certain that Putin would be the man to fulfill this role. “His track record, his nationality and his ideology show that he is fulfilling a linchpin Bible prophecy,” he wrote. “The time frame of his rule also shows that nobody else could be fulfilling the Ezekiel 38 and 39 prophecy.”

On March 8, Ukrainian President Volodymyr Zelenskyy implored the international community to help Ukraine stop Russia’s murder of their men, women and children, and he called Putin a “beast.” This term is not often applied to political leaders, but the biblical books of Daniel and Revelation actually use it to describe the predatory nature of leaders who have reigned throughout much of history—and who are becoming more powerful in the modern day.

‘I AM NOT AFRAID’: Defiant Zelenskyy reveals location, puts world on notice about who ‘beast’ Putin’s next target will be. https://t.co/23uz1bI2ss pic.twitter.com/u9hXSXvgd4

“There is a reason God uses this terminology,” Mr. Flurry wrote in our July 2014 issue. “When such men attain power, they become cunning, ferocious beasts. Throughout history they have routinely thought like wild animals, wanting to conquer, pillage, burn and destroy. … God calls these leaders beasts for a reason [and] we haven’t even seen the worst of these beasts!”

A grim future is coming for Russia, Ukraine and beyond. But Mr. Flurry says the fact that this beastly “prince of Russia” is in power shows that the most jubilant and hope-filled event in human history is near. “Vladimir Putin is a sign, literally a sign, that Jesus Christ is about to return!” he writes in his booklet. “This is one of the most inspiring messages in the Bible. What we are seeing in Russia ultimately leads to the transition from man ruling man to God ruling man!”

To see Putin’s forces ravening in Ukraine, mauling civilians, and committing torture and other war crimes is dejecting. But these developments are closely linked to the best news we could hear: Jesus Christ will soon return to Earth and bring in an era of peace for the peoples of Russia, Ukraine and all the world.

To understand more about what lies ahead, order your free copy of The Prophesied ‘Prince of Russia.’