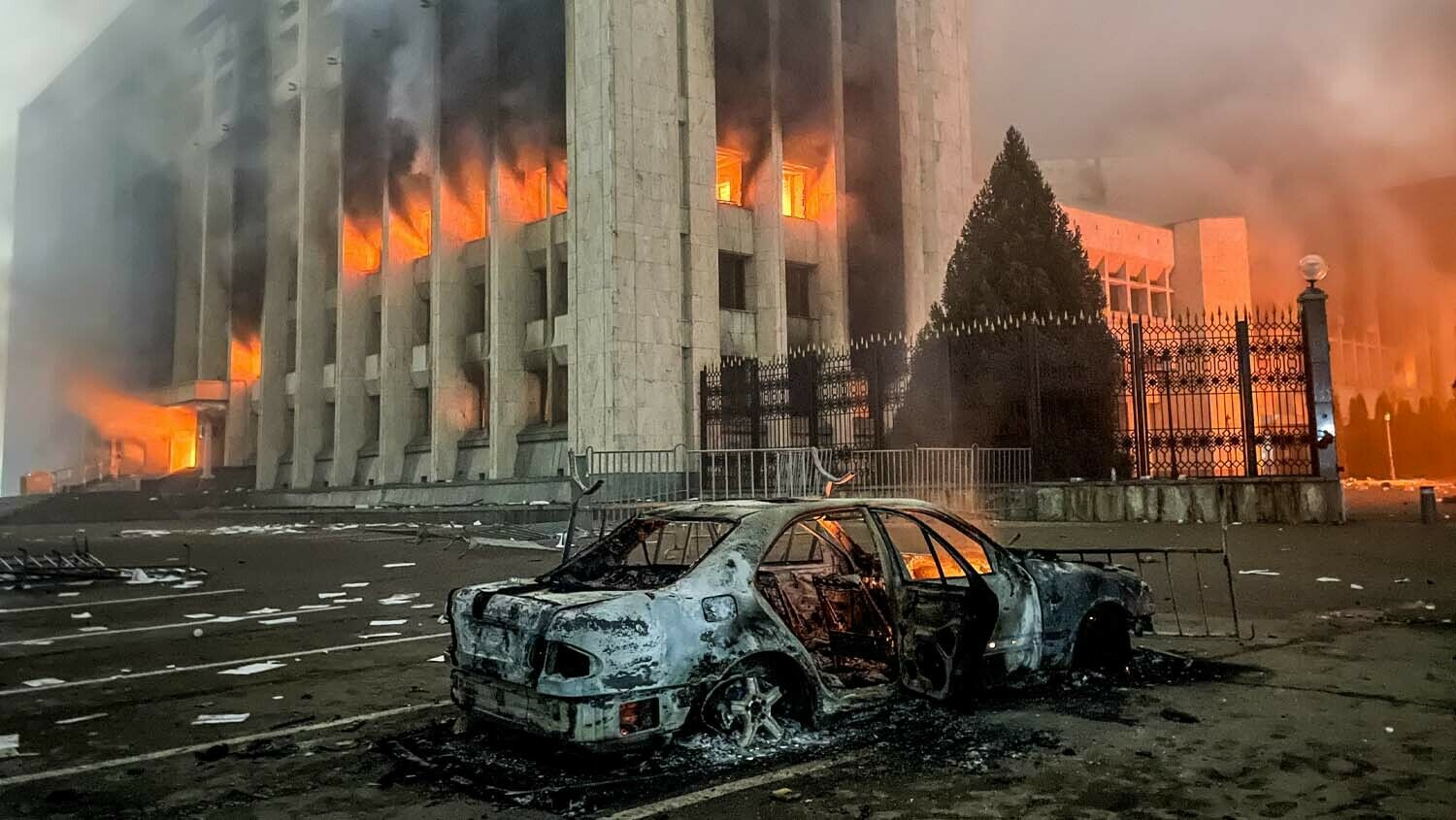 A burnt car is seen near the mayor’s office, which is on fire, as protests spread across Kazakhstan over rising fuel prices.
Valery Sharifulin\TASS via Getty Images

And there’s little reason to expect Russian forces to ever leave.

The revolt began in Kazakhstan’s Mangystau region on Sunday in response to sharp increases in the price of liquefied petroleum gas, which many Kazakhs use to fuel their cars. In less than a week, the movement has spread into every major city in the country and broadened to include a range of political grievances against an entrenched regime that has ruled Kazakhstan since it broke from the Soviet Union in 1991.

“Old man, go away!” many protesters are chanting, referencing Nursultan Nazarbayev, who led the nation even back in the Soviet era and presided over its transition to independence 30 years ago. He became a close ally to Putin and was reelected, against token challengers, in 1999, 2005, 2011 and 2015. Nazarbayev formally stepped down as president in 2019. But the 81-year-old remained head of the ruling party, prompting outrage at his lingering role as the nation’s de facto ruler. Protesters are now tearing down statues of him across the country.

More chaotic footage from Kazakhstan seeping out on Telegram. This purportedly from Aktobe - car driving into a line of riot police. Don’t know the original source unfortunately. pic.twitter.com/3BEKlZMKIs

In Almaty, the nation’s business capital and largest city, rioters have set fire to a presidential residence and a mayor’s office. Administrative buildings in several large cities across the country are also ablaze. Protesters have captured the nation’s main airport and killed at least 13 members of national security forces, including two who were reportedly decapitated. Another 353 security force members have been injured.

President Kassym-Jomart Tokayev, who took over as Nazarbayev’s handpicked successor, sacked the entire government on Wednesday and declared a state of emergency. As the country’s elites fled in private jets, Kazakh officials said they have killed “dozens” of rioters and arrested more than 2,000. They pulled the plug on the Internet in an effort to prevent protesters from continuing to organize. But as the demonstrations persisted, it was clear that these efforts were insufficient. So Tokayev called on his powerful neighbor to the north for help, and Putin eagerly responded.

Putin has agreed to send assistance to Kazakhstan to help suppress an unprecedented pro-democracy uprising. Kazakhstan’s President Tokaev officially appealed to the Kremlin and branded nationwide protests “international aggression” while vowing to act “as toughly as possible” pic.twitter.com/eCdlus1RYa

In less than a day, Russian paratroopers were on the ground in Kazakhstan. And under the banner of the Russia-led Collective Security Treaty Organization (csto), an undisclosed number of “peacekeeping” forces are now arriving.

The soldiers’ “main tasks,” according to a csto statement, are the “protection of important state and military facilities, assistance to the law enforcement forces of the Republic of Kazakhstan in stabilizing the situation and returning it to the legal field.”

But Putin has plans for Kazakhstan that go far beyond this.

Early in his reign, he called the Soviet Union’s collapse the “greatest geopolitical catastrophe of the [20th] century.” He has made plain that what he misses is not the economics of the ussr, but its power and prestige. Putin looks back fondly on the epoch when Russia and 14 other nations—including Kazakhstan—were forged under the Soviet hammer into one colossal, nuclear-armed superpower—all under the control of the Russian leader.

Putin has actively worked to rebuild Russian power in several of these nations, invading Georgia in 2008 and annexing part of Ukraine in 2014. He has also used political pressure to increase dominance over Armenia, Azerbaijan, Belarus, Kyrgyzstan and Tajikistan.

Now with a political crisis burning through Kazakhstan, and with Russian troops already deployed in the nation, Putin could bring it much more firmly under Russian control.

Geopolitical strategist Peter Zeihan wrote: “Having Kazakhstan on the ropes and in need of aid—including an open invitation for Russian soldiers that are unlikely to leave after protesters go home—is right where Russia likes its neighbors to be.”

Zeihan and other analysts believe that in light of Russia’s troop deployments, the best-case scenario is now for Kazakhstan to become a satellite state like Belarus. “Its days of being functionally independent or even nominally independent,” he said, “are pretty much over.”

Russia continues to deploy huge number of weaponry and personnel—peacekeepers to Kazakhstan pic.twitter.com/7Ua6nou77b

Trumpet editor in chief Gerald Flurry has called considerable attention to Vladimir Putin over the years because of what Bible prophecy teaches about a multinational Asian alliance that will form the years ahead. Around the year a.d. 90, the Apostle John was inspired to write: “And the number of the army of the horsemen were two hundred thousand thousand: and I heard the number of them” (Revelation 9:16).

This is a military force of 200 million soldiers, which is far vaster than any force ever assembled in mankind’s war-torn history.

The Scriptures provide several key details about this colossus. Revelation 16:12 calls it “the kings of the east,” showing it to be a group of mainly Asian countries. Prophecies in Ezekiel 38 and 39 discuss a “prince of Rosh, Meshech, and Tubal” (Young’s Literal Translation). Meshech and Tubal are ancient names designating the modern Russian cities of Moscow and Tobolsk. And Rosh is a variation of an ancient name for Russia, as shown in Bible commentaries, such as the Jamieson, Fausset and Brown Commentary.

In his 2017 booklet The Prophesied ‘Prince of Russia,’ Mr. Flurry says Vladimir Putin is the leading “prince” discussed in these passages. And he explains that Putin would be adding more former Soviet nations to his domain. He writes:

The use of all three names [Russia, Moscow and Tobolsk] shows that this is an individual ruler of all the peoples of Russia, from the west to the east. The reference to the cities of Moscow and Tobolsk helps us see how vast Russian territory is in these latter days. This giant swath of land indicates the prince will probably conquer more nations of the former Soviet Union.

In the years since that was written, Putin has asserted more and more power over several former Soviet nations. As his troops descend upon a chaotic Kazakhstan this week, that trend is picking up considerable speed.

Mr. Flurry explains that Putin’s leadership of Russia, including his conquests over former Soviet states, shows that a time of worldwide trouble is fast approaching. But he emphasizes that there is also great hope at the core of these prophecies. He writes that the fact Putin is now leading the nation proves that the most hope-filled event in mankind’s history is close. “Mr. Putin’s warfare is going to lead directly into the Second Coming of Christ. … Vladimir Putin is a sign, literally a sign, that Jesus Christ is about to return!” he writes. “This is one of the most inspiring messages in the Bible.”

To understand this week’s events in Kazakhstan in light of these Bible passages and to understand the hope that is connected to them, order your free copy of Mr. Flurry’s booklet The Prophesied ‘Prince of Russia.’