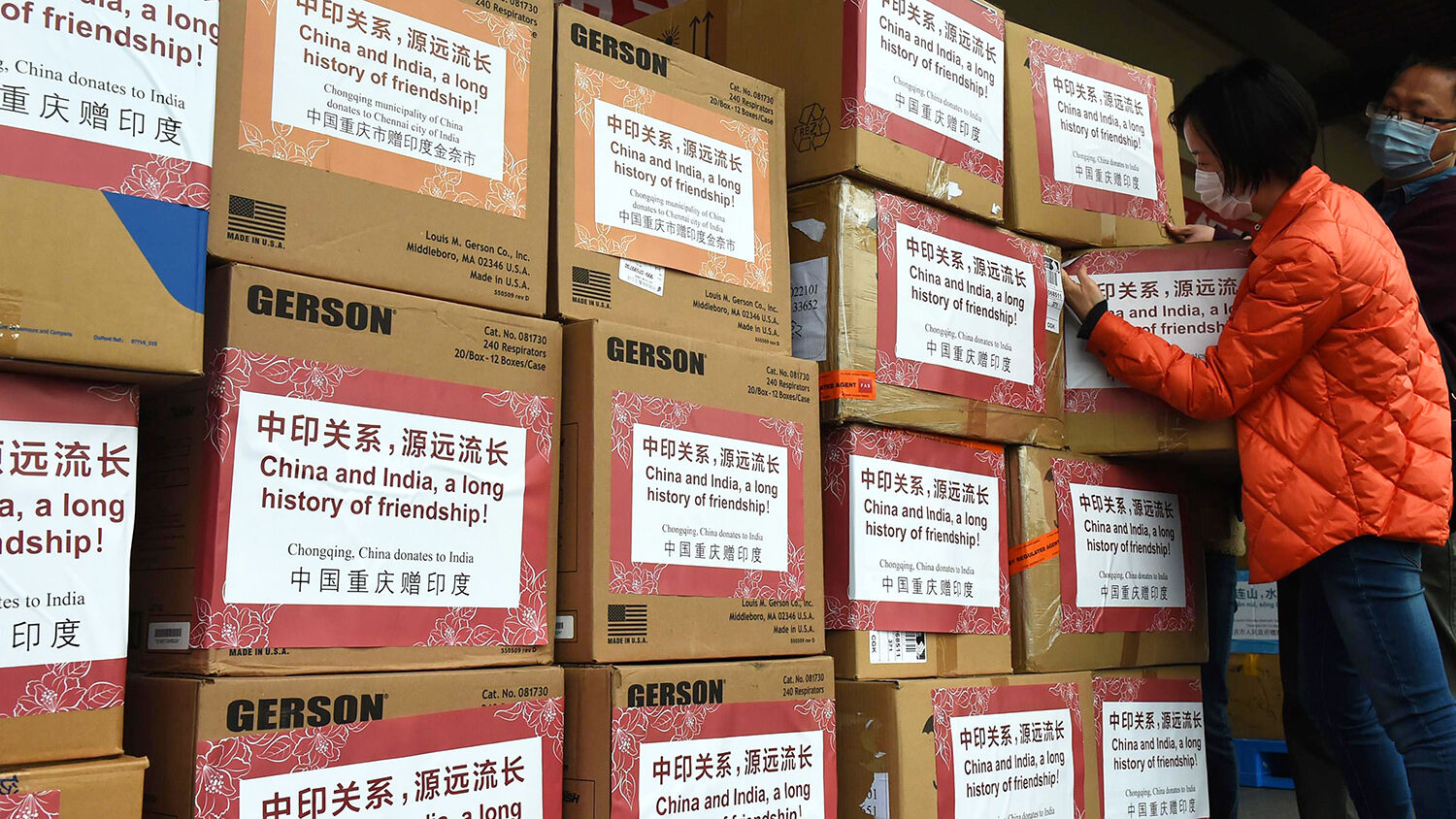 On April 2, staff in Chongqing, China, check medical supplies, which will be donated to India.
Zhou Yi/China News Service via Getty Images

The dragon and the elephant continue to draw closer.

Seventy years ago this month, India became the first of Asia’s non-Communist nations to open formal diplomatic relations with China. And though the coronavirus outbreak has forced the two to cancel plans to commemorate the anniversary, both sides are optimistic that the pandemic will bring Sino-Indian cooperation to a new level.

On April 1, Chinese President Xi Jinping stressed the extraordinary development of cooperation between the two nations in recent years and said they now face an unprecedented level of opportunity. He expressed eagerness to “elevate China-India ties to a higher level” in order to “bring more benefits to the two countries and peoples and contribute more positive energy to Asia as well as the world.”

Chinese Foreign Ministry spokesperson Hua Chunying lamented the cancelation of some of the 70 commemorative activities, including joint military drills that had been planned this year to celebrate the 70 years of bilateral ties. But she remained sanguine regarding the state of the India-China relationship. China “would like to work with India to elevate our bilateral relationship to a new height,” she said, adding that the activities that were put on hold due to the coronavirus will “gain a stronger impetus after the pandemic.”

Hua stressed that China would do all it could to assist India in its battle to contain the covid-19 outbreak that is now spreading through India. Likewise, Chinese Foreign Ministry Spokesperson Geng Shuang said China “stands ready to share its experience in epidemic prevention and control and diagnosis and treatment, and provide further support and assistance to the best of our capability in light of the needs of the Indian side.”

Meanwhile, on the Indian side, Prime Minister Narendra Modi sent a congratulatory message to Chinese Premier Li Keqiang. He lauded the level of stability that Sino-Indian ties have recently achieved and said the two should further “strengthen coordination” and should increasingly “address global challenges together.”

Notably, despite China’s deplorable handling of coronavirus and its silencing of whistleblowers who could have prevented it from propagating worldwide, the Indian government has refrained from blaming the Chinese Communist Party for the outbreak and spread. Indian External Affairs Minister Subrahmanyam Jaishankar wrote in a March 24 tweet that the two nations are building collaborative efforts to combat the illness.

Discussed with State Councilor and FM Wang Yi of #China our working together in combating #COVID19. Agreed to build further on our bilateral efforts in this domain. Exchanged views on the forthcoming #G20 Summit.
Global challenges require global cooperation.

It is possible that as the costs of the illness and national lockdown set in across India, the government will begin ascribing more blame to China. But whatever may happen in the near term, Bible prophecy shows that in the long term India will join an Asian multinational conglomerate that will emerge in the end time. Scripture says this power will play a key role in a nuclear World War iii and the events leading up to the return of Jesus Christ.

The book of Revelation calls this Asian power “the kings of the east” and says it will be a force of 200 million soldiers (Revelation 16:12; 9:16).

Ezekiel 38 provides more details about this largest army ever to be assembled on Earth. Verse 2 shows that it will be led by Vladimir Putin’s Russia, with China—included in the area anciently called Magog—in a position of secondary leadership.

The King James Version says “Ethiopia and Libya” will be part of this gargantuan force. These two names should be translated “Cush” and “Phut,” as several other Bible translations such as the Darby Bible and Young’s Literal Translation correctly render them. Some of the peoples of Cush and Phut settled in Africa, but the remainder migrated to the Indian subcontinent. From the context, it is plain that these names in Ezekiel 38:5 refer not to the African segments of these peoples but to the modern people of India—and possibly also of Pakistan and Bangladesh. Verse 6 shows that modern Japan will also be part of this formidable “kings of the east” power bloc.

Trumpet editor in chief Gerald Flurry writes in his booklet The Prophesied ‘Prince of Russia’ about India’s role in this biblically prophesied force: “This is significant because India has a population of 1.2 billion people—plus an advanced nuclear arsenal! When you put India and Japan together with Russia and China, it is easy to see how an army of 200 million soldiers could be formed.”

India has long been a close partner to Putin’s Russia. And now, despite China’s unleashing of the coronavirus on the the world, India’s ties with China are deepening. It is not difficult to picture India contributing its vast population and its military power to a bloc led by Russia and China.

To better understand India’s role in the end-time Asian axis now forming, order your free copy of our booklet Russia and China in Prophecy.