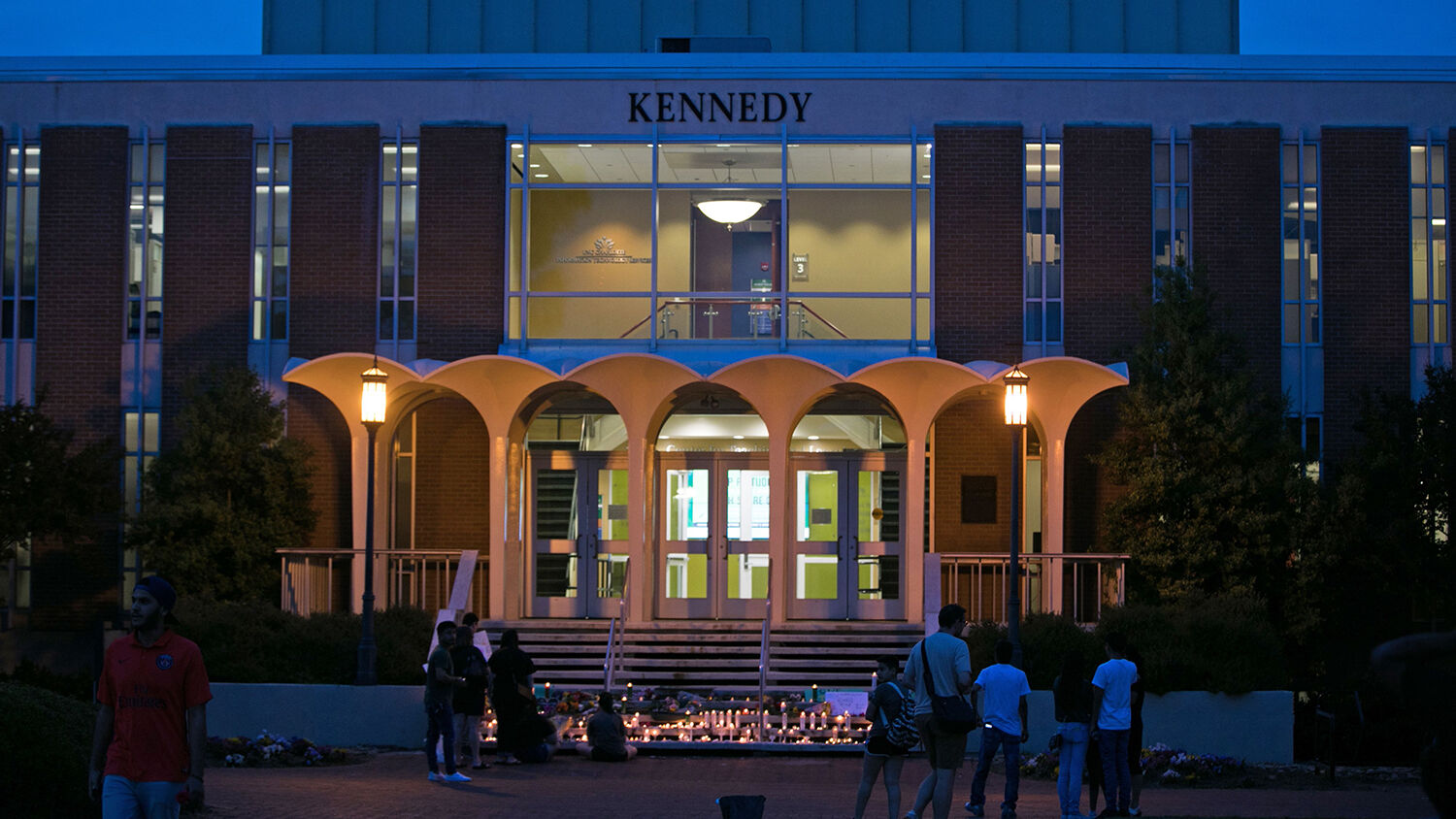 Students lay candles and flowers at the steps of Kennedy Hall to honor the victims of the previous day’s shooting at the University of North Carolina.
LOGAN CYRUS/AFP/Getty Images

This terrifying problem has a cause—and a solution.

“I heard the gunshots, chairs moving quickly, then nothing.” Those were the words of a junior at the University of North Carolina–Charlotte, who asked me to identify him only by his first name, John.

John was in the classroom in uncc’s Kennedy Building on Tuesday afternoon when 22-year-old Trystan Andrew Terrell entered, sat down for about 10 minutes, then took out a pistol and opened fire on the students.

I studied at uncc in the early 2000s. The campus felt like a safe, pleasant and even tranquil place. I remember how green and well landscaped it was at this time of year. I remember once while walking near the Kennedy Building, a student I didn’t know stopped me to ask what song I was whistling. In my memory, uncc is a peaceful place. It’s hard to imagine it as the scene of carnage and senseless murder that John and so many others witnessed there this week.

John initially thought he had heard a balloon pop on the far side of the classroom. It was a sunny afternoon, and police officers were assembled outside near the Kennedy Building for an end-of-semester concert scheduled to begin a short time later. The campus felt safe to him, as it had for me. It had to have been a balloon.

But then John saw students rushing toward the door near where he was sitting. “The only thing I saw were those in front of me running,” John told the Trumpet on May 1, explaining that the long classroom’s angular shape meant he heard but could not see the violence at the other end. Soon he understood what the sound had really been, and it overwhelmed him. “I heard the gunshots, chairs moving quickly, then nothing,” he said. “There’s just a complete gap in what I can remember hearing. At that point, it didn’t matter. I just needed to run. Another student in a student forum said he heard screams. I don’t know if I was out so quick I didn’t hear them or if I blocked them out.”

Almost immediately after Terrell began firing, a student named Riley Howell stood up. The 21-year-old environmental studies major could have tried to get out of harm’s way. Instead, he charged the killer. Howell “took the assailant off his feet,” according to police reports. With this heroic act, Howell undoubtedly saved the lives of some of his classmates. But in the process, he lost his own.

He was shot point-blank. Juliet Howell, Riley’s sister, told Today, “He put others before himself. He always has.”

Shortly after Howell tackled Terrell and lost his life, police officers charged into the room. They confronted and arrested Terrell, cutting the carnage short. It emerged that Terrell was a former uncc student; he had targeted the anthropology class in Kennedy Building for reasons not yet disclosed. He has been charged with killing Howell and one other student, and injuring four others.

According to Mass Shooting Tracker, a site that tallies attacks in which at least four people are shot, these murders in Charlotte marked the 120th mass shooting in the U.S. this year. That is a heartbreaking number: 120 shootings in just four months (an average of one per day), leaving 147 killed and 410 wounded. The tracker shows that two more mass shootings in the U.S. have occurred since the Charlotte attack on Tuesday.

“Mass shootings have become an epidemic in America,” wrote Trumpet editor in chief Gerald Flurry in November 2017, just after an especially horrendous attack at a Texas church. He wrote: “Many people have asked why these attacks keep happening. Many have been praying to God, but is He answering those prayers? What is the solution to this terrifying problem?”

In the May 2001 Trumpet issue, Mr. Flurry, along with contributor Eric Anderson, wrote, “Prior to the ’60s, school shootings were virtually unheard of. Today they are becoming commonplace. They can happen anytime, anywhere—with little or no warning.”

They continued, explaining that the answer to this terrifying problem is revealed in God’s instruction book for mankind: the Bible. There is “a reason for school violence,” they wrote and quoted Ezekiel 7:22-23, in which God says: “My face will I turn also from them, and they shall pollute my secret [holy] place: for the robbers shall enter into it, and defile it. Make a chain: for the land is full of bloody crimes, and the city is full of violence.”

They explained this passage, writing:

Here, the Almighty Creator of mankind promised that He would not bless or protect His chosen nations of Israel if their leaders would tolerate bloody crimes in their lands! [T]here has been a chain of bloody crimes in America’s schools. God is clearly upset about this ongoing problem! He is deeply concerned about kids killing kids—as well as the other bloody crimes which prevail in our land.

Regarding the solution to this savagery that is afflicting more and more of the United States, they wrote:

God’s laws, when followed, bring great peace, happiness and true freedom. The merciful, loving Creator desires our greatest happiness. It pains Him when He sees us suffering as a result of broken law. In the long run, His chastisement prevents the greater measure of suffering. … The Fifth Commandment requires children to honor their parents—and by extension every human being, including their classmates. The Sixth Commandment forbids murder. Both of these laws are still very much in effect today.

Curbing school violence must start in the home. It’s all about family. Then, after that, the problem must be addressed in schools and workplaces—and eventually, peace will spread to the nation and the world. That’s exactly how God will bring peace to this entire world when Jesus Christ returns! He will use family government and law to do it.

Despite the frequency of mass shootings, we must not grow accustomed or numb to these acts of evil. To better understand the cause of and solution to this terrifying problem, please take some time to read “Why School Violence.” And please watch Mr. Flurry’s sobering yet deeply inspiring Key of David episode, “The Mass Shooting in Texas.”