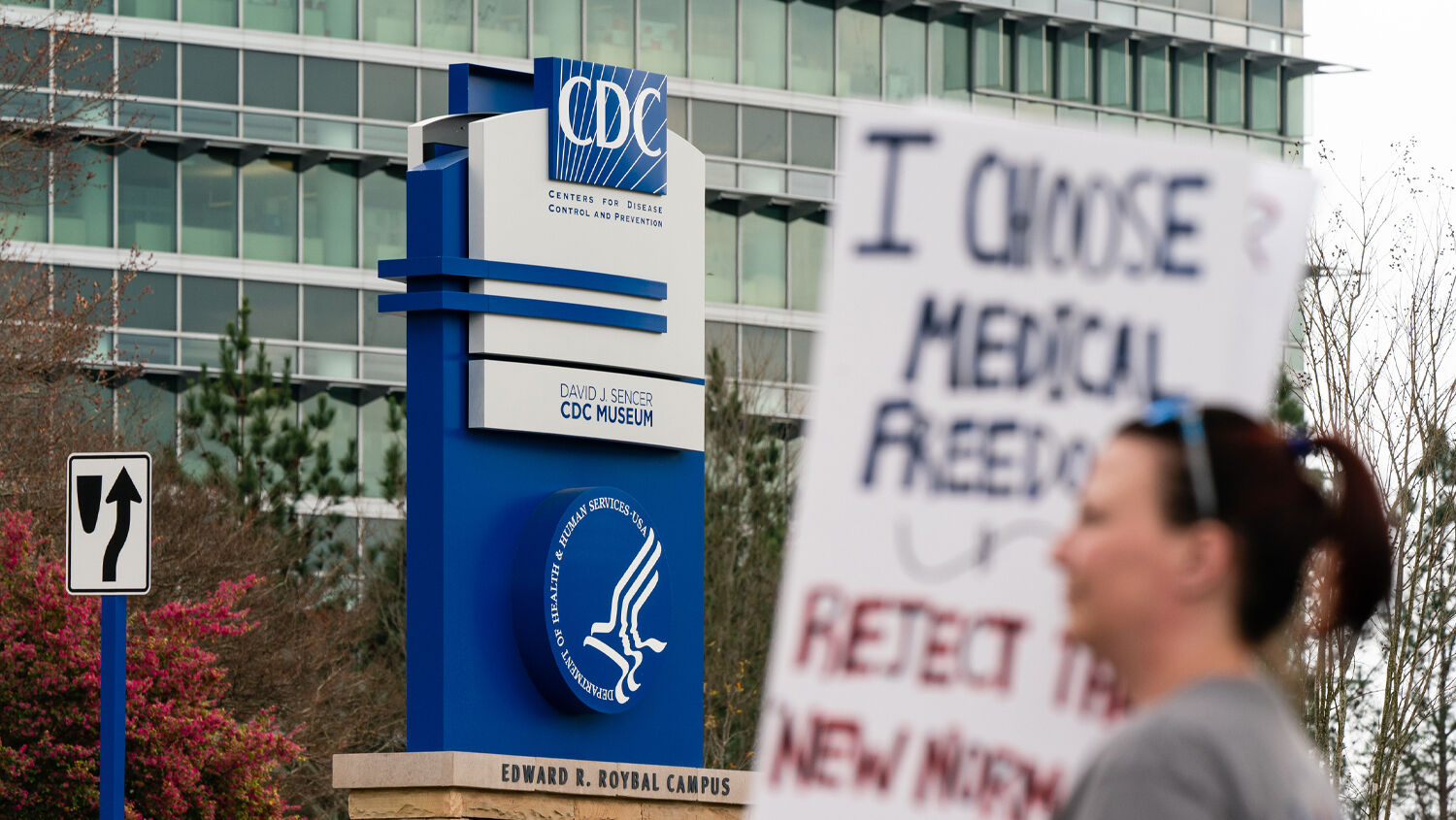 People are seen at a March 13, 2021, protest against masks, vaccines and vaccine passports outside cdc headquarters in Atlanta, Georgia.
Elijah Nouvelage/Getty Images

The United States is becoming a dystopian surveillance state. We recently found out that Joe Biden’s Federal Bureau of Investigation rummaged through the e-mails, text messages and electronic communications of 3.4 million Americans without a warrant in 2021. This figure represents a nearly threefold increase from President Donald Trump’s last year when the fbi conducted 1.3 million warrantless searches. And the fbi is not the only government agency spying on Americans. According to newly released documents obtained by Motherboard, the Centers for Disease Control and Prevention used location data from tens of millions of Americans’ phones to track compliance with covid-19 lockdown orders.

Location data from a smartphone can show where a person lives, works and travels. Online data-location brokers like SafeGraph collect and sell this data. After receiving free data about people’s movements from SafeGraph at the start of the covid-19 pandemic, the cdc decided it liked knowing about the daily activities of American citizens so much that it paid SafeGraph $420,000 for continued access to Americans’ phone metadata throughout 2021. This data was supposed to be aggregated so they cannot track any particular individual. But analysts are concerned the data could be “deanonymized” so that cdc officials can identify those who disobey lockdown orders or break curfew.

Cybersecurity researcher Zach Edwards told Motherboard, “The cdc seems to have purposefully created an open-ended list of use cases, which included monitoring curfews, neighbor-to-neighbor visits, visits to churches, schools and pharmacies, and also a variety of analysis with this data specifically focused on ‘violence.’” In other words, the cdc is monitoring every move that American citizens make in an attempt to halt the spread of the coronavirus.

Fox News host Tucker Carlson interviewed trucker Benjamin Dichter earlier this year. Dichter revealed that the Canadian government uses geotracking technology to monitor who is approaching the border. “Yesterday, it was my first time ever crossing the border in my truck with my digital passport,” he said. “I held my phone up to the border agent to give him the QR code, and do you know what he said to me? He said, ‘Oh, it’s OK; I don’t need it. Your phone has already popped up on my screen and is correlated with your passport.’ Think about that: Can you believe that? They know everybody who is coming up to the border before they are there, and are tracking them. Maybe it is outlandish, but what is to prevent the government from introducing that across Canada and not limiting it to just borders.”

Now the latest reports coming out of the cdc reveal that America is not far behind Canada in its attempts at mass surveillance. The U.S. government may not be monitoring the movements of specific digital passports yet, but it is talking about such passports and monitoring what percent of Americans are obeying its covid-19 lockdown orders.

At the rate America is hurtling toward authoritarianism, it may not be long until it has a Chinese-style social credit system. In Communist China, the government assigns citizens a “trustworthiness” score based on data gathered by mass surveillance. Suppose a Chinese citizen makes a political post online without a permit, questions a government decision, or refuses a state-mandated vaccine. In that case, his trustworthiness score goes down, and the police may show up at his door.

In George Orwell’s novel 1984, the government uses microphones, video cameras and two-way television screens to spy on people. Today, the government’s capacity for surveillance is unlike anything Orwell could have imagined. It can track personal phone calls, e-mails, social media posts and even purchases in real time.

When Sen. Frank Church led an investigation into government surveillance in the 1970s, he warned that technological advancements gave agencies unprecedented powers. “If this government ever became a tyranny, if a dictator ever took charge in this country, the technological capacity that the intelligence community has given the government could enable it to impose total tyranny, and there would be no way to fight back because the most careful effort to combine together in resistance to the government, no matter how privately it was done, is within the reach of the government to know,” he said in 1975. “I don’t want to see this country ever go across the bridge. I know the capacity that is there to make tyranny total in America, and we must see to it that this agency and all agencies that possess this technology operate within the law and under proper supervision, so that we never cross over that abyss.”

It does not take much imagination to visualize how a government could use mass surveillance against its citizens. As Senator Church said, it is almost impossible to rebel against tyranny with such surveillance powers because rebel leaders could not meet without the government eavesdropping. Now the cdc wants to track every move you make.

Trumpet editor in chief Gerald Flurry’s article “The Hidden Message of the Horowitz Report” exposes how Barack Obama and his administration tried to use the power of the Central Intelligence Agency, the National Security Agency and the fbi to create a dossier of propaganda against political rival Donald Trump, use that dossier to fraudulently spy on Trump campaign adviser Carter Page, and frame Donald Trump for illegally colluding with the Russian government to win the 2016 presidential election. If “deep state” agents were able to do these sorts of things to the president-elect of the United States, what could they do to you? They will be able to do anything they want unless something dramatic happens very soon.

Fortunately, an end-time Bible prophecy reveals that God will use a human leader to temporarily save His people from being destroyed, so they have one last chance to repent. “For the Lord saw the affliction of Israel, that it was very bitter: for there was not any shut up, nor any left, nor any helper for Israel. And the Lord said not that he would blot out the name of Israel from under heaven: but he saved them by the hand of Jeroboam the son of Joash” (2 Kings 14:26-27).

Millions of Americans are waking up to the threat that the radical left presents to the nation, but they still do not understand the root causes behind the crisis. The Bible reveals that the problems in America’s government are not caused by one man or a group of government officials. They are caused by the sins of the American people as a whole (Isaiah 1:4-7). Only repentance can prevent the sickness in America’s government from escalating into revolution.