The Trumpet’s publisher has 21 personnel in the Holy City digging, taping, writing and publishing—why?

By Brent Nagtegaal and Rachel Dattolo 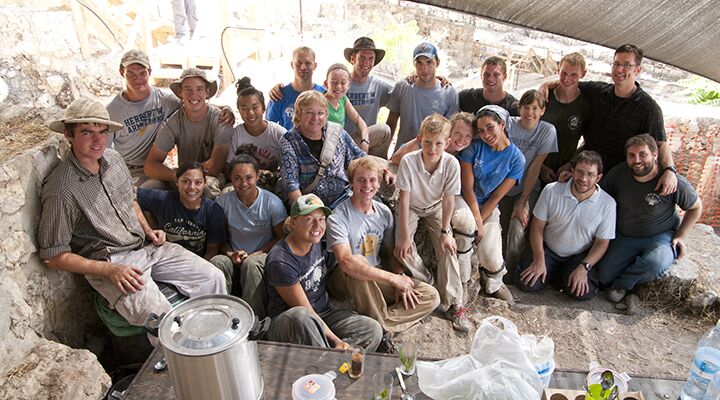 The Trumpet’s publisher has 21 personnel in the Holy City digging, taping, writing and publishing—why?

By Brent Nagtegaal and Rachel Dattolo

On a quiet street in Jerusalem across from an open field stands a large, stone-faced house. Green-shuttered windows and doors and numerous balconies adorn the three-story building, and a burst of fiery magenta flowers climbs over a small stone wall by the street. The faint sounds of the city filter through the otherwise serene atmosphere. This is the home of the newest enterprise for the publisher of the Trumpet newsmagazine: the Philadelphia Church of God’s Jerusalem office.

On May 30, Trumpet executive editor Stephen Flurry, his family and five Herbert W. Armstrong College students and alumni arrived in Jerusalem. Their mission: establish a regional office for the church, a branch of the college and a base of operations for Trumpet reporting on location. Since then, the pcg’s work in the capital of Israel has grown in numbers and in impact. It now includes a crucial involvement in one of the area’s most important archaeological projects.

A History in the Holy Land

The Philadelphia Church of God and its predecessor, the Worldwide Church of God, have had a lot of involvement in Israeli Jerusalem archaeology almost since the very beginning.

After Israel won the Six Day War in 1967, it gained control of Jerusalem, Judea and Samaria. This greatly expanded the areas available for archaeological exploration. One of the first excavations to commence took place along the southern wall of the Temple Mount. It was conducted by Prof. Benjamin Mazar, director of the Israel Exploration Society and former president of Hebrew University.

Herbert W. Armstrong was the founder of the Worldwide Church of God and of Ambassador College, a liberal arts institution located in Pasadena, California. When he heard about the new excavations in the heart of Jerusalem, he visited the site and soon realized he wanted to be a part of uncovering the walls and artifacts of the Bible. Immediately he proposed that Ambassador College help fund the excavation and provide volunteer labor during the summer months.

Soon after, Professor Mazar and Prof. Joseph Aviram, the current head of the Israel Exploration Society, accepted Mr. Armstrong’s invitation to visit the Ambassador students in California. Though the archaeologists had turned down three other major American universities seeking involvement in their project, they now offered Ambassador College a 50/50 joint participation.

The next year, more than 70 Ambassador students spent their summer excavating the Ophel alongside Israeli workers in the “big dig.” The joint project would continue for a decade, and hundreds of Ambassador students would have the opportunity to touch those ancient stones.

In addition to sending over what were praised as the excavation’s most enthusiastic laborers, Ambassador College shouldered half of the cost of excavations alongside Hebrew University from 1968 until the conclusion of the dig in 1976.

After years of labor and research, the big dig yielded artifacts that were dated to the First Temple period in the seventh and eighth centuries b.c., during the time of the temple originally built by Israel’s King Solomon.

During Benjamin Mazar’s excavations in the shadow of the Temple Mount, a young girl frequented the dig site, asking questions, rubbing elbows with archaeologists, spending time with the Ambassador students and taking a keen interest in the work. Her name was Eilat.

In 1986, digging recommenced on the Temple Mount. This time, it was Eilat Mazar, the professor’s granddaughter, who headed the project. The younger Mazar focused on the First Temple period at the eastern part of the site. Throughout the 1990s, she continued in the spirit of her grandfather’s work.

Meanwhile, back in the United States, Mr. Armstrong died in early 1986. The leadership that took over Ambassador College discontinued Mr. Armstrong’s work and his vision—in Jerusalem and worldwide. Ambassador’s participation in Israeli archaeology ceased. In the mid-’90s, the college closed altogether.

In 1989, Gerald Flurry, an Ambassador graduate, decided that Mr. Armstrong’s vision and mission should continue, founding the Philadelphia Church of God in Edmond, Oklahoma. The church established a small cultural foundation in 1996, and a small college in 2001. The Armstrong International Cultural Foundation and Herbert W. Armstrong College endeavor to fulfill the same philanthropic and service-oriented goals that Mr. Armstrong strived for with Ambassador.

In August 2005, Dr. Mazar made a shocking announcement. Her team had been digging the northern part of the ancient city of David in East Jerusalem and had unearthed the remains of a large public building dating to the 10th century b.c. Dr. Mazar believes the evidence shows that this structure was none other than the palace of King David.

The following year, Herbert W. Armstrong College offered its support to Dr. Mazar’s work, sending a handful of students to assist with the excavations.

Dr. Mazar still remembered the close relationship between her grandfather and Mr. Armstrong. “Without the support of Mr. Armstrong and the Ambassadors, the Temple Mount excavations would have never become, as it did, the most important and largest excavations in Israel at that time,” she said, adding that she was “excited to have the ambassadors back with us.”

Over the past six years, Herbert W. Armstrong College has participated in several phases of Dr. Mazar’s excavations in Jerusalem, helping to make a string of remarkable discoveries.

In addition to the remains of what appears to be King David’s palace, Dr. Mazar and her team discovered that the Stepped Stone Structure in the City of David actually connects with the palace above, proving that the two were built at the same time.

Later in 2007, while excavating a tower adjacent to the palace, Dr. Mazar discovered that what had long been considered a Hasmonean fortification was actually constructed during the time of the biblical Nehemiah.

In the last week of that year, Dr. Mazar’s team also found a bulla (a clay seal impression) of Gedaliah the son of Pashur, one of Jeremiah’s accusers mentioned in Jeremiah 38:1. In 2005, Dr. Mazar had found another bulla, stamped with the name Jehucal, who is also mentioned in the same verse. Both of these seals are currently on display in Armstrong Auditorium in Edmond, along with dozens of other First Temple-period artifacts.

In 2008, the team discovered a water tunnel more than 150 feet long that might have been the conduit King David’s forces used to conquer the city in the 10th century. Dr. Mazar called the excavation of the tunnel an almost entirely “Armstrong College enterprise.”

In late 2009 and early 2010, Armstrong College students helped Dr. Mazar uncover walls in what is believed to be a royal complex built by King Solomon. The city wall, located in the Ophel, is estimated to be more than 200 feet long and almost 20 feet high.

In August 2012, Mazar resumed excavations on King Solomon’s complex at the Ophel, and Armstrong College students returned to Jerusalem again to help.

In March, Herbert W. Armstrong College announced it would send 19 students and alumni to Jerusalem for the summer to assist Eilat Mazar in the second phase of her excavations at the Ophel. It was to be the largest wave of students the college had ever sent to Jerusalem. But a summer dig was not to be. Authorities denied the excavation license, the dig was postponed, and students remained grounded in Oklahoma.

Two months later, however, a crew of nine came to Jerusalem with a different focus: establishing a regional office as a base for reporting on location from the most important city in the world. The pcg team focused on researching, newsgathering, writing, scripting, podcasting and videotaping to produce content for theTrumpet.com. The crew reported on local press conferences and filmed Trumpet Daily episodes and other video content at historically significant sites in Israel. The office gives the Trumpet a sharper perspective, reporting directly from the focal point of the Middle East and of Bible prophecy.

Within a matter of weeks after the team set up in Jerusalem, Dr. Mazar called with news: The license was in hand, and the dig was on again. Back in Edmond, 12 more students and alumni packed their bags for Jerusalem.

When the second wave of students arrived on August 14, the framework was in place to roll them right into the production; the added students could significantly increase the content that the office was producing. Now, 17 students and alumni are part of the writing and video production crew.

The fact that the dig would now run through the school year also necessitated a branch of the college being established in Jerusalem.

The up-and-running office was well equipped to handle the influx, with adequate office and meeting space at the main building for the Trumpet and Armstrong College classes, along with accommodations for the Flurry family and the female student volunteers. A second apartment around the corner houses male students and alumni, and a third apartment accommodates the alumni women.

With the commencement of the 2012 Ophel excavation, the college has its largest presence in Jerusalem ever, with 21 representatives working on the excavation and in the office. The college is the only organization supplying volunteers to Mazar’s excavation, and the manpower it supplies makes up about a third of the total workforce on the site.

Armstrong students wake early each morning to prepare for a full day of digging. Work at the Ophel excavation begins at 6:30 a.m. and ends at 2:30 p.m. The early work hours avoid the heat of the day, with short breaks scheduled every two hours.

The Ophel excavation is attached to the Davison Archaeological Park, immediately south of the Temple Mount. The area excavated during the first phase of the dig has been equipped with walkways and informative signs enabling tourists to view the ruins that have been unearthed so far.

Armstrong students also spend some of their day in class learning skills related to the project. They attend Hebrew class, where they are tested on their individual study of an audio language learning course. They also attend a weekly course on archaeological history and skills taught by Brent Nagtegaal, an Armstrong College alumnus and area supervisor on the Ophel excavation.

“The participation is not something regular,” Dr. Mazar said, referring to Armstrong students at the dig. “It’s not like coming, volunteer, excavate, go home. You’re really taking part, actual part—not just excavating, [but] learning the archaeology of excavating. [T]he contribution is educational; intelligence is part of it.”

After several months on the dig, some of the students, she went on to say, have become “professional by now … to be an actual archaeologist, with great experience.”

This Phase Is Different

During Dr. Mazar’s first phase of the Ophel excavation, much of the area had already previously been excavated by her grandfather. Even so, she found several important artifacts, including 12 pithoi (large earthen vessels) and the oldest written document ever found in Jerusalem to date. This second phase, however, expands the search to areas that have never been excavated before.

Stephen Flurry said the excavation was also different in that the college has a unique partnership with Dr. Mazar and access to publicizing the news of the dig. As part of their work-study program in Jerusalem, students are producing content relating to daily life on the dig and posting it at www.keytodavidscity.com.