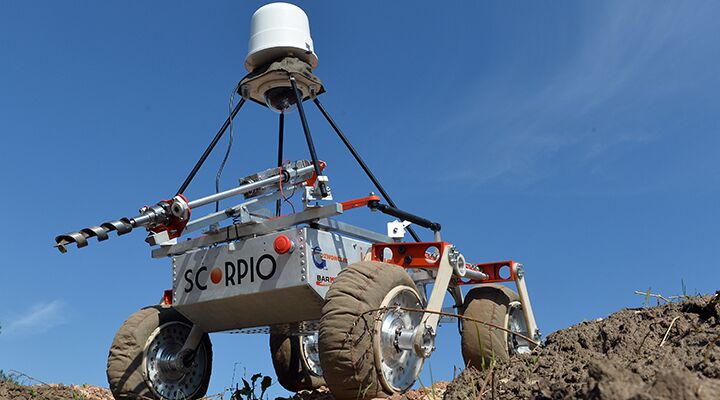 Nasa landed a nuclear-powered robot car with a rock-zapping laser on the surface of another planet using a sky crane. It sounds like science fiction. It’s actually science history—the rover touched down on August 5.

There is intelligent life after all—it’s back here on Earth. And the mission to send Curiosity, the six-wheeled Mars Science Laboratory, to the Red Planet is one of its greatest technical achievements.

Curiosity traveled 354 million miles, the equivalent of driving around the Earth’s equator more than 14,000 times. As it neared Mars, it was traveling at 13,000 miles an hour—fast enough to fly from London to New York in just over 15 minutes. Entering the Martian atmosphere, its heat shield was blasted with temperatures higher than 3,600 degrees Fahrenheit.

To land safely, Curiosity had to decelerate from 13,000 miles an hour to a standstill in seven minutes—without damaging its robotic arm, laser, spectrometer, cameras, radiation detectors or other equipment. Radio signals from Curiosity take 14 minutes to reach Earth, so the landing had to be completely automated. Scientists wouldn’t even know that Curiosity had hit the atmosphere until seven minutes after it had already touched down—or crashed.

The atmosphere slowed the rover down to “only” 1,000 miles per hour. Then the craft deployed its “super-chute.” Still traveling faster than the speed of sound, the 50-foot-wide chute deployed, slowing the streaking craft down to 200 miles per hour. Explosive bolts released the chute, then eight rockets blasted to life. The craft dodged the newly released parachute, and the descent slowed further.

But the rover couldn’t land using the rockets: The dust cloud would have damaged its instruments. Instead, a sky crane held aloft by rockets floated above the ground and lowered Curiosity down by tethers onto the Martian surface.

Then nasa really showed off. The whole mission was perfectly timed so that the Mars Reconnaissance Orbiter, which reached the planet six years ago, was overhead to take a photo. The orbiter’s controllers had to upload their final commands 72 hours before the picture was taken. If the orbiter took its picture one second too late, it would have completely missed the rover and simply photographed the lonely Martian desert. But it didn’t.

Wil Wheaton, who narrated a video of the rover’s landing, wrote: “Gene Roddenberry always talked about how amazing humans were, because we could do amazing things when we worked together. He was right.”

Yes, he was. Human beings are incredible. Our remote-control rover is leaving tracks on Mars right now.

The Mars mission brings to mind both the dramatic strengths and the tragic weaknesses of our human minds.

Consider the paradox here: The human mind can surmount thousands of technical problems and land a perfectly functioning, high-tech, remotely controlled robot on another planet.

Why, then, cannot humanity’s best minds solve poverty? And end war? Surely getting along with one another can’t be much more complicated than vaporizing Martian rocks with lasers?

Man “is limited in knowledge to that which may be transmitted into the brain through the physical senses of sight, hearing, tasting, smelling and feeling,” Herbert W. Armstrong wrote in his magazine, the Plain Truth, predecessor of the Trumpet. “Man’s most serious problems are spiritual in nature. But man is naturally confined to thinking solely in terms of the physical and material. He cannot grasp or comprehend spiritual problems or spiritual knowledge.”

That’s why human beings can solve some of the most complicated technical problems out there, but cannot bring peace to our own homes.

On a physical level, man has “a God-type mind,” Trumpet editor in chief Gerald Flurry has said. It’s a “mind power that ought to just stagger us in wonder and awe.”

The accomplishment of nasa’s Mars rover team is staggering. It is one spectacular example of incredible God-type minds at work!

Mr. Armstrong wrote that the “human mind’s capacity for material accomplishment seems unlimited.” As God looked down on mankind working together at the tower of Babel in antiquity, He said, “nothing will be restrained from them, which they have imagined to do.” God agrees with Gene Roddenberry: Humans can do amazing things when they work together.

But God had to stop mankind at Babel. He effectively jammed their communications and decentralized them. Why? Because when man uses his brilliant human mind and his five senses, he only brings himself closer to destroying others and himself. Without the vital spiritual dimension of knowledge, man can still build towers and rockets—but he cannot bring peace.He cannot stop crime, hatred, perversion or hopelessness. He hasn’t even really gotten a handle on famine, epidemics or poverty.

In 2004, nasa landed the Spirit rover on Mars. The scientists had reached the Red Planet with a piece of machinery, but, as Mr. Flurry wrote at the time, “[C]an scientists and engineers transform that wasteland into a Garden of Eden?” As stunning as our technical achievements have been, enlivening a dead planet is still quite beyond our scope. And even if we did have the ability to eventually develop that technical capacity, we are already close to wiping ourselves off our own planet. We wouldn’t survive ourselves long enough to beautify another!

The physical part of our God-type minds can do incredible things. But the spiritual part is much different. The part responsible for living in harmony, building character, working together and making the world a beautiful place—that spiritual component is dreadfully askew.

On Earth, man’s warped spiritual mind brings death and destruction—not life—to his surroundings. The same would be true on Mars.

Before we could ever think of succeeding at populating another planet, we would first need to change human nature.

The wonderful news is that human nature will change!

God promises that He will give mankind that missing spiritual component, and soon! First, man will need to learn just how deficient, how incomplete, his mind is without the spiritual dimension from God. Then God will make it so that “the earth shall be full of the knowledge of the Lord, as the waters cover the sea.”

When mankind is willing to listen, God will show the world the way to peace. He will give it the spiritual answers to its problems and the will to provide the crucial component that is so conspicuously absent from intelligent life here on Earth: His Holy Spirit (1 Corinthians 2:11-14).

When mankind finally receives this missing spiritual component, just think of what we will be able to accomplish! What will we achieve when this entire world is working together, using all of humanity’s God-type minds in harmony? Not only will it be a utopia of happiness and joy, but we will also accomplish feats that will make the Mars rover seem like a toy.

“Mankind is destined to remove that decay from Mars and the entire universe!” Mr. Flurry wrote. “It’s hard to even imagine what a direct and strong connection mankind has to the universe. We will make the universe look like the Garden of Eden! That is man’s destiny—and you can prove it from the Bible” (Trumpet, February 2004).

Man already has a God-type mind on the physical level. God plans on adding to that, giving man a God-type mind on the spiritual level, as well. He wants to create His perfect mind in mankind! In fact, the Bible states that God is creating His character in mankind so that He can ultimately transform men into members of the God Family! Then the God Family will revolutionize the universe.

That is why man has a God-type mind, on the physical level, today. That is why man can create amazing things like the Mars rover. And that is why these amazing accomplishments arenothing compared to the real potential of mankind’s incredible mind.