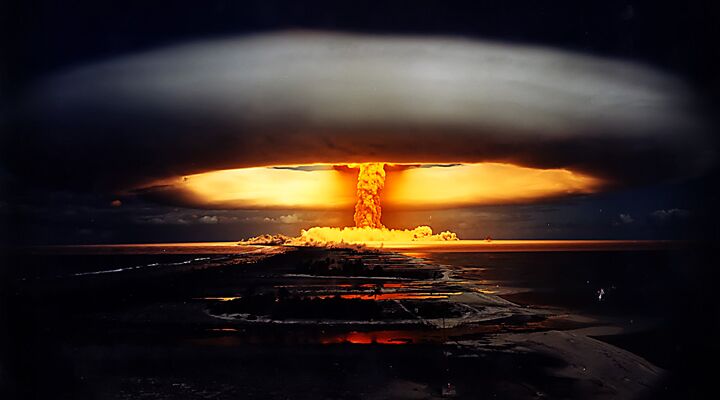 A whole lot of people believe civilization is about to end. About one in seven think it will happen in their lifetime. Maybe that sounds extreme, but sometimes you look around and wonder what the other six are thinking. It’s getting harder to deny the weather upsets, economic instability, societal breakdown, armed conflict and overall tottering world order.

Are you one of the billion people thinking the world will end before you do?

For many people, it’s not just world events that are raising alarm bells: It’s also an apocalyptic prophecy contained in the ruins of a pre-Hispanic civilization in Mexico. The same Reuters poll that found one in seven people think the world is about to end also revealed this:One in 10 people globally believe the Mayan calendar could mean civilization as we know it is crashing down this year.

This belief has been around since a stone tablet was found in the 1960s at a Mexican archeological site. It describes a Mayan god returning at the end of a time cycle, believed to be Dec. 12, 2012. Last November, an additional Mayan artifact was found with apparently the same date mentioned, fueling additional concerns. Various Mayan ruins have drawn a surge in tourism this year to the tune of tens of millions of people.

Are you one of the several hundred million people who find plausibility in this prophecy?

Many ideas about end-time prophecy are contradictory and confusing. Even those who think the end is near are very divided about how it will come about.

What do you believe? This is a serious question—a question of life and death.

Prophecies about the end of the world have been around for millennia. Countless of them have set specific dates—dates that have come and gone without incident (sidebar). Scoffers have plenty to scoff at. The field of end-time prophecy has been filled with false prophets.

So is prophecy itself a crock?

The details of the Mayan calendar prophecy are particularly unusual. If the Internet is to be believed, it predicts unusual geographic or astronomical activity: a shift in Earth’s rotational axis—violent solar flares—curious planetary alignments—catastrophic earthquakes and/or tidal events. One story has an invisible planet named Nibiru spinning into our solar system and colliding with Earth.

Hollywood has capitalized on the buzz with big-budget, special-effects-laden disaster films like 2012 (“Mankind’s earliest civilization warned us this day would come,” the trailer says).

The predictions of calamity are offset by other, more hopeful interpretations of the prophecy: that December 12 is more a new beginning than it is an end; that life will go on, but differently, in some kind of new spiritual phase; that spiritually and technologically advanced extraterrestrials will revitalize the planet and educate humankind in the ways of peace.

Is there any validity to these proclamations? If so, how? What is its foundation? What, really, is the basis for people’s faith in this prophecy?

There are several problematic aspects of this story. First, many sources have revealed common misunderstandings of the prophecy and its culture of origin. The “Stone of the Sun,” which has been credited as the source of the Mayan prophecy, was actually a creation of the Aztecs some half a millennium later and miles away from the Maya. The popular conflation of these two distinct cultures has added to the confusion.

The Mayan calendar includes overlapping cycles of time, and 2012 happens to be a date where several of these cycles reset. However, Mayan experts dismiss the notion that this anticipates some form of cataclysm; instead, it is simply a logical outgrowth of the Mayans’ complex mathematical formulas. In fact, an ancient Mayan painting uncovered this past May shows calendrical calculations that progress well beyond 2012.

More fundamentally, however, the question remains how a group of people a millennium and a half ago could make such a prophecy accurately. Why are people suddenly putting so much stock in the utterances of the ancient Mayans? However impressive their mathematics or astronomy skills, how could the Mayans predict a collision between planets so far in the future—particularly since one of them has yet to be detected? What evidence is there that Bolon Yokte, the god who is supposed to return in December, even exists?

nasa has weighed in with scientific proof that there will be no unusual astronomical alignments or collisions with planets this December. It also has proven that the worst effects of a pole shift would be that we would have to recalibrate our compasses.

Soon, December 2012 will come and go, and a collection of stories will hit the media about yet another failed prediction of the world’s collapse. Some people will feel foolish for ever having believed, and skepticism over such prophecies will get a boost. Then, in a short while, another colorful prediction of apocalypse will begin to capture the public’s attention.

False prophecies are abundant. But would you believe that there is actually one reliable, verifiable source of prophecy that has a proven track record of accuracy?

It is the most accurately copied and painstakingly preserved book from ancient times we have. It is totally unique among other so-called sacred texts: It claims to be the infallible revelation of truth given by the Creator and Ruler of the universe. It repeatedly quotes this Being, speaking in the first person—and actually asserting that He alone has the power of prophecy.

And it actually contains many prophecies that have already come to pass. Its history of correctness gives substantial credence to those forecasts that have yet to take place.

This source is the Holy Bible. And the author of the prophecies is the Creator God.

What is the basis of this prophetic power? Pagan mysticism? Good guessing? No—it isdivine omnipotence: the power to proclaim major, earthshaking events in advance of their happening—and then to actually bring them to pass, even millennia later!

Did a human being write this? “I am God, and there is none like me, Declaring the end from the beginning, and from ancient times the things that are not yet done, saying, My counsel shall stand.”

That is quite a boast. The Being who uttered these prophecies has put His reputation on the line.

Prophecy is, in fact, a most compelling proof God offers both of His existence and of the Bible’s veracity and authority. His Word never fails. True Bible prophecy is 100 percent reliable.

As Jesus Christ said in the midst of His famous Olivet prophecy, “Heaven and earth shall pass away, but my words shall not pass away.” On another occasion He said, “The scripture cannot be broken.” Jesus also said, “I have told you before it come to pass, that, when it is come to pass, ye might believe.”

Prophecy shows that God is in control. He is ensuring that certain events transpire precisely according to His master plan—even to the point of setting up and toppling kings, making and unmaking nations! Only the Almighty God has the power to do so. He does everything with purpose. He has an ambition—and the will to see it through. The essential message of prophecy is that God rules.

Did you know that one third of this best-selling book in history is devoted to prophecy?

It includes prophecies of the rise and fall of future cities, nations, empires—of successions of eras and epochs—and, yes, even of the end of our present civilization and its replacement with a better, more peaceful one.

Mayan beliefs may echo some of these prophecies, but the Bible is the genuine article. Do the people expressing faith in the Mayan calendar really believe in the almighty power of Bolon Yokte?

The God of the Bible actually challenges anyone out there to do what He has done. The Moffatt translation of Isaiah 41:21-24 reads, “Now, the Eternal cries, bring your case forward, … state your proofs. Let us hear what happened in the past, that we may ponder it, or show me what is yet to be, that we may watch how it turns out; yes, let us hear what is coming, that we may be sure you are gods; come, do something or other that we may marvel at the sight!—why, you are things of naught, you can do nothing at all!”

When false prophecies fail and are exposed as frauds, do not let that shake your faith in the one source of true prophecy! Jesus Christ gave specific signs—not a date, not an hour, but descriptions of general conditions and particular events—for His followers to watch for signaling the end of this age—and those signs are all around us! “When ye shall see all these things,” He said, “know that it is near, even at the doors. … Watch therefore, for ye know not what hour your Lord doth come.”