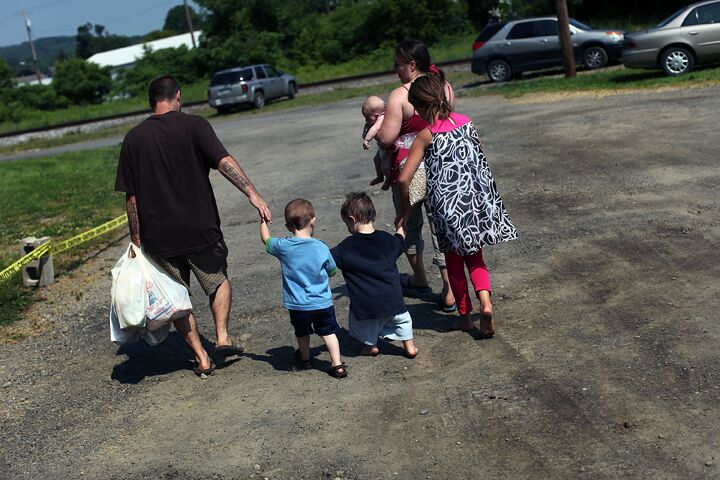 The ranks of America’s poor are on track to climb to levels not seen in 50 years, reports the Associated Press. Essentially all improvements against poverty since the 1960s will be lost.

Poverty rates are calculated by the Census Bureau. The Census figures for 2011 will be released in the fall, just weeks before the November elections.

After surveying economists, think tanks and academics—both nonpartisan and those with either liberal or conservative outlooks—there was a broad consensus of opinion that the poverty rate will rise from the 2010 figure of 15.1 percent to 15.7 percent.

Even though some of those surveyed expected a more modest gain, we must understand that even a 0.1 percentage point increase puts poverty at the highest level since 1965.

Alarmingly, poverty is spreading across many groups of Americans. Included in the number are underemployed workers, suburban families and, of course, the poorest poor. Yet there is a new poor—all those discouraged workers giving up on the job market and hoping their unemployment benefits don’t run out.

Suburban America is seeing increases in poverty. Three hard-hit areas are the political battleground states of Colorado, Florida and Nevada. Many voters in these states are now coping with the new norm of living hand to mouth.

Since 2000, large swaths of Jefferson County, just outside Denver, have seen poverty nearly double. The failed economy is certainly one cause behind this increase.

The Associated Press recounted the history of one Jefferson County suburbanite. “I grew up going to Hawaii every summer. Now I am here, applying for assistance because it is hard to make ends meet. It’s very hard to adjust,” said Laura Fritz, 27, of Wheat Ridge, Colorado, describing her slide from rich to poor as she filled out aid forms at a county center.

Fritz grew up wealthy in the Denver suburb of Highlands Ranch, but her financial security faltered after her parents lost a significant amount of money in the housing crash. Left holding a half-million-dollar house, her parents began living on food stamps and Fritz’s college money disappeared. She tried joining the Army but was injured during basic training.

Now she’s living on disability, with an infant daughter and a boyfriend who can’t find work as a landscaper. They are struggling to pay their $650 a month rent with his unemployment checks. They don’t know how they would get by without aid as they hope for the job market to improve.

The specter of poverty is looming over millions like Laura Fritz who are likely to find themselves falling far short when government subsidies from unemployment insurance, Medicaid, welfare and food stamps diminishes.

This same week, the New York Times published an extensive article explaining that poverty can also come about as a result of “striking changes in family structure.”

The article compares the lives of two women—friends and work associates—and the economic inequality that exists because one woman is married and one is a single mother.

The Times reported on July 14, “The economic storms of recent years have raised concerns about growing inequality and questions about a core national faith, that even Americans of humble backgrounds have a good chance of getting ahead. Most of the discussion has focused on labor market forces like falling blue-collar wages and ravish Wall Street pay.”

But notice what researchers are now saying is one of the primary causes of poverty. The New York Times reports that it is changes in marriage patterns—as opposed to changes in individual earnings—that accounts for as much as 40 percent of the growth in certain measures of financial hardship. It only makes sense that unmarried mothers with children have it a lot tougher financially.

Experts admit that the United States has always been a nation of economic extremes, yet they say it is also becoming a society of family haves and family have-nots, with marriage and its rewards evermore confined to the fortunate classes.

Here are some other compelling statistics discussed in the New York Times article:

Currently about 41 percent of births in the United States occur outside of marriage, which is an incredibly steep rise over the 17 percent of just three decades ago.

Across Middle America, single motherhood has moved from an anomaly to a norm with head-turning speed. Motherhood outside marriage is growing fastest in the lower reaches of the white middle class.

Income gaps are widening between the upper, middle and lower middle classes. The growth in single parenthood in recent decades accounts for 15 to 25 percent of the widening income gap.

Forty years ago, the top- and middle-income thirds had virtually identical family patterns—more than 95 percent of households with children in both tiers had two parents in the home. Today, 88 percent at the top have two parents while just 71 percent do in the middle.

As the New York Times brings out, in many cases poverty is a result of lifestyle choices—and specifically whether or not you are a single parent.

There is a way to escape poverty, even in these tough economic times. Either download or write for a copy of Solve Your Money Troubles! and be sure to read “Ending the War on Poverty” from theTrumpet.com archives.