Margaret Thatcher brings a sad reminder of a better time. 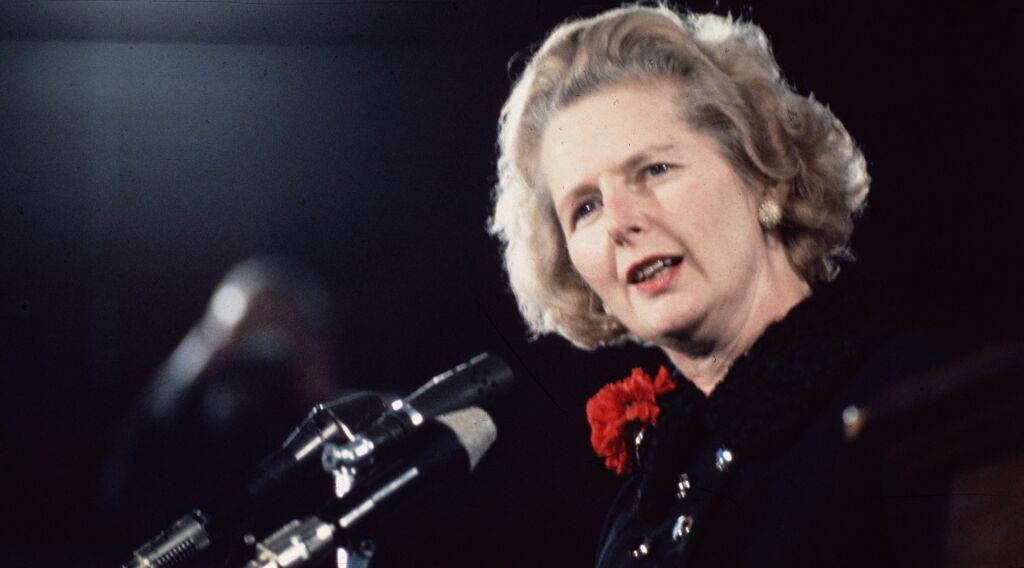 Margaret Thatcher brings a sad reminder of a better time.

Anything can seem normal and right if you have no basis for comparison. Take present conditions in the United States and Britain as an example.

There is a sense of right and wrong, but people are resigned that wrong is too widespread to condemn. There is talk of using military might to vanquish tyranny, but the real battlefield is the bargaining table, where tiny, violent countries milk concessions in exchange for promises to behave. There is occasional action, but it is weak, last-resort, not designed to achieve victory but to coax the enemy into resuming talks.

It all seems so normal and right—unless you speak of the past, and use it as a basis for comparison.

On February 25, former British Prime Minister Margaret Thatcher addressed 6,000 who had gathered to see her receive an honorary doctorate from the University of Oklahoma. She spoke of the past. In fact, it seemed as if she also spoke from the past.

Mrs. Thatcher had high praise for the United States. She praised us for our noble birth; the founding fathers who navigated the perilous unknown to wriggle free of restrictions on their religion. She praised the nation’s fundamental faith, its moral foundation, its commitment to justice and equity through rule of law.

The founding fathers believed that each person “was accountable to his God for his actions and for the use of his talents,” she said. “They knew all about the biblical injunction to look after your neighbor as yourself…. They suffered much, but their beliefs brought them through all adversity and infused the life of this new nation destined to become uniquely great—destined to keep liberty and justice and democracy alive at great times of difficulty.”

Yet, it could not be overlooked: It was a former United States Margaret Thatcher praised. For every bright word of praise that rang out in the stadium, what filled the echoes and the silences was the dim present.

Mrs. Thatcher lauded America’s passion for freedom. Not freedom from responsibility, but the freedom that comes from acting responsibly: freedom from tyranny and disorder. Then she reminded her listeners about the duty that comes with liberty and prosperity: the importance for individuals given the blessing of freedom to fulfill their accountability to God, to be rigorously governed by conscience; for free and wealthy nations to fight for the half of the world’s countries that are not free.

“Where there is not a rule of law,” she said, “there is a rule of corruption. It is not a rule; it is people taking some of the things and using them for their own purposes. Corruption takes over from integrity.”

In World War ii, Mrs. Thatcher said, America knew “they were fighting for all humanity in the cause of liberty, justice and democracy. What gave the peoples of our countries and others from the British Commonwealth the resolve and strength to fight through to victory? It was because, my friends, we knew that our cause was morally right. And that we had to fight for that moral rightness to prevail.”

“May I say that your president,” she said—was she now in the present?—“President Ronald Reagan, and I worked very closely together, because we know that peace is only preserved by we keeping strong and by having very advanced weaponry so that anyone who chooses to challenge our independence or those of our friends knows that we, with our forces and our latest equipment and our resolution, would always prevail.” Hers were the words of a stronger Britain, a superpower United States. They reverberated with the long-forgotten will to rule that made Britain an empire and brought prosperity to far-flung colonies through benevolent (albeit human and flawed) governance.

Similar words may be uttered by present leadership, but they are belied by paucity of action. In fact, the history that Mrs. Thatcher’s words evoked brings a sense of shame to today’s Britain. The present prime minister is eagerly dismantling vestiges of commonwealth. His small, uninfluential country is now unrecognizable as what it was a mere century ago: the world’s largest and most powerful empire ever.

Margaret Thatcher won her last election in 1986. She hasn’t been a former statesman for even a decade, and yet she represents a time long past. The era of Thatcher and Reagan has been wholly eclipsed by the era of Blair and Clinton—leaders with no connection to the history that made their countries great, supported by electorates without a memory. A fact became clear as Thatcher spoke: She would not be elected today.

“My friends,” she concluded, “the only guide to a man is his conscience. The only shield to his memory is the rectitude and sincerity of his actions. It is very imprudent to walk through life without this shield because we are so often mocked by the failure of our hopes. But with this shield, however the fates may play, we march always in the ranks of honor. May the great United States and United Kingdom and their peoples march always in the ranks of honor. That is the best service we can give to the world.”

Rectitude, honor, service—these, sadly, are bywords of a bygone age, bound up in the memory of this dignified, aging woman. If they were what enabled previous generations to march in the ranks of honor to national greatness, we should fear now that they are forgotten.