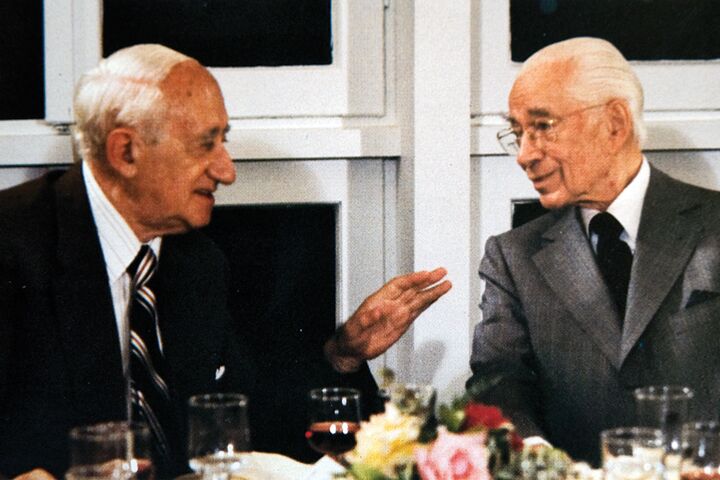 In 1968 Belgium’s King Leopold and Japan’s Prince Mikasa met with this modern-day patriarch of peace and understanding among all peoples. That same year, Moshe Kol, one of the original signers of the 1948 Israeli declaration of independence, spoke before parliamentarians at the Knesset proposing the building of “an iron bridge” connecting Hebrew University and Ambassador College.

Following the introductions to Belgium and Japanese royalty, Israeli President Zalman Shazar was the very first head of state to receive Mr. Armstrong. During their historic meeting, Mr. Armstrong “made the promise on that occasion that there would be an iron bridge established” (Worldwide News, Dec. 23, 1974).

With this in mind, as minister of tourism, Mr. Kol introduced the evening by calling Mr. Armstrong “an outstanding personality, with wonderful connections all over the world.” He noted Mr. Armstrong’s role as founder and chancellor of Ambassador College. To the banquet guests he cited the prominent twin travels of U.S. Secretary of State Henry Kissinger attempting to quell national tensions and those of Mr. Armstrong “building bridges of goodwill” internationally in the spirit of humanitarianism, proclaiming coming conditions of world peace.

As evidence, he highlighted the close relationship between the guest of honor and Jerusalem excavations, directed by Prof. Benjamin Mazar, in the Jewish Quarter led by Professor Avigad, and near Hadera in consort with Japanese professors of archeology.

Associate activities with the International Cultural Center for Youth in Jerusalem, Beit David, located in Jerusalem’s Old City, and educational projects bringing young people together from Christian, Muslim, Arab, Armenian and Jewish backgrounds, were also championed by the minister as he additionally recognized the honored guests and Mr. Armstrong’s benevolence in their countries, hastening to add that his “involvement, I would say, in Israel is maybe more than in other countries” (ibid).

These recognitions were even more meaningful in light of the absence of Mr. Armstrong, who had become ill moments before the event began. That morning, President Ephraim Katzir received Mr. Armstrong, and in the afternoon he toured excavations of the archeological projects in Jerusalem, returning to his hotel in Tel Aviv just prior to the start of the banquet.

Mr. Kol told the distinguished audience that “we decided, because we heard about this only 6 o’clock that he is in bed, that we will not cancel the evening, but because we came here to honor him and his work and everything, what he is doing here, and we will send him from here greetings for a speedy recovery to continue his wonderful work in the world, in our region, and in Israel” (ibid).

In continuation of that honored legacy, Gerald Flurry, founder and chancellor of Herbert W. Armstrong College as well as chairman of the Armstrong International Cultural Foundation, has worked to continue the “iron bridge” between these humanitarian institutions and counterparts in Israel. He has traveled extensively throughout the country writing for the Trumpet and recording episodes for the Key of David program.

Currently, the foundation supports various activities in Israel such as maintaining the Liberty Bell Park in the center of Jerusalem, which was a special project originally undertaken by famed Jerusalem Mayor Teddy Kollek and Mr. Armstrong. Additionally, Mr. Armstrong led the foundation in strengthening bonds with the city’s mayor, officials of government, education, music, sports, media, archaeology, and those engaged in humanitarian efforts. For more about this historic collaboration, request a free copy of A Warm Friend of Israel, published by Mr. Flurry. It chronicles the long and storied friendship between the leaders and citizens of Israel and Mr. Armstrong.

The revival of this partnership through the Armstrong International Cultural Foundation has most notably been evidenced by the exclusive premier exhibit at Armstrong Auditorium of historic finds from the palace of King David, discovered by acclaimed Israeli archaeologist Dr. Eilat Mazar, granddaughter of Prof. Benjamin Mazar. Evidence of the legacy of Professor Mazar’s long friendship and cooperation with Mr. Armstrong and aicf is now being perpetuated via the connection between Dr. Eilat Mazar and the foundation. The unique world premiere display of the seals of the ancient Prophet Jeremiah’s captors, as recounted in Jeremiah 38, at Armstrong Auditorium attests to this. Some of the most significant artifacts ever discovered in Jerusalem remain on display through October 16 this year in Armstrong Auditorium, America’s newest and finest performing arts facility. For supporters of the perpetuation of the legacy of the work of Mr. Armstrong, this is an exhibit you are encouraged to visit in person.