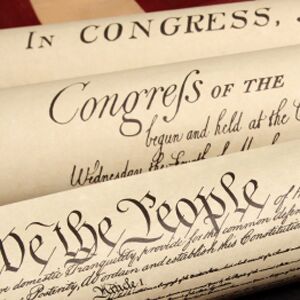 The government is operating under a flawed understanding about human nature.

The difference between these two opposing views forms the heart of a crisis in the United States right now.

Thankfully, America’s Founders took the latter view. As a result, the system of government they created has stood for over two centuries and done much to guarantee the nation’s success.

In the Constitution, the American Founders established a system that successfully governs the government.

The fundamental means by which the Constitution accomplishes this are representation, separation of powers, and limited government. The first of these puts the ultimate power in the hands of voters. The second lies in the checks and balances the Founders created through interaction among three branches of government. The third comes in the form of enumerated powers. Article i, Section 8, of the Constitution outlines the duties of Congress; whatever is not listed there falls outside its jurisdiction, and it may not do. And the president—very unlike a monarch—is voted in, carries out his constitutional duties for a short four years, and then can be dismissed.

These fundamental restrictions—again, borne of a realistic understanding of human nature—have helped preserve freedom in America for over 200 years. And right now, they are the target of extreme attack.

The Constitution demands that, upon entering office, the president solemnly swear or affirm that he will, to the best of his ability, “preserve, protect and defend the Constitution of the United States.” It also says that “The senators and representatives, and all executive and judicial officers … shall be bound by oath or affirmation, to support this Constitution.”

Far too many of these leaders, since taking that oath, have done the opposite! And the current president has, to the best of his ability, smeared, ignored and undermined that founding document!

America’s most powerful leaders today fundamentally disagree with the charter they are meant to uphold! “It turns out that our Founders designed a system that makes it more difficult to bring about change than I would like sometimes,” President Obama lamented in a recent interview. Frankly, in their eyes, the limits the Founders imposed to protect the nation from human nature are obstacles preventing them from remaking the nation according to their own perverse ideals.

As Larry Arnn, president of Hillsdale College, points out, the seeds of this anti-law thinking were sown by Woodrow Wilson, who viewed the Constitution’s doctrines of limited government as obsolete. Notice the reasoning: “Wilson argued that progress and evolution had brought human beings to a place and time where we didn’t have to worry about limited government,” Arnn said. “He rejected what the Founders identified as a fixed or unchanging human nature, and thought we should be governed by an elite class of people who are not subject to political forces or constitutional checks and balances—a class of people such as we find in our modern bureaucracy. This form of government would operate above politics, acting impartially in accordance with reason” (emphasis added).

Here is the crux of it. This thinking trusts in human nature and human reasoning. It sees nothing that needs restraining. It is so confident in its own correctness that it seeks to operate above the law.

Today, it is plain to see the problems that such thinking—which has been fiercely taken up by the present government—can create.

Recall Mr. Obama’s interview in 2001 in which he criticized the Warren Court of the 1950s and ’60s for not being radical enough: “It didn’t break free from the essential constraints that were placed by the Founding Fathers in the Constitution,” he lamented. He bemoaned the Constitution’s being “a charter of negative liberties” that describes what the government can’t do to you rather than what it “must do on your behalf.”

Right after Mr. Obama was elected, the Trumpet’s editor in chief, Gerald Flurry, wrote on this subject. “The Founding Fathers created the Constitution to limit the government’s power because they had lived under a tyrant who decided, according to his own whims, what was fair for the people and what wasn’t. The Constitution gave them a certain protection from evil human nature. The founders based this charter on certain biblical principles, not just human reasoning,” he wrote in the January 2009 Trumpet.

Today’s most powerful leaders view this foundational strength of the Constitution as a flaw. And, the president’s frustration with those needful limitations aside, the government today is attaining remarkable success at aggressively undermining them and, in the process, trashing the Constitution.

The course that began with Wilson and blossomed under Franklin Roosevelt—that of transcending the limits imposed by the Founders and transforming the government into an ever more powerful guarantor of “positive rights”—is now reaching its apex.

Today the federal government acts, for example, as though citizens have the “right” to material goods—housing, education, healthcare—which of course gives the government the obligation to take resources from other citizens to pay for them. This represents an enormous increase in federal power at the expense of the rights and freedoms of individuals.

The president is bypassing the democratic process with growing impunity. The legislature is blowing past its constitutionally enumerated powers and continually expanding its mandate. And the judiciary is torturing the Constitution’s language to force ever more bizarre meanings into it, thus bringing it into conformity with its own liberal plans. These efforts are just getting started—and are quickly picking up steam.

These leaders are shucking off the constitutional system by which the government itself is properly governed. Why? Because of their basic, fatal misunderstanding of human nature, and the crucial need for all human beings—most especially those in power—to live by the law.

This rapidly exploding development calls to mind the darkest period in the history of ancient Israel—the period of the judges. As the nation turned its back on God and His law, it suffered curse upon nightmarish curse. Scripture uses a simple description of the moral and intellectual climate at that time—one that rings sickeningly true today: “Every man did that which was right in his own eyes” (Judges 21:25).

Quoting that verse in his 2001 article “Justice and Our ‘Evolving Constitution,’” Mr. Flurry wrote, “This was the condition of our biblical forefathers—just before their nation collapsed and they went into slavery!”

Watch for history to repeat itself.