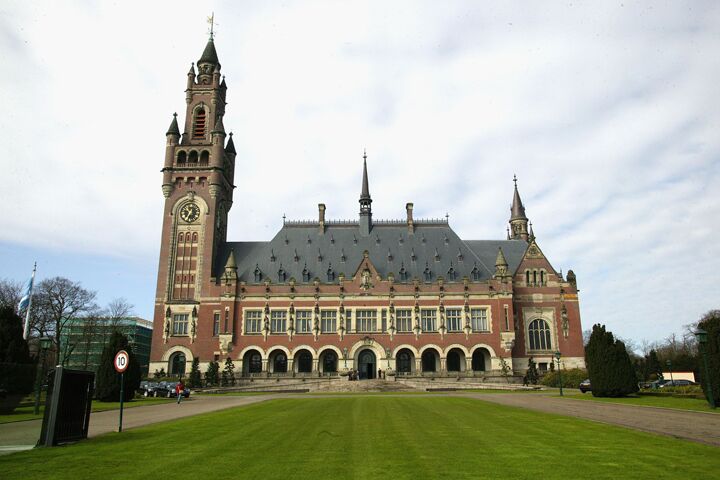 Did you know Germany is currently battling Italy in the world’s top court? The case centers on action taken by Italy that Germany deems unlawful. Europe’s most dominant nation wants to see rescinded certain Italian actions which the latter views as infringing “Germany’s sovereign immunity.”

In the case titled Germany v. Italy, public hearings have concluded, and the conflict has now moved into judicial deliberation by the elite of international judges. The case tracks back to actions by both Germany and Italy during World War ii.

This and other such battles between countries, along with their outcomes, continually unfold amid the spectacular architecture of the Peace Palace in The Hague, Netherlands. Here, for over 100 years, the world’s elite have sought peace through organized justice and arbitration. The backdrop of two world wars and hundreds of regional conflicts underscores the magnitude of the ambitious goal undertaken by its political architects and engineers of the past and the present.

History of the ICJ

During the closing days of World War ii, representatives of 51 nations met in San Francisco to lay the foundations of the United Nations and sign its present charter. They hoped it would, once and for all, provide a forum where nations could work out their differences at the conference table instead of on the battlefield.

A draft statute for establishment of a new court to resolve international disputes was submitted to the conference. This came in view of the Permanent Court of International Justice (pcij) being decentralized before the war and moved from The Hague, Netherlands, to Geneva, Switzerland. The war and its resultant aftereffects found leading nations pressuring for the court’s revival and invigoration.

Judges were elected to the icj on Feb. 6, 1946, at the UN’s first session in the General Assembly. Ironically, many of its appointed officials actually were re-appointees from the defunct predecessor and “there was a feeling in some quarters that the pcij formed part of an older order, in which European states had dominated the political and legal affairs of the international community …” (ibid).

On May 9 of that same year, 1945, while speaking to an audience of World Tomorrow listeners during that San Francisco conference, Herbert Armstrong warned of the looming illegality and injustice of the future political, economic and national hegemony in Europe of a domineering, rebuilt Germany, along with the Continent’s supreme religious power, in reviving for a seventh and final time the Babylonian-rooted Holy Roman Empire. Today we see Herbert Armstrong’s prophecy of that very situation coming to rapid fruition in Europe.

At the time, Herbert Armstrong had no opportunity to address the newly established icj directly. However, remarkably, within three decades he would find himself standing before the judges of this court delivering the very gospel message Christ declared in Matthew 24:14 and proclaiming the coming establishment of the supreme sovereignty of the government of Almighty God enacting the immutable law of God in place of the confusing system of the laws of man (Revelation 11:15).

It’s important to note that, over time, Mr. Armstrong developed a special friendship with one of India’s governing elite. It was through this relationship that it was later arranged for him to visit the country’s prime minister and president. It was here that the hinges of future open doors to the international court swung open for him.

“And just over a month ago, a man very high in the government of the second-largest nation—India—was our guest for a week on the Pasadena campus,” Mr. Armstrong wrote. “Twice he addressed our students. He is Dr. Nagindra Singh, executive secretary to President V.V. Giri, and delegate of India to the United Nations conference at Geneva. Also Dr. Singh is perhaps the leading exponent of ‘world peace through international law.’ He has six academic doctorates after his name—all earned degrees—from such universities as Cambridge, Moscow, Dublin, Delhi, Calcutta and Bihar, including the very rare and coveted D.C.L.” (co-worker letter, June 28, 1971).

Less than a year later, Mr. Armstrong again visited India and recalled, “[A]t New Delhi we were entertained twice at the home of the executive secretary to the president, Dr. Singh—and there we met two or three maharajahs, and the ambassadors from Chile, Argentina and Sudan, and we received invitations to visit their countries in South America and Africa” (ibid, March 26, 1972).

Herbert Armstrong and the ICJ

In 1973, Dr. Singh would be appointed as India’s second judge to the International Court of Justice and remain at the post 15 years, becoming the body’s president from 1985 to ’88. His friendship with Herbert Armstrong would continue through physical and spiritual test and trial.

As God continued to open doors for Herbert Armstrong to witness to the world, he worked on details for powerful personal appearance campaigns in Vietnam and the Philippines. It was during this time that some plans had to be cancelled due to a ministerial and member rebellion in the Church. Mr. Armstrong was forced to place on hold these vital open doors as he sped back to Pasadena to deal directly with the problems. It was a time of pressure and stress for the unofficial ambassador for world peace. A time when he directed the Church’s mind back to obedience to the very law of God—His commandments—His perfect judicial system.

While in office at the Peace Palace in The Hague, Dr. Singh found time to draft and send a powerful telegram of encouragement to his American friend: “Dear Chancellor Herbert Armstrong, Please don’t get worried about Church problems that face you. God is great and His will is supreme. Nothing happens without His decree. You have my sincerest prayer for successful resolution of your difficulty. God is with you and you will succeed. Nagendra Singh, Judge, International Court of Justice.”

Dr. Singh was right! God was with Herbert Armstrong, and he did succeed. Within a year of that crisis and rebellion against God’s law, which temporarily stopped him going to the world personally delivering God’s gospel message, the doors flung open for the heralding of that very law and its forthcoming implementation to the world’s highest court judges.

Witness to the World Court

During his visit to The Hague in 1975, a special luncheon was organized to introduce Mr. Armstrong and the work of the Ambassador International Cultural Foundation to various members of the World Court in addition to the ambassadors of India, Nigeria and Tanzania.

“Judge Nagendra Singh from India, judge of the World Court of International Justice, hosted a luncheon in my honor,” wrote Mr. Armstrong. “And that night I spoke at a banquet of upwards of 300 justices and wives, ambassadors from many nations and wives, local dignitaries in government, education and industry. Actually it was one of the most distinguished-appearing groups I have ever seen. A similar meeting will be held in Paris in October” (Pastor General’s Report, May 26, 1975).

Mr. Armstrong’s reference to the “distinguished” guest list was no overstatement. “In the evening Dr. Singh really managed to introduce us to the elite of The Hague. The ambassadors of the following nations were present: Japan, Tanzania, Egypt, Kuwait, Pakistan, India, Poland, Czechoslovakia, Morocco, Bulgaria, Romania, El Salvador, Belgium, Canada. There were also six representatives from the United States Embassy and six from the Russian Embassy, as well as other members of the International Court of Justice, including its president, His Excellency, Justice Lachs” (Bulletin, June 3, 1975).

Today, cases involving international law, such as Germany v. Italy referred to above, will continue on as nation strives against nation. Our regular readers know Germany will continue its domineering of Europe as declared by Gerald Flurry and Herbert Armstrong before him. Its claim to “sovereign immunity” will abruptly end upon total destruction of its own system of law by the chief legal mind of all minds (Daniel 2:44-45).

Mankind’s problem is that it has failed to identify the overarching law of God that it broke when transgressed nearly 6,000 years ago in the Garden of Eden. God declares in His Word that “sin is the transgression of the law” (i John 3:4). The law in question is the very law of God—His commandments codified in 10 principles covering every possible human infraction. God intended man to live by His law of love, of give, of outflowing concern one toward the other.

This is the law Herbert Armstrong spoke of to the world’s great judicial minds and dignitaries of the World Court. They were told! History shows they heard the messenger but did not heed the message, which actually was delivered by a messenger of God! Thankfully, very soon, mankind’s broken law and systems of arbitration will be replaced by the just, fair, unbiased, loving law of God, who without partiality, is the chief judge of all.

For legal light on God’s justice system, request Gerald Flurry’s booklet No Freedom Without Law in which our editor in chief writes, “People everywhere fight and strive for greater freedom. At the same time, they fight against law. That shows a dangerous misunderstanding of the nature of true freedom and the need for righteous law. The fact is, without law there is no real freedom. Do you have the attitude toward law that leads to real freedom?”