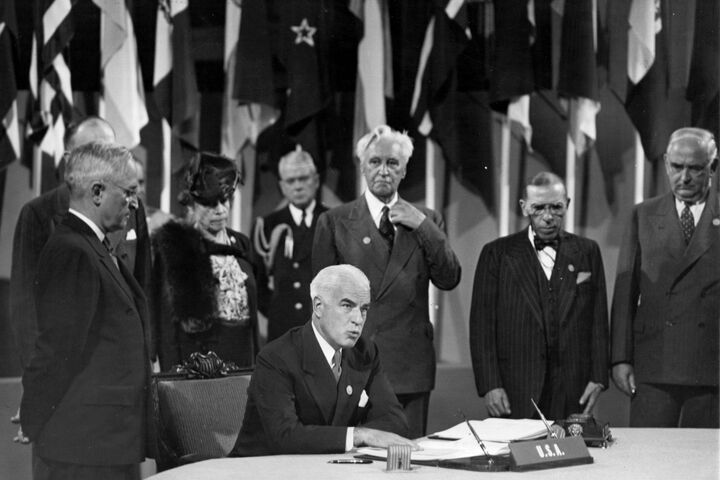 The United Nations’ greatest failure has been not preventing the prospect of a repeat performance of the war that spurred the UN’s creation.

San Francisco is a sight to see. From the majestic redwood giants of Muir Woods, to the jaw-dropping view from atop Mount Tamalpias revealing the spectacular panorama of the bay area on the fringe of a bustling labyrinthine city, historic Angel Island, fortress Alcatraz, the Golden Gate Bridge reaching out into the majestic Pacific Ocean—it all bespeaks the drama of one of the world’s great cities.

Just 66 year ago a very real and historical drama played out in downtown ‘Frisco.

Here, on the stage of the famed Herbst Theatre, the United Nations charter was signed.

During the closing days of World War ii, representatives of 51 nations met at that theater to lay the foundations of an organization that they hoped would, once and for all, provide a forum where nations could work out their differences at the conference table instead of on the battlefield.

On May 9 of that same year, 1945, while speaking to an audience of World Tomorrow listeners during that San Francisco conference, Herbert Armstrong warned:

The war is over, in Europe—or is it? We need to wake up and realize that right now is the most dangerous moment in United States national history, instead of assuming we now have peace!Men plan, here, to preserve the peace of the world. What most do not know is that the Germans have their plans for winning the battle of the peace. Yes, I said battle of the peace. That’s a kind of battle we Americans don’t know. We know only one kind of war. We have never lost a war—that is, a military war; but we have never won a conference, where leaders of other nations outfox us in the battle for the peace.We don’t understand German thoroughness. From the very start of World War ii, they have considered the possibility of losing this second round, as they did the first—and they have carefully, methodically planned, in such eventuality, the third round—World War iii! Hitler has lost. This round of war, in Europe, is over. And the Nazis have now gone underground. In France and Norway they learned how effectively an organized underground can hamper occupation and control of a country. Paris was liberated by the French underground—and Allied armies. Now a Nazi underground is methodically planned. They plan to come back and to win on the third try.

This time, it would not be a conflict where stony-faced, jackbooted storm troopers took Europe by armed blitzkrieg. Rather, the plan was for well-spoken, professional “businessmen” equipped with the weapons of a corporatist “Euroforce”—a three-piece suit and briefcase to match—to head the battle. The war initiated by the underground elites was to be one fought in corporate boardrooms, in restaurants, hotels, at political conferences, through international diplomacy and Germany’s well-entrenched secret service.

To attain their goals these elites would not only need to have a newly “democratized” Germany become an active member of the UN, but they would also require the establishment of their own European institution, a European Union, within which to fulfill their imperialist agenda. Such an enterprise, with the German economy as its engine and the German elites as its master mechanics, would be the ideal umbrella under which to peddle policies that worked specifically for the promotion of German interests, while appearing to be for Europe’s good.

The UN may be in many ways the best vehicle that man has been able to create to improve communications between nations, a forum within which, to put it in Churchillian terms, nations could “jaw-jaw rather than war-war.” Yet in spite of much dedicated and sincere effort, it has been unable to bring global peace. In fact, many of its institutions have been penetrated by those with a very opposite agenda. Today’s rearmed, united and independent Germany is even now seeking a permanent seat on the UN Security Council to aid in fulfilling its elites’ dream to revive and dominate a Holy Roman Empire.

Since the end of World War ii Europe has known over 70 years of peace. That is one of the longest periods without war in this continent’s stormy history. After the destruction of World War ii, Europe rebuilt into a powerful trading bloc. Patiently, behind the scenes, even before the defeat of their nation at the hands of the Western allies, an elite cadre of committed imperialists worked to ensure the resurrection and fulfillment of an old dream—the vision of a United States of Europe, in reality a literal resurrection of the old Holy Roman Empire. Part of their program, largely carried out during the years of Konrad Adenauer’s chancellorship, was to prepare another younger generation to fulfill that vision.

The spirit that has driven this project is cemented in a bond that ties Berlin to Rome. It always was so, over the centuries, with the periodic resurrection of the Holy Roman Empire. The leading bureaucrats, technocrats and corporatists who have worked so hard to fulfill this postwar imperialist dream of European unification under German political domination have been overwhelmingly Roman Catholic by religion and German by nationality. Many hail from or have strong links with German aristocracy. That aristocracy has strong “Holy Roman” roots.

Bible prophecy speaks of a future great northern power described as a “beast.”

“And they worshipped the dragon which gave power unto the beast: and they worshipped the beast, saying, Who is like unto the beast? who is able to make war with him?” (Revelation 13:4). After reading this verse, on June 24 Gerald Flurry declared to viewers of the Key of David program, “They worshiped. I mean this political organization and this religious organization (church and state together) actually worshiped ….”

Thus the prophecy of this resurrected empire reveals it has a strong spiritual component. But as to the effect of that spiritual influence, it is devastating! In fact, this continually resurrecting entity has a history of initiating crusading warfare!

In the same telecast, Mr. Flurry declared, “You can see why it’s so ferocious and fierce like no other animal on this Earth. You can see why, and I’ll tell you, this is so powerful that it’s going to make war, and it gets so powerful that the people that are a part of it, that see this monstrous war machine … think that no nation or groups of nations can make war with this kingdom or this beast or this power. They think no power on Earth would dare make war with this monstrous machine.”

Believe it or not, that is what is going to speedily emerge from the current euro crisis!

From the ashes of the last world war Germany has risen to a non-permanent seat on the UN Security Council. Its declared priorities for the Permanent Mission of Germany to the UN for 2011-2012 are listed as: Afghanistan; Chairmanship of the Al Qaeda/Taliban Sanctions Committee; Chairmanship of the Working Group Children and Armed Conflict; Non-proliferation of Weapons of Mass Destruction; and Environment and Climate Change.

Germany is the third-largest financial contributor to the UN. Its soldiers, police and personnel serve in regions of conflict in both armed and diplomatic missions as well as high-security briefs worldwide. The European Union currently pays 40 percent of the budget of the UN and has integrated its European Foreign Service as a key communicator and adviser to the UN.

On July 21, Europe’s master, Germany, succeeded in creating a platform for consolidating a majority of EU nations into a fiscal union. Pundits declared that this would cement together the European empire that Germany has always wanted.

We have repeatedly encouraged our readers to watch for the EU to be reduced finally to 10 leading nations fiscally, politically and militarily under the domineering control, in all these areas, of a German power in turn under the spiritual influence of Rome (Revelation 17:7, 12, 16).

Our editor in chief recently wrote, “Many experts believe the measures put forward on July 21 aren’t enough to fix Europe’s problem. The drama is definitely not over. Europe just took a giant leap toward becoming a German-led superstate, but expect this crisis to force Germany and Europe to take more radical steps toward unification.”

Today, bereft of any real power and any true authority, the United Nations acts as a paper tiger in an increasingly German-dominated hemisphere. The UN, and its principle architects, the Anglo-Saxon nations, have, even as Herbert Armstrong prophesied, effectively lost “the battle of the peace.”

Now, as those “radical steps” toward tighter unification are implemented in a Europe caught in the grip of crisis, the whole world waits on Germany to lead in providing a solution to the globe’s current financial bind. The one thing lacking with which to propel Europe forward into its final prophesied form, seizing on the opportunity which the current crisis affords, is political will. Historically, that has always come from dynamic leadership prepared to seize the moment and capitalize on it.

Europe, a continent in crisis, is a Europe in waiting for such a leader. A prophesied leader hailing from a nation of “fierce countenance” (Deuteronomy 28:50), a strongman, a führer, Europe’s Charlemagne of the moment! Who is he? Where is he? When shall he reveal himself?

One thing is for sure. Those who heed Christ’s command to “watch and pray” will not be caught by surprise when he is finally revealed (Mark 13:33; Luke 21:36). They will be those who participate in, and finally win, the real “battle for the peace”! (Revelation 19:11).