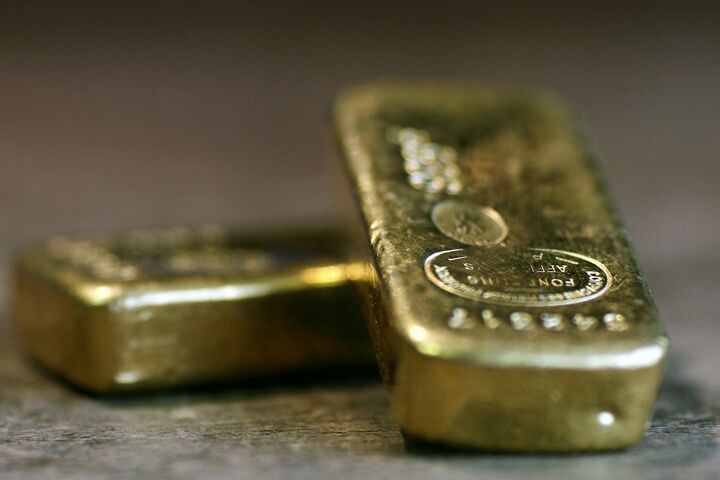 Euro or no euro, Germany is the sole nation with sufficient bullion to back a federal currency.

Gold skyrocketed to over us$1,800 an ounce on Tuesday. One nation gained powerfully as a result: Germany.

As the markets fixate on Europe, seeking to understand the complexities involved in Franco-German moves to stabilize the eurozone and hence the global economy, little attention has been paid to a crucial component of German power in this whole equation—Germany’s gold hoard.

It is intriguing to note the historical timing of Germany’s sudden acquisition of its post-unification gold hoard.

The forerunner of today’s European Central Bank, the European Monetary Institute (emi), once carried almost $27 billion in gold reserves. In 1998, the emi was replaced by the European Central Bank (ecb). No European Monetary Union financial data was published that year, while Europe’s elites “rebalanced” the financial system. When financial records resumed publication in 1999, $20 billion in gold had “gone missing” from EU coffers.

One would have assumed that these EU reserves should have been automatically transferred to the emi’s replacement, the ecb. No official explanation was ever given as to why it was not. It is interesting to note, however, that in that same year, the German central bank reported a $20 billion increase in its national gold reserves.

The result? Germany now owned 3,400 tons of gold—enough to back an entire currency if it wanted to!

As the late Christopher Story, a former adviser to British Prime Minister Margaret Thatcher, observed: “The Bundesbank suddenly acquired massive gold reserves, just as the euro was launched in the first quarter of 1999. The gold amassed, both in terms of its physical size and of its value (national valuation basis) is more than enough with which unilaterally to introduce a gold-backed ‘new deutsche mark’—in contrast to the U.S. dollar, which is not backed by gold” (Economic Intelligence Review, March 2000).

Coincident with this, commentators were intrigued by the continuous slump in the value of the European Union’s collective currency, the euro, immediately after its launch in January 1999. This was engineered to favor the German economy: “The euro has given German manufacturing the weak currency it needs to counter high labor costs, and has created a single capital market across 11 countries, in which the German banks are ideally placed to thrive” (Spectator, June 17, 2000). German banks were very clever at obtaining share cross-holdings in the firms to which they lent.

Put these two facts together—the sudden acquisition of bullion and the coincident launching of a currency at a rate favorable to the EU’s most powerful national economy—and an extremely interesting picture emerges. “The Germans may have been preparing their greatest coup in history: the sudden, overnight substitution of a ‘new deutsche mark’ backed by gold, for the regrettably ‘failed’ EU collective currency,” the Economic Intelligence Review continued. “[I]n reality, the Bundesbank’s acquisition of colossal gold reserves coincident with the launch of the euro (which policymakers were never supposed to notice), and the convenience of the biggest competitive devaluation in history, betray the probable truth—that this represents the realization of the pan-German plan for a European collective currency elaborated by the Nazis, and was cunningly postulated from the outset. In other words, the euro’s steep depreciation is ‘not coincidental’” (op.cit.; emphasis added).

These facts are made all the more interesting by statements recently made by a senior Bundesbank official. When asked what Germany would do if a Greek default forced the ecb into insolvency, he responded that Bundesbank officials had already discussed how to deal with such a situation. “We have 3,400 tons of gold,” he said. “We are the only country that has not sold its original allotment from the [late 1940s]. So we are covered to some extent” (Vanity Fair, September 2011).

Is it possible that German elites could use their massive gold reserves to establish a gold-backed deutsche mark in the event that the euro fails? Here is what the late Christopher Story wrote in that March 2000 edition of the Economic Intelligence Review: “If Berlin were to decide that the progressive collapse of the euro, which is already well advanced, had ceased to be tolerable, it has already amassed the necessary reserves of gold to be able to float a ‘new deutsche mark’ unilaterally—leaving the rest of Europe at Germany’s mercy and prospectively left with no practical choice, under the circumstances, but to accept the new deutsche mark in lieu of the degraded euro ….”

Only time will tell how this situation will play out. However, if the Bundesbank does plan to introduce a gold-backed deutsche mark, it could well be that the day Greece defaults—which appears only a matter of time—is the day that Germany replaces America as the world’s most powerful nation, overnight!

Back in the heady European summer of 1990, when Germanic euphoria was high over the unification of East and West Germany, British politician Nicholas Ridley told the Spectator that “European Monetary Union, then being discussed seriously for the first time, was ‘a German racket designed to take over the whole of Europe. … You might just as well give it to Adolf Hitler, frankly …. I’m not sure I wouldn’t rather have the [bomb] shelters and the chance to fight back, than simply being taken over by … economics’” (June 17, 2000).

Well, Mr. Ridley, it took a decade, but the reality is that this time Germany has done it, not by bombs, but by sheer economic panache—and has fooled the whole world!

All that remains now is for German elites to carry out their solution to their deliberately created crisis—their real “final solution”!