Multiyear droughts, catastrophic wildfires, out-of-control deficits. Why is this happening to the Golden State? The answer will surprise you. 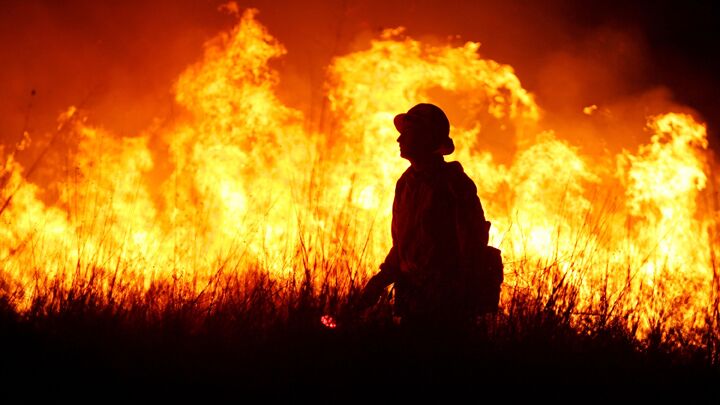 Multiyear droughts, catastrophic wildfires, out-of-control deficits. Why is this happening to the Golden State? The answer will surprise you.

This article was updated on Nov. 14, 2018, to reflect the latest catastrophic fires in California.

California is experiencing another crippling crisis. The wildfires ravaging the state are the deadliest and most destructive ever. Roughly 120,000 acres of valuable land have been incinerated, about 7,000 structures have been destroyed, and at least 48 lives have been lost. A quarter of a million people have had to flee their homes, while hundreds are still missing.

The fires this month are only the latest in a series of record-breaking wildfires. Seven out of the 20 most destructive wildfires ever to hit the state have occurred since October 2017.

California had a six-year drought at the end of the 1980s. From 2011 to 2017 it suffered through another multiyear drought. The time period from 2011 to 2014 was the driest since record-keeping began. The drought killed tens of millions of trees and depleted water reserves across the state. It finally ended in 2017, and Northern California had the wettest winter in a hundred years. But then massive floods caused $1 billion in damage to the road network alone.

Meanwhile, California’s debt crisis has worsened. The state is more than $150 billion in debt, the worst of any state in the United States. A detailed study of 2015 data concluded that state and local governments owe a total of $1.3 trillion. Other estimates are even higher.

Doesn’t it make you wonder: What is happening in California?

One disaster after another is striking California. These deadly disasters are repeatedly labeled the “worst ever”! … With all the disasters that have struck California the past few years, it’s as if the state is under a curse.

These fires revealed an even greater crisis. Reports say 20 of the 26 fires were set by arsonists! The Los Angeles area is seething with all kinds of hatred—which is only a microcosm of the entire nation. In many areas of the U.S., racial hatred is ready to explode like the Southern California firestorm. And we no longer have the WILL to implement the strong government action that is needed! …

The Rodney King and Reginald Denny trials … inflamed racial tension. The 1992 Los Angeles race riots were that city’s worst ever. They were some of the deadliest riots in U.S. history! Others fear riots will also occur in their cities. [That is a justifiable fear.]

In 1991, wildfires in Oakland, California, destroyed 2,900 structures, and 25 people died from the fires. These fires were the worst ever in California! The state is now struggling with a budget deficit that is the worst ever—by far—that any American state has faced!

A six-year drought ended in 1991. It was the worst ever in California! That drought was followed by heavy rains and flooding which caused the heavy growth of grass, shrubbery and weeds that led to the dangerous fires.

I believe we must now look more directly to the spiritual.

When He was on the Earth, Christ prophesied about the Elijah to come: “And his disciples asked him, saying, Why then say the scribes that Elias must first come? And Jesus answered and said unto them, Elias truly shall first come, and restore all things” (Matthew 17:10-11). Christ said that an Elijah would come to prepare the way for His Second Coming (Matthew 16:28; 17:1-4). The disciples were given a vision of the end time (verse 9). “But I say unto you, That Elias is come already, and they knew him not, but have done unto him whatsoever they listed. Likewise shall also the Son of man suffer of them. Then the disciples understood that he spake unto them of John the Baptist” (verses 12-13). The disciples knew that He spoke of John the Baptist. But remember, Christ said a modern-day John, or Elijah, would come and restore all things just before His Second Coming.

The disciples knew that Christ referred to John the Baptist. And Christ’s disciples today know who this modern-day John, or Elijah, was! They must know who he was or they could not do God’s work. His name was Herbert W. Armstrong. His headquarters was Pasadena, California.

Only he restored all things in this end time. (Many of God’s people remember when Mr. Armstrong spoke of 18 truths he restored to God’s Church.)

Only Mr. Armstrong preached the true gospel around the world, for the first time in almost 2,000 years! “And this gospel of the kingdom shall be preached in all the world for a witness unto all nations; and then shall the end come” (Matthew 24:14). Christ could not have made this prophecy if anyone had done the job between the first and 20th centuries! For example, if someone had preached the gospel around the world in the 12th century then that would have been a sign of the end of the age at that time! But it didn’t happen, because Christ prophesied it wouldn’t!

There is still another major prophecy about the end-time Elijah. “Behold, I will send you Elijah the prophet before the coming of the great and dreadful day of the Lord: And he shall turn the heart of the fathers to the children, and the heart of the children to their fathers, lest I come and smite the earth with a curse” (Malachi 4:5-6). Here again we see that Elijah came just before the Great Tribulation and Christ’s Second Coming. Only Mr. Armstrong taught the truth about God’s Family, and how we can be born into that Family. That is the real truth about the “born again” doctrine. Only Mr. Armstrong taught that the family is a God-plane relationship. That means the physical family was created and patterned after the God Family. The physical family is a training ground to prepare us to be born into God’s Family. We got that precious truth from Mr. Armstrong!

Here is the earth-shaking point. Mr. Armstrong was the modern-day Elijah. And, as pastor general of the Worldwide Church of God (wcg), he preached God’s precious truth to this world from Pasadena, California.

In an overt attack against Mr. Armstrong, the state of California, through the attorney general’s office, launched a massive lawsuit against the wcg in 1979. On January 3, that office initiated a sudden, armed assault on the Pasadena headquarters, in an attempt to claim ownership of the Church’s property and assets as well as its continuing income—in violation of the U.S. Constitution. A receiver, secretly appointed by the court, tried to take over and operate God’s Church. Completely false, outrageous and baseless allegations of financial mismanagement were made—despite financial and all other required records having been regularly and voluntarily filed. No evidence of wrongdoing was ever found, and on October 14, 1980, the attorney general dropped all charges and dismissed the case. Later, the higher appellate court ruled that the lawsuit was without foundation.

California is the only state that ever attacked Mr. Armstrong and his work. Actually, it attacked a lot more than that. California really attacked the living God!

When meting out punishment, God begins at His sanctuary (Ezekiel 9:6). The Church Mr. Armstrong founded no longer follows most of the doctrines he taught! In principle, God begins where His own sinning Church is, especially their headquarters in Pasadena. And in general, that principle applies to the state where God’s sinning headquarters is. So it is fitting that God begins the worst part of His punishing America in California. The headquarters of God’s own sinning, Laodicean Church was there.

Is there a connection to what is happening in California and God’s work through Herbert W. Armstrong? The whole world must come to see that there is! California was saturated with God’s warning message more than any other state. Mr. Armstrong also warned the whole world. Now God is going to humble Israel and also all of mankind. Then Jesus Christ is going to rule this Earth.

Is God cursing California? The book of Daniel is a book for the latter day—the time we are living in right now (Daniel 12:4, 9). Daniel prophesied to those of us in this end time about other end-time prophecies in the first five books of the Bible. “As it is written in the law of Moses, all this evil is come upon us: yet made we not our prayer before the Lord our God, that we might turn from our iniquities, and understand thy truth” (Daniel 9:13). Evil comes upon us because of our sins. Daniel is referring specifically to the curses in Leviticus 26 and Deuteronomy 28. Read about all the blessings God gives if we obey (Deuteronomy 28:1-14) and then notice the curses.

Let’s read a few of those verses: “But it shall come to pass, if thou wilt not hearken unto the voice of the Lord thy God, to observe to do all his commandments and his statutes which I command thee this day; that all these curses shall come upon thee, and overtake thee: cursed shalt thou be in the city, and cursed shalt thou be in the field. Cursed shall be thy basket and thy store. Cursed shall be the fruit of thy body, and the fruit of thy land, the increase of thy kine, and the flocks of thy sheep. Cursed shalt thou be when thou comest in, and cursed shalt thou be when thou goest out. The Lord shall send upon thee cursing, vexation, and rebuke, in all that thou settest thine hand unto for to do, until thou be destroyed, and until thou perish quickly; because of the wickedness of thy doings, whereby thou hast forsaken me” (verses 15-20). Repeatedly, God talks about curses.

These curses are to come upon Israel—mainly the American and British peoples—because it has forsaken God!

God does punish us with “natural” disasters. “Thou shalt be visited of the Lord of hosts with thunder, and with earthquake, and great noise, with storm and tempest, and the flame of devouring fire” (Isaiah 29:6). God says He visits, or punishes, us with “the flame of devouring fire”! Those fires could be caused by race riots or the Santa Ana winds. It doesn’t matter how the destruction comes—God is allowing it or sending it!

How much we suffer is in our own power to control. God help us to repent soon. Only then can we avoid the far greater curses that are prophesied to strike very soon!

“The Lord shall cause thine enemies that rise up against thee to be smitten before thy face …” (Deuteronomy 28:7). This is how God blesses the nations of Israel or God’s Church if they obey.

Is God now intensely cursing California for its attack against the living God’s work under Herbert W. Armstrong?

“Vengeance is mine; I will repay, saith the Lord” (Romans 12:19). Is God now taking vengeance against that state for what it did to His work? Yes, He is! And California is only the beginning.

The sooner we repent, the sooner the curses will end.

Please look at the four full-page advertisements that Mr. Armstrong ran in the Wall Street Journal during his battle with California. Then you can better understand that spiritual warfare.

Our free booklet Why ‘Natural’ Disasters? will help you understand more about why God sends weather curses. Why does a loving God allow this kind of suffering? What can you do to protect yourself? And will it ever end. Our booklet answers these questions and many more.

From The December 2003 Philadelphia Trumpet
View Issue FREE Subscription
Next