One can’t help but sigh and cry. 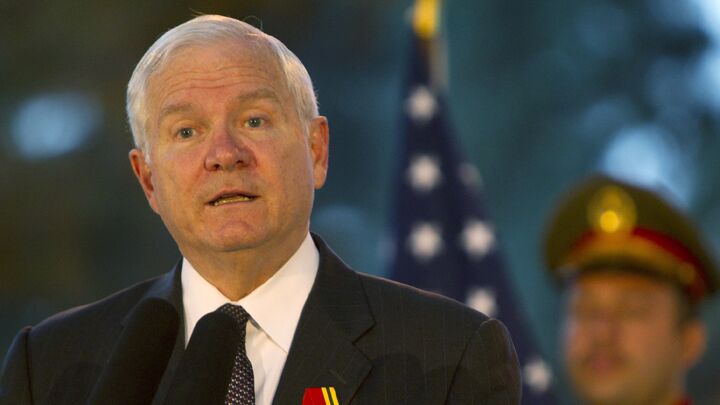 One can’t help but sigh and cry.

The talk in global political circles is that the U.S. is washed up. America’s defense secretary, traveling to China in January, addressed the gossip. “I’ve watched this sort of cyclical view of American decline come around two or three times, perhaps most dramatically in the latter half of the 1970s,” Robert Gates said. “And my general line for those both at home and around the world who think the U.S. is in decline is that history’s dustbins are filled with countries that underestimated the resilience of the United States.”

Maybe. But it seems hard to underestimate the U.S. these days.

The secretary’s words ring especially hollow when you look at where he was heading. China has plenty cause for a low estimation of the United States. America owes it probably a trillion dollars. And China looks poised to single-handedly neutralize America’s robust, decades-long influence in the Asia Pacific thanks to a military spending binge that will yield aircraft carriers, stealth planes and aircraft-carrier-killing missiles.

Meanwhile, Secretary Gates, just days earlier, announced that America will slash military spending by $78 billion. The contrast between a country rising and a country sliding is stark.

It’s painful to watch someone you love dying of a terminal sickness. The same must be said of seeing a country you love die.

America suffers with several ills from which it will not recover. This reality is becoming inescapably plain. There is hope—a bright, shining, sure hope for this country. But it is most certainly not to be found in any of the sources that naive optimists look to. We must face facts.

The virtues America once embodied have largely faded. The blessings America once enjoyed have been squandered. America’s military dominance is proving inadequate. Its wars are proving impossible. Our allies are leaving us. Our enemies are provoking us.

The epic indebtedness to China and the shrinking military are both symptoms of an irreparably broken economy. Not only has America’s fiscal irresponsibility gone on too long to correct, the country shows no sign of having the will to even try.

The nation simply will not recover from this condition before it pays dearly for it. The last Congress racked up a stupefying $3.22 trillion in debt in two quick years. After an election that supposedly rebuked Washington for its profligacy, Republicans agreed to a spending bill that will add another trillion to the debt.

This new Congress will not reverse this juggernaut trend. Newcomers agitating for change face a House controlled by one party, a Senate controlled by the other, and a president with veto power and a bulldog determination to keep expanding the government.

And, truth be told, he’s got the people behind him. Maybe not for healthcare. But Social Security, Medicaid and Medicare represent more than $100 trillion in unfunded liabilities—and no politician plans to lose his job trying to prevent those programs from bankrupting the country. The problem isn’t Obama: The wild spending, the disastrous deficits, the entitlements, the bailouts—these all started with his “conservative” predecessor. The problem is Washington—and the voters that decide who to send there.

The children of hard-bitten, self-reliant settlers who conquered the West have become grabby government dependents.

The nation’s spreading economic and political sickness is matched by its moral decline. Despite warnings from military leaders and front-line soldiers of how it will hurt America’s fighting capability, civilian leaders decided that homosexuals can now freely serve in the military. At a press conference celebrating this policy “victory,” the president said his views on same-sex “marriage” are “evolving.” Those views, like those of the public, will never “evolve” back to upholding the plain definition of marriage that has underpinned stable families and strong societies for millennia.

As if the stabilizing force of family isn’t being rocked enough. Out-of-wedlock births and single-parent households, once associated with inner-city poor, are now common among the rural white working class as well. In the nation’s capital, more than half of family households are run by single parents. In one area of Washington, only a quarter of homes contain a functioning marriage; of the remaining homes, nearly 9 in 10 are run by women.

No wonder 40 percent of Americans think marriage is becoming obsolete: A generation is growing up without even seeing what it is supposed to look like. Fractured families breed more fractured families. This is a sickness that simply will not heal.

The litany of such problems goes on and on. Each headline shows a bleaker prognosis, a new pain, another symptom bound only to get worse. “The passing of the Christian West signifies the end not only of a worldview, but of a character type—one based on honor, family, self-help, blood-and-soil patriotism, personal responsibility and a God-centered moral order,” wrote Jeffrey Kuhner. “Self-indulgence and self-expression have filled the vacuum. Life is no longer about sacrifice and duty; it’s about maximizing pleasure and self-fulfillment.”

Viewing this, one can’t help but sigh and cry—as the Prophet Isaiah did, speaking prophetically of America today: “Ah sinful nation, a people laden with iniquity, a seed of evildoers, children that are corrupters: they have forsaken the Lord, they have provoked the Holy One of Israel unto anger, they are gone away backward. … [T]he whole head is sick, and the whole heart faint. From the sole of the foot even unto the head there is no soundness in it; but wounds, and bruises, and putrifying sores: they have not been closed, neither bound up, neither mollified with ointment” (Isaiah 1:4-6). It’s painful to watch, particularly in a country you love.

Secretary Gates may have been technically accurate. But the far more relevant truth is that history’s dustbins are filled with countries that overestimated their own resilience.