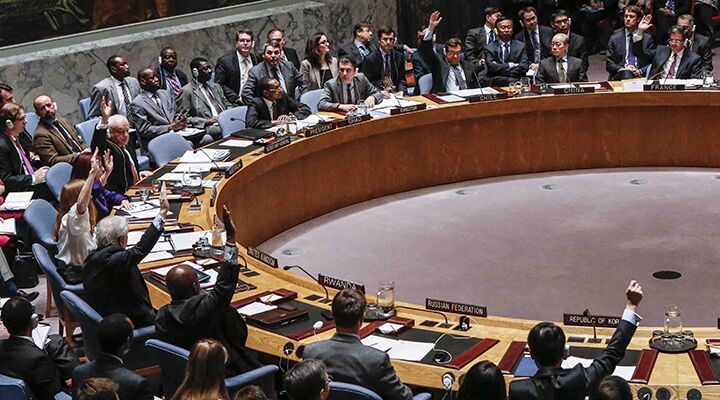 The Philadelphia Trumpet, in conjunction with the Herbert W. Armstrong College Bible Correspondence Course, presents this brief excursion into the fascinating study of the Bible. Simply turn to and read in your Bible each verse given in answer to the questions. You will be amazed at the new understanding gained from this short study!
From The March 2011 Philadelphia Trumpet
View Issue FREE Subscription

Five years after the close of World War ii, Winston Churchill declared in a speech in Copenhagen, “Unless some effective world supergovernment can be brought quickly into action, the proposals for peace and human progress are dark and doubtful.”

In the early 1960s, noted nuclear physicist Edward Teller, who helped develop the hydrogen bomb, warned, “We must work for the establishment of a world authority sustained by moral and physical force—a world government capable of enforcing worldwide law.”

Since then, an unprecedented number of international and regional bodies of all shapes and sizes—political and financial institutions, aid organizations, non-government organizations, judicial institutions—have emerged to play a role in global affairs. Today we have the Nuclear Energy Agency, the World Bank, the International Monetary Fund, the International Chamber of Commerce, the G-8 and G-20, the Commonwealth, the North Atlantic Treaty Organization, the Council of Europe, Greenpeace, Freedom House, Amnesty International, and the list goes on and on and on.

And of course, we have the United Nations. Despite its 60-year track record of malfunction and failure, the UN Commission on Global Governance in 1995 recommended far-reaching changes for the UN, including a system of global taxation, a standing UN army, an international criminal court, expanded authority for the secretary-general and the formation of a world parliament, among other things. Only the court was created—in 1998.

After World War ii, the call went out from many highly esteemed people for a world government to be set up to solve mankind’s problems. Serious-minded scientists and world leaders know that the solution to world ills and the establishment of world peace is possible only if all nations are brought together under a supreme, all-powerful, world-ruling government!

We have created many such institutions. Yet look at this world. International coalitions and organizations and government have not solved our problems. In fact, in many instances they have made problems worse.

Doesn’t it make you wonder …

“World government is still a long way off,” declared A. F. K. Organski in the book World Politics. “The creation of a world government through the voluntary agreement of existing nations is so unlikely that we can say flatly that it will never happen” (emphasis ours throughout).

Hans J. Morgenthau, in his book Politics Among Nations, asserted: “There is no shirking the conclusion that international peace cannot be permanent without a world state, and that a world state cannot be established under the present moral, social and political conditions of the world.”

What a paradox! World leaders realize that man’s most urgent need is world government. Yet others admit that such a government is a total impossibility under present world conditions!

Viewing the history of mankind, anyone can plainly see that men have utterly failed to bring about world peace and prosperity. Fear, hatred, disease, poverty, oppression and injustice have been rampant throughout history.

What about it? Is world government impossible—an idle pipe dream of unrealistic optimists? Is the idea of a soon-coming utopia on Earth merely an absurd myth?

If our only hope lies in the efforts of men, then a utopia is not possible, and humanity is doomed!

How World Government Will Come

People today fail to recognize any power other than their own that could bring about a literal utopia on this war-torn, problem-filled Earth.

What great power can, and will, do this?

God Almighty! He has the power and the wisdom to make utopia a reality!

This is the very message God sent Jesus Christ to proclaim to the world. It is the “gospel”—the good news—that Christ will return with the power of God to bring us universal peace and prosperity!

Few today understand that God has allotted mankind 6,000 years in which to rule itself. During this time, God has kept hands off the affairs of men. He has allowed man to pursue the course that seems right to him (Proverbs 16:25). God has given man the opportunity to prove, by experience, the basic inadequacies of any form of human government.

God is allowing humanity to prove to itself that nohuman form of government can bring world peace!

Your Bible shows a literal utopia is ahead! It will be a time of spiritual and physical rejuvenation—1,000 years of boundless peace and prosperity! Let’s take a look into the future through the prophecies of the Bible, so you can know what that wonderful World Tomorrow will be like!

comment: At His return, Christ will have to powerfully subdue the world and force mankind to submit to His rule. As verse 15 mentions, He will use a “rod of iron,” symbolizing absolute authority. He will rule with power, not hesitating to use it when necessary. A world that has been deceived and influenced by an invisible devil (Revelation 12:9) must be ruled rigidly until it learns the positive fruits of living God’s way!

Christ’s government will begin at Jerusalem, where His headquarters will be located (Jeremiah 3:17). As His rule spreads over the whole Earth, all rebellious nations will be brought into line.

2. How will Christ deal with those nations that refuse to come to Jerusalem to worship God the way He commands? Zechariah 14:16-19.

comment: It is true that God will rule with power and authority, but it is only human rebellion that necessitates harshness. God is not a stern, cruel monster as some have falsely implied. God wants man to be really happy! But God knows that the only way to lasting happiness is obedience to His laws!

Gradually, as men obey God’s laws, they will wake up to the wisdom and justice of God’s rule and will submit gladly to His authority. A “rod of iron” will no longer be necessary.

During the Millennium, God will teach mankind the laws that produce happiness. He will give each individual the choice, after learning His laws and seeing the happiness they produce, of whether to obey God’s laws or not. The vast majority of mankind will see God’s way is truly best and will voluntarily choose to obey Him.

But before men can really choose, they must clearly see the alternatives. They must be reeducated so they can see through old prejudices and discern true values.

1. In addition to ruling as supreme King over all nations, will Christ also be the supreme Educator? Isaiah 2:3; Psalm 25:8-10.

comment: Christ will unite these two functions in Himself. In God’s pattern for world rule, religion and government are not separate. They will be consolidated and harmonized in the World Tomorrow!

When God intervenes in human affairs, it will not be left up to the people to vote in their own rulers or choose their own teachers. In the World Tomorrow God will appoint His resurrected saints to be the rulers and educators. They will teach the people all of God’s laws and statutes, which are the way to peace, prosperity and happiness!

comment: In the World Tomorrow, those now qualifying to rule under Christ will be ever present and ready to speak or act, both to teach and to prevent potential criminal action.

Because they will be composed of spirit, they will be able to come and go as necessary and to pass through walls or simply disappear, just as Christ was able to do after His resurrection (John 20:19, 25-27; Luke 24:31).

2. Will universal knowledge and obedience to God’s way lead to universal peace? Isaiah 11:9.

comment: God will soon halt this world’s mad plunge toward nuclear cosmocide. He will send Jesus Christ to intervene in world affairs and put down all rebellion. Then He and His saints will begin teaching the nations God’s truth and His laws—His ways that bring blessings, prosperity, peace and happiness.

The utopian paradise which mankind has always longed for will finally be ushered in. Men will at long last wake up! They will finally see through the veil of prejudices that have prevented them from following the way that would bring the fulfillment of their true desires.

The millennial world will be filled with happy people guided, helped, protected and ruled by Christ and the saints. And all human beings will be called by God to inherit everlasting life in supreme happiness and thrilling joy!

What a fabulous world that will be!

Although a utopian paradise is indeed impossible by the hands of men—none of this world’s governments can bring us true peace, prosperity and abundance—your Bible shows the great GOD of heaven and Earth can and WILL PRODUCE utopia on Earth … SOON!

May God speed that glorious day!