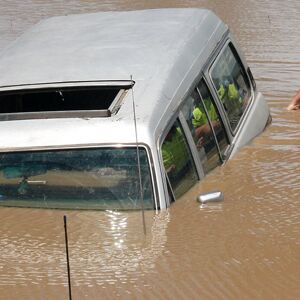 Devastating floods affecting three continents are having drastic impact on both national and global economies. Why this surge in “natural” disasters?

Dramatic images of the devastating floods in Queensland, Australia, were transmitted globally over the past two weeks via the mass media. While the floods in Australia got the big headlines internationally, far greater loss of life was suffered as a result of massive floods and mudslides in Brazil. In recent months, floods in Pakistan, Colombia, the Philippines and Sri Lanka have also impacted huge swathes of those countries, disrupting thousands of lives, leading to many deaths and much property loss.

The difference between the floods in Queensland and those in other regions recently hit with unprecedented monsoon rains is the extent of damage to not only Australia’s national economy, but also to the global economy that has resulted.

For years Australia has placed its economic eggs in one basket, that of the export of raw materials—essentially coal, iron ore and other minerals. The fact that Queensland produces around half of the world’s coking coal, which is used to make steel, has already escalated the cost of both coal and steel globally.

Queensland’s Premier Ann Bligh told Australia’s Seven Network television station, “Seventy-five percent of our mines are currently not operating because of this flood, so that’s a massive impact on the international markets and the international manufacture of steel.”

The national growth rate of Australia’s economy is expected to be reduced by a full percentage point due to the Queensland floods. The Queensland Resources Council has said the floods have already cost $1 billion in delayed coal production, while the state’s resources minister says the industry is losing $100 million a day.

Over the past two decades, record losses have increasingly been posted globally as a result of so-called natural disasters. Each year brings more disasters that set new records in their devastating effects.

What’s it all about? Why this surge in “natural” disasters over the past 20 years?

Well, it’s certainly not “global warming”! But that’s another story, which we have reported on in the past.

Statistics prove natural disasters have risen startlingly since 1990. In a law-abiding universe, there has to be a reason for this.

On reflection, clearly 1989 was a watershed year, a threshold from which natural disasters escalated most dramatically compared to past eras in recorded history.

Destruction of rural land, devastation of food stocks, damage to agrarian and industrial infrastructure, negatively impacted distribution systems, resultant food shortages, escalation of food and livestock theft, all these are results of an increasing rate of weather-related catastrophes sweeping the globe.

Why such drastic escalation in natural disasters since 1989—earthquakes, tsunamis, destructive storms, floods, fires, mudslides, extremes of temperatures—which take the figures right off the record charts since statistics began to be recorded?

Well, there is a reason. But it is only apparent to those who, in unbiased, clear-minded fashion, link the facts on the ground with the history of the past and the reality of inerrant Bible prophecies for the future.

Why can we point to the year 1989 as the break point, the watershed, from which there have been 20 years of rapidly accelerating incidences of disaster across this world?

Jesus Christ showed the Apostle John, in vision, a keynote prophecy for our day forecasting that we would reach a time when events He had prophesied for our generation would be no longer delayed. Referring to that prophecy, which is contained in Revelation 10, our editor in chief has declared, “We are in a time of no more delay (verse 6), and I believe that is the major reason why our commission has changed from preaching the gospel around the world to prophesying again (with the emphasis on warning)” (Prophesy Again: God’s Commission to His End-Time Church).

To a mind truly opened to receive and understand Bible prophecy, one can easily prove that the prophesied “time of no more delay” began on Dec. 7, 1989.

A study of our books Mystery of the Ages and Raising the Ruins clearly exposes this. Add to those The United States and Britain in Prophecy, and the picture as to the reason for today’s escalation in natural disasters becomes clear.

Ever since December 1989 the world has increasingly destabilized—through accelerating natural disasters, political upheavals, wars and rumors of wars, economic and financial disaster and great moral and social disintegration.

This will continue until humankind gets the message—the message that there is a great omnipresent, omniscient Creator and Sustainer of this universe who created humankind with an incredible human potential—a potential to which man remains blinded by a power set on destroying it! (John 8:44).

It is the blind rebellion of humankind against their Maker that is causing so many curses to befall man in our generation. And that rebellion has been led by the very nations that should have shown and taught people of this world how to live in subjection to their Creator!

As a result, God declares great curses on those nations because of their national rebellion against Him (Deuteronomy 28). That’s what’s really behind this current escalation in natural disasters.

The work that sustains this website, the Trumpet magazine and the Key of David television program, exists for one reason: to expose to this world the fact that there exists an all-powerful God “Declaring the end from the beginning, and from ancient times the things that are not yet done, saying, My counsel shall stand and I will do all my pleasure” (Isaiah 46:10).

Only when one’s mind is opened to that great, overarching reality can one comprehend why natural disasters, what is their true source, where they are leading in the immediate future, and the great result they are designed to achieve, ultimately, for all humankind.